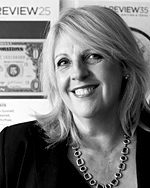 Dr Julianne Schultz AM FAHA is the founding editor of Griffith Review and Emeritus Professor of Media and Culture in of the Griffith University Centre for Social and Cultural Research. She is chair of the board of The Conversation and a member of the board of the Sydney Writers Festival. She is an acclaimed author of several books, including The Idea of Australia: A search for the soul of the nation (Allen and Unwin), Reviving the Fourth Estate (Cambridge) and Steel City Blues (Penguin), the co-author of The Phone Book (Penguin) and editor and principal author of Not Just Another Business (Pluto). She also wrote the librettos to the award-winning operas Black River and Going Into Shadows. She has contributed chapters on media, culture, technology, and gender to many other books.

Julianne  became a Member of the Order of Australia for services to journalism and the community in 2009 and an honorary fellow of the Australian Academy of Humanities the following year. She is a thought leader on media and culture and an accomplished public speaker and facilitator. She has served on the board of directors of the ABC, Grattan Institute and Copyright Agency, and chaired the Australian Film TV and Radio School, Queensland Design Council and National Cultural Policy Reference Group and a member of advisory boards with a particular focus on education, journalism, innovation and culture.

Settling and making a place
Edition 61: Who We Are

The Uses of Culture

More than a job
Edition 45: The Way We Work

Stories to live by
Edition 42: Once Upon a Time in Oz

The more things change…
Edition 41: Now We are Ten

Searching for the next big thing
Edition 13: The Next Big Thing

Masters of the universe: How nigh’s the end?
Edition 12: Hot Air

Reports from the front
Edition 11: Getting Smart

Casualties in pursuit of paradise
Edition 14: The Trouble with Paradise

Beyond the Brisbane Line
Edition 9: Up North

An idea whose time has come
Edition 17: Staying Alive

Colliding worlds of people unlike us
Edition 8: People like Us

Seeing and making the future
Edition 18: In the Neighbourhood

The ideology of religion
Edition 7: The Lure of Fundamentalism

The year cities ate the world
Edition 20: Cities on the Edge

Coming and going in the global village
Edition 6: Our Global Face

The tail that wagged the dog
Edition 21: Hidden Queensland

End of another era
Edition 25: After the Crisis

A brilliant career on the edge
Edition 26: Stories for Today

We are what we eat
Edition 27: Food Chain

Cashing in the chips
Edition 28: Still the Lucky Country?

In praise of experts
Edition 31: Ways of Seeing

Storytelling, sense-making
Edition 33: Such Is Life

Life in a time of disasters
Edition 35: Surviving

The land - dreams and disappointments
Edition 2: Dreams of Land

A question with many answers
Edition 36: What Is Australia For?