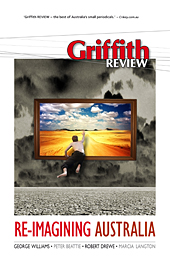 First define, then see and act

THE EXISTENCE OF of a vast landmass at the bottom of the southern hemisphere had entered European consciousness – like unseen creatures in the bush at night, present but not visible – well before the last continent was mapped.

Fanciful tales gleaned from Dutch and Portuguese explorers left hints that were easily embellished, but impossible to prove. Captain Cook's journey to record the transit of Venus in the southern skies, which provided his king with the bonus of an immense new land, added to the haunting mystique – thanks in large measure to Joseph Banks' collection of hitherto unknown plants and animals.

The great southern land awaited exploration, description and categorisation. It was at once a blank slate –terra nullius – waiting to be filled, and a unique unknowable place occupied by people speaking languages never before heard.

The settlement and development of Australia over the following centuries has, as a result, been as much an exercise of imagination as one of practical application.

Australians are said to be suspicious of grand visions and rhetorical flourishes, so the physical achievements are celebrated more readily than the visionary imagining that has underpinned them. The dustbin of Australian history is full of forgotten stories about people with grand ideas of an egalitarian, innovative society blossoming in a harsh yet productive land. Some proved misguided and far-fetched, while others have borne fruit for decades.

The country we know today is a product of them.

IT IS A philosophical truism to say ‘first we define and then we see', but it applies with telling resonance to understanding the nation that has evolved in the great southern land mass.

For much of the last two centuries, Australia has been defined by what it was not: not in the northern hemisphere, not densely settled, not lush and fertile from coast to coast, not constrained by the limits of class, nor by a densely documented or revolutionary history. What it is not provided raw material for countless writers and artists as they struggled, with varying degrees of success and originality, to squeeze the things they saw and encountered into the template embedded in minds informed by history and tradition. Over time the energy and vision of nationalists slowly tipped the scales and new definitions emerged.

The tension between what it is and what it is not, is there in the great novels and paintings: harshness and beauty, small-mindedness and expansiveness, subservience and larrikinism.

D.H. Lawrence captured this with telling – and remarkably enduring – insight in Kangaroo, the novel he wrote after living in Australia for three months in 1922. Like many Englishmen (and Irish, Scots, Germans, Italians, Greek, Chinese, Indians, Americans, Poles ...) before and since, Lawrence arrived imagining a blank slate, a place on which he could impose his will unfettered by entrenched interests and history: ‘He had come to this new country, the youngest country on the globe, to start a new life and flutter with a new hope.'

Instead he found a ‘peculiar, lost, weary aloofness ... it didn't seem to be real, it seemed to be sprinkled on the surface of a darkness into which it never penetrated'. The bush spooked him, but the ease of life enchanted, and for the first time he found himself in a ‘real democracy – in spite of all disparity in wealth. The instinct of the place was absolutely and flatly democratic, a terre democratic.'

THIS SPIRIT WAS on display in the lead-up to the 2007 federal election. After a campaign that seemed to last all year – pitching a government that had proved unassailable for more than a decade against a measured opposition in countless journeys to air-conditioned shopping centres – there was something ‘absolutely and flatly democratic' about the outcome.

The Labor Party won by one of the biggest swings in Australian electoral history. Yet there was little drama or rhetorical passion; even the tragically Shakespearian dimension of John Howard's loss was oddly two-dimensional. ‘Relief' was the word that seemed to capture the zeitgeist.

In his first weeks in office, without vitriol or blame, Prime Minister Kevin Rudd set about quietly and quickly undoing many policies, implementing his agenda – ratifying the Kyoto Protocol, welcoming refugees detained in makeshift Pacific Island detention centres, demanding answers on Indigenous injustice and homelessness, beginning the withdrawal of troops from Iraq and calling a pre-Christmas meeting of the Council of Australian Governments.

EARLY IN THE the campaign, the media defined the contest as a schoolyard battle between scrapping kids each yelling ‘me too, me too'. Neither side discouraged this characterisation – the Coalition hoped it might draw back those whom the polls emphatically said all year it had lost, and Labor did not want to spook those who had come to think of themselves as cautious and comfortable.

With the benefit of a couple of weeks of hindsight, it became clear that this characterisation was a commentary on the performance, not the play.

Labor's key electoral commitment to ‘end the blame game' between Canberra and the states seemed pragmatic and important, but almost trite – a way to fix self-evident shortcomings in health and education.

It may prove to be trite, but it may be profound. Ending the blame game sounds easier than it will be. Entrenched interests – states, public service, business, professions, unions and community groups – will fight hard to protect their privileges and the routines of power they have come to take for granted. Australia is even less a blank slate now than it was when white settlement began – a workable system has evolved, and vested interests have been accommodated. They may be convinced that there is a need for change, but the reality will be harder, bound to make life – albeit temporarily – more difficult.

Ending the blame game, despite saving billions of dollars each year, will not be an easy story for the media to report. Every interest group with a grievance will be able to tell stories of injustice that will grab headlines and threaten to slow down or derail the process. Yet it could, with conscientious leadership, careful management and creative engagement become another of the great periods of practical reform to renovate the systems of government for a new century – a project that has already happened in many comparable countries.

When the Hawke government was elected in 1983, the promise was to end the bitter division which had marked the Fraser years. Consensus was the buzzword; tripartite conferences – of government, business and unions – were the modus operandi. There was little to suggest the scale of change that would evolve over the following thirteen years. Over this time, the Hawke and then Keating governments delivered the most profound economic changes since Federation: tariffs striped back, currency floated, economy deregulated, centralised wage fixing abolished, the Reserve Bank granted independence, state-owned enterprises privatised.

There is now a need to do something similar with the system of governance, to address the relationship between the states and Canberra which has already changed profoundly since Federation when the states held the upper hand, to finally resolve the relationship with the first Australians and to set up a way of managing an ecosystem which is more fragile than even the founding fathers, after years of drought, imagined. Both practical and symbolic actions will be required, and success will grow from re-imagining Australia as what it is now, rather than what it once was, or is not.

The once-in-a-generation alignment of Labor governments from coast to coast presents an historic opportunity for renovation of the system of governance in a way that makes sense for a new century in which nations and people are more interconnected than ever, the population is more diverse and mobile, the legacies of the past are better understood, and the environmental challenges are more substantial.

IN MANY WAYS, Australia evolved as a great Enlightenment project. It quickly outgrew its settlement rationale to relieve the overcrowding of British jails and evolved a vigorous political culture. Those living in the colonies devoured the journals of intellectual and political thought that emanated from Europe and America – keen to learn the lessons and advance debates. Although there was no treaty with the Indigenous people, slavery was virtually unknown and freedom of the press, mandatory education, universal suffrage, and separation of church and state, were accepted in Australia well before they were in other countries.

Australians still voraciously consume political, intellectual and social ideas from abroad, but the confidence needed to adopt and adapt them has waned. As attention has focused on the United States over the past decade, the profound changes in systems of governance and social relations in Britain and many other countries have passed without much comment, but will need to come back into focus if we are to re-imagine Australia as a place for the twenty-first century.

Turning terre nullius into terre democratic between 1788 and 1901 was an act of great political imagination. It was not perfect and is not complete. But to create a vigorous, innovative and pragmatic society – a unique product of the legacy of European sensibilities, Enlightenment ambitions and home-grown nationalism – was a remarkable product of political imagination.

The transformation of penal colonies on a remote island in the southern seas into a nation with a system of governance that was the envy of the world and with relatively little bloodshed, is one of the great nation-building stories. But it is not one that is well known or celebrated.

Australians have become accustomed to thinking of their history as conservative, practical, cautious and inward-looking – to see the country as a place where change is not welcome, ideas are just coffee-chat and narrow self-interest prevails. But the creation of the vibrant and successful place this country has become suggests a different reading of history, of a people who valued innovation, ambition and creativity, ready to take risks and engage with the world.

It is time to revive the progressive history of Australia, to draw lessons from past achievements and to begin the process of creating a future that is innovative and practical and once again a model for the world.