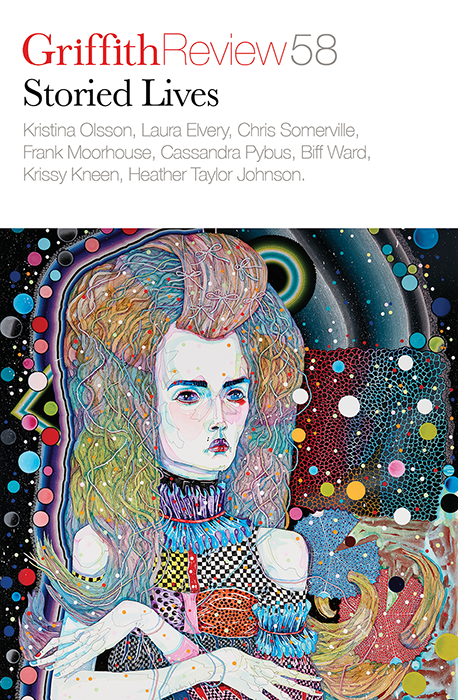 Stories we tell ourselves

Terra nullius of the mind
by Julianne Schultz

‘NATIONS TELL THEMSELVES stories,’ the Irish commentator Fintan O’Toole wrote recently. ‘They are not fully true, they are often bitterly contested and they change over time. But they are powerful: they underlie the necessary fiction that is “us”. And at the moment it is not quite clear what the Irish story is.’

This may be one of the universal truths of the early twenty-first century as globalisation and digitisation have disrupted the economic order everywhere, migration has changed national complexions, the collapse of the mass media has weakened the democratic feedback mechanism, and those once silenced or ignored by the mainstream are finding their voice.

In this rapidly changing environment, new stories are needed: stories that connect, engage, explain and challenge; stories that need to be nurtured, added to, discussed, debated and allowed to flourish; stories that are both specific and universal; stories that allow nuance, diversity and complexity.

That Fintan O’Toole, winner of both the Orwell Prize for Journalism and the Commentator Award in the European Press Prize Awards, should come to this conclusion about his homeland, a country whose storytelling is one of its defining characteristics, gives pause for thought. The great Irish poets, novelists and playwrights have crafted a series of enduring narratives that continue to define Ireland: Catholic, rural, depleted by famine and ­emigration, yet resilient.

The old stories can still resonate, but they no longer ring true as Ireland is now, as O’Toole notes, ‘a pluralist society with a mono-cultural hangover’, an economy powered by technology and chemical exports, and a population more likely to describe themselves first as European then as Irish. The world sat up and took notice that something had changed when, a year before the centenary of the Easter Uprising, Catholic Ireland voted to legalise same-sex marriage, and the following year elected Leo Varadkar, the gay son of an Indian immigrant, prime minister.

O’TOOLE COULD HAVE been writing about Australia, where the old stories have also become threadbare, and increasingly fail to capture the contemporary reality or the complexity of the past.

In Australia these tales also sound thin and one dimensional, like music on a dusty vinyl record that has been played a few too many times. New versions might seek to add nuance and complexity, but are quickly dismissed; gate­keepers are standing guard and show no sign of budging, prepared to wage a contest that is more bitter than ever.

Yet according to last year’s census, the Australian population has never been more diverse, with a larger proportion of people born overseas than at any time since the 1890s. Also, the First Australians are no longer prepared to be rendered invisible and silent. At the same time, distance is no longer such a tyrant, and the world is watching.

But any discussion about the contemporary idea of Australia is quickly shut down, doused in overlarded clichés, leaving people to create their own realities without the enrichment that comes from interrogating complex layers of history and experience.

Hectoring politicians are all too ready to declare those with a different point of view ‘un-Australian’, but find it increasingly difficult to define what is uniquely and distinctively ‘Australian’. The Prime Minister had a stab at it earlier in the year when he said the country, which he proudly describes as the greatest multicultural success story in the world, could be defined by its values – which he then struggled to articulate. He suggested ‘respect, the rule of law, commitment to freedom, democracy’. Others chipped in with the old faithfuls – ‘egalitarian’, ‘land of the fair go’, ‘mateship’.

These are hard to dispute, but are scarcely unique.

In politics, there is a glaring gap between words and action. As every parent knows, children are more likely to respond to what you do than what you say. So when political leaders praise multiculturalism but make citizenship more difficult to attain and target individuals, or when they talk about preventing desperate refugees from dying at sea but leave them to languish in offshore refugee camps, or when they promise to recognise Indigenous rights but call a measured discussion about first settlement ‘Stalinist’, the message is clear and hypocritical.

This is not fertile soil for cultivating a new crop of stories that help us make sense of ourselves and describe a country where the population has nearly doubled since 1975; where the externally focused economy is now powered by services, education and minerals rather than agriculture and manufacturing; where the bush is not a place most people or their forebears have lived, but somewhere to consider visiting on holiday if there is no better international deal on offer at Flight Centre.

As O’Toole noted, nations and people ‘need a sense of collective purpose, a sense that there is something that they belong to and that belongs to them. All the evidence is that if one set of stories no longer makes sense, people do not simply become realists. They become prey to any old story at all, especially one that has a potent contrast between Us and Them.’

THANKS TO SCHOLARLY research it is possible to demonstrate that the Prime Minister’s description of national values is not helpful in defining what makes this country unique or distinctive. Last century, transnational companies hired social scientists to study national values, to help them find a better, more profitable and congenial foothold in the diverse places they operated. Gone were the days of colonial trade when an imperial mother country could impose its values and expect compliance. By the mid-­twentieth century, global corporations could put a dollar value on understanding national difference – so that in Australia you could expect your hamburger to have beetroot, tomato and lettuce instead of pickles.

Social psychologist Shalom Schwartz has been at the forefront of international research on the cultural values of nations for years. He and his colleagues have developed a series of characteristics that help define difference by testing the attachment to harmony, belonging, hierarchy, mastery, intellectual and affective autonomy and egalitarianism. Schwartz and his colleagues surveyed eighty cultural groups in seventy-seven countries to plot similarities and differences.

Professor Nick Haslam from the University of Melbourne has studied the results, and found that Australian values ‘fall very much in the middle of the pack on every cultural dimension’. Australians are not uniquely tolerant, nor do we distinctively value mastery, respect, rule of law, fairness, equality or intellectual autonomy. The only measure on which Australians were beyond the mean was in having fun – ‘affective autonomy’ – but even on this measure people in nineteen other countries proved more committed to pleasure. As Haslam concluded, ‘Australia is the second least distinctive culture of all, beaten to the gold medal by Brazil. It is hard to escape the conclusion that what is unique about Australian values is their averageness.’

FILMMAKER RACHEL PERKINS is one of a number of brilliant young Australians creating and telling the stories that go beyond this blandness. She’s willing to explore history and the suburbs, to put together something truly unique and distinctive. At a time when others of her generation struggle to come up with a way of defining Australia from the global bland, her heritage gives her a perspective that enables her to cut to the chase. ‘What is truly unique, and cannot be replicated anywhere else, is that Australia is home to the oldest living culture in the world,’ she says. Forty thousand years of settlement speaks to remarkable human resilience, something to cherish and learn from, not ignore or vilify.

This is a profound insight. It begs many other questions about what has happened over the past two centuries – while many other layers have been added, her remark is undeniably true and needs to be taken seriously as the bedrock of distinctiveness.

In just a decade since Rachel Perkins and Darren Dale directed and produced First Australians there has been a flowering of stories on screen that for the first time put Indigenous characters centre stage. This has been repeated in writing and art, with First Nations writers winning major prizes and opening writers’ festivals, and artists representing the nation in international art shows like the Venice Biennale and documenta.

Cultures may survive without attention, but to flourish they need to be tended and nurtured, as the revival of Indigenous languages shows. To thrive, cultures need the space to evolve and develop, to add new layers while acknowledging the past. Australian leaders have refused to engage with this core challenge of nation-building for years, hiding behind bullying culture wars that foster cynicism rather than inclusion. The idea of Australia has been a work in progress for a long time. At pivotal moments in the nineteenth and twentieth centuries, it took big steps forward, redefining its meaning through stories and art as well as social and political movements. If Australia is to be based on something that rings true this century, it must continue to be a work in progress.

TELLING STORIES IS one of the best ways to do that – stories about people and place, about belonging and being an outsider, of changing and staying the same, of interrogating history and finding those who were once left out.

That is what Griffith Review is doing with this collection, which has stretched the idea of the novella into non-fiction. This edition includes wonderful imagined stories, but also some that have not stepped so far from the record. We decided to do this because some of the stories that need to be told, if we are to eliminate terra nullius of the mind, are so embedded in history and personal experience that they do not need the strategy of fiction. They are the story of the terrifying journey through remote Tasmania by George Robinson, Wooredy and Truganini; a consideration of the complexity of Henry Lawson’s personality and style, which was much more effeminate than the iconic story of a bush writer previously allowed; and the tale of a remarkable woman surviving by her wits (and a bit of magic) in a new land. By layering these stories, we hope to help build a more nuanced and insightful perspective on what it means to be Australian today.