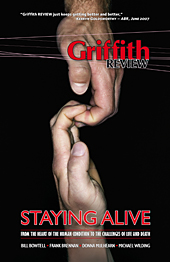 An idea whose time has come

TURNING SEVENTEEN IS important. It is an age when young people are beginning to experiment with being grown-ups – learning to drive, imagining life after school, reaching beyond the family, starting to work, falling in love, having sex and experimenting with youthful recklessness.

A lot is packed into those first seventeen years, and for most young people in Australia today, these early years will set them up for life – with the social, economic, educational and moral framework that will equip them to follow their dreams and create their own future. As any parent knows, seventeen years is a long time – dotted with milestones, tears and joy.

Now imagine seventeen years at the other end of life when it means dying at fifty-nine instead of seventy-six, or sixty-five not eighty-two. Seventeen years that signal the difference between middle and old age, years most Australians plan to enjoy with less pressure and fewer responsibilities – the bonus years that reward a life of hard work, lived well.

We have known this for years. The life expectancy of Indigenous Australians has been scandalously lower than that of the majority of the community for decades. It is tempting to say that the number of reports, committees of inquiry, plans and policies that have been developed is countless. But that is not true. They can be counted, as can the thousands of pages and millions of words that have been deployed. All identify a similar range of complex problems – health, education, housing, grog, welfare, abuse, porn – all laden with recommendations for urgent action by committed, often heartbroken people who wanted to see something done and despaired when their conscientious work became just another book on a shelf crowded with similar tomes.

For an indication of the research, the problems identified, recommendations made, promises half-heartedly given, for a litany of what has been said before, turn to the references in the two reports which galvanised political attention at the beginning of the winter of 2007. The report of the Northern Territory Board of Inquiry, Little Children are Sacred, includes twelve two-column pages of references; the Cape York Institute's From Hand Out to Hand Up includes a ten-page closely typed bibliography. There are records of community consultations in numerous appendices; both are substantial, rigorous and passionately argued.

The Northern Territory report challenges the historic inertia: "Some of our readers might say, We know all that, what's the use of another report. We would say, Yes, but what has been done? We know the problems, we know how to fix them and the likely monetary cost ... We have an enormous amount of knowledge in this country ... The money is available ... What has been lacking is the political will.

"Are there simple fixes? Of course not. Our conservative estimate is that it will take at least fifteen years (equivalent to an Aboriginal generation) to make some inroads into the crisis and then hopefully move on from there.

Perhaps this is too optimistic. The Council of Australian Governments has an as-yet un-commenced twenty year long plan to start, if agreed, in 2009. It has been talking about it, or something like it, since at least 2000."

JUST AS WE have become accustomed to detailed reports by conscientious committees, we have also become accustomed to the impassioned pleas of activists for "something to be done" – part of the background noise of public debate in this country for about seventeen years. In that seventeen years, thousands of Indigenous people have died – many of whom would still be alive if they had had access to the services other Australians take for granted, if they lived in safe communities where law and order prevailed – thousands of children have been abused or witnessed the abuse of others, countless other men, women and children have become addicted to grog and drugs, petrol and glue, and hundreds have taken their own lives. After the tragedy of the stolen generations, a new tragedy has ravaged the generations who have survived. Policy has failed again and people are dying too young as a result.

The Northern Territory report quoted the former Liberal Minister and National Native Tribunal member, Fred Chaney: "One of the things I think we should have learned by now is that you can't solve these things by centralised bureaucracy ... My own view now is that the lesson we've learned is that you need locally based action, local resourcing, local control to really make change ... Once you try to do it by remote control, through visiting ministers and visiting bureaucrats, fly in fly out – forget it."

In some remote and urban Aboriginal communities, some things have been done – those closest to the problems have been heard and devised workable local solutions that provide inspiration, measurable outcomes and ownership of the problems – and responsibility for solutions – back to the people most affected, with the support they need. But, like Sisyphus pushing the rock uphill, it is a thankless task that always threatens to collapse.

Success is also generally invisible – it does not make the headlines – as Bill Bowtell writes here in relation to Australia's successful HIV/AIDS prevention policies: "Success is an orphan while failure has a thousand fathers." In health policy, like Indigenous policy, there are plenty of incentives for caution and few penalties for failure and inaction, apart from the lives lost and damaged as a result – but those affected rarely get a public voice. There are also few political bonus points in doing anything – as Noel Pearson wrote in Griffith REVIEW: Unintended Consequences a few months ago, "Australia's democracy is telegenically allergic to blackfellas" who remain the lepers of the political process.

So the astonishment – when the Prime Minister announced on June 21, 2007 that something would be done – was palpable. Was it, as the self-empowerment movement used to say, an idea whose time had come or just another political ploy? Cynics suspected a political wedge that would play on the racism in key electorates and searched for base political motives in the months leading up to a federal election; weary activists were grateful that the plight of their people had made the political agenda, their enthusiasm tempered by a fear of another political swindle and an alarming lack of detail. At the end of June, as we went to press, it seemed that the key principle of both the Northern Territory and Cape York reports – that the local community had to own the solutions and be responsible for them – had been pushed to the side in an emotional rush to "do something": send soldiers and police and doctors into remote communities, test the children, ban grog. It will be months, maybe years, before the answer to this cryptic political puzzle will be known.

THERE ARE STRIKING parallels between this apparently intractable situation and the global HIV/AIDS pandemic. Australia has a remarkable, if little celebrated, history of innovative policy-making. The success in preventing the spread of HIV in the 1980s is one of them. At the time, the pleas that "something must be done" reverberated around Canberra until a bold, and politically risky, solution was found. It depended on working with those closest to the problem (an apparently politically unattractive troika of gay men, illicit drug users and sex workers), devoting resources to prevention as well as care and treatment, challenging the prevailing populist orthodoxy that HIV was the wages of sin and communicating with the whole community. It worked.

In many other countries, including America and much of Africa, superstition and ideology trumped science in dealing with HIV/AIDS. The consequences were devastating. Within two decades, a virus that should have been contained became a global pandemic. Twenty million people have died from AIDS as a result, and each year another four million are infected and many of them will die, each leaving a snail trail of loved ones to grieve. The cost of treatment in the next few years is estimated to exceed $US55 billion. As the second phase of the global HIV/AIDS pandemic looms in the Asia Pacific, it is time to consider the goal that Bill Bowtell advances here – the eradication of HIV by the end of this century – using behavioural and medical therapy. This too may be an idea whose time has come, and for the millions who will otherwise be consigned to a painful death we must hope that the right incentives can be found to make it workable.

Just as it is children under seventeen who are most at risk in dysfunctional, under-resourced Indigenous communities, elsewhere seventeen-year-olds are most likely to contract HIV, unless they are given timely, appropriate information about sex and drugs, and the ability to act on it. Race and poverty do not make people deaf to messages of prevention, survival and staying alive.

The paradox of prevention renders success invisible and makes funding prevention precarious. Getting the policies and the messages right – implementing prevention of HIV, ensuring safety and respect for law and humanity in Indigenous communities – may give the most vulnerable a chance of the galloping longevity the rest of us expect. Courageous, pragmatic and imaginative solutions owned by those most affected – even if they are considered political lepers – must be implemented.

Seventeen is an important number to keep in mind.