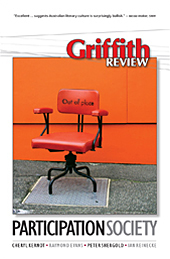 IT WAS ALWAYS a thrill to find an email from the prospective president of the free world jumping out from the overnight clutter in Thunderbird.

‘It's in your hands, Julianne' was the subject line of a tight four-line email Barack Obama sent me at 3.52 am on October 30, 2008. ‘The next six days are going to be the toughest we've seen,' he cautioned, before entreating ‘this campaign is in your hands' and thanking me ‘for everything you are doing'.

‘No wonder he looks tired,' I joked to my family over breakfast, ‘he was up all night sending emails ...'

In the final weeks of the 2008 US election campaign the notion of the global village took on a new meaning. Not only were all eyes trained on the consensus-busting contest in the world's increasingly troubled super-power, but countless millions who could not vote knew they had a stake in the outcome and, remarkably,
felt involved.

Before 2008 earned a place in history for the election of Barack Obama, it had been tagged the ‘year of social networking'.  That Obama used social networking to raise more money, involve more people and create a more intimate sense of engagement, was emblematic.

Between one US presidential election campaign and the next, the number of people using Facebook, to network with friends skyrocketed from one to a 120 million – and continues to grow.

The lessons of community organising married with the tools of the internet and the power of a compelling narrative, created a new campaign paradigm that will be dissected and analysed for years.  The era of mass media politics ended more abruptly, and with less fanfare, than it had begun. Goliath was wounded, if not slain, by what Glenn Reynolds presciently called An Army of Davids (Nelson, 2006) – who expected to be addressed by name, have an opportunity to propose and discuss policy, answer back, give a few dollars and be thanked.

It was a fairly simple four-page survey, picking at the usual questions – how people got involved, what motivated them, what training worked, how they connected with others, the big future issues.

But at the bottom of the third page was the killer question, the one that symbolised the new paradigm, and took your breath away. It simply asked, ‘Are you interested in running for elected office yourself?'

Nearly six hundred thousand people responded, without doubt the biggest survey of politically active people ever conducted. Remarkably, in a country that had come to believe it was apathetic, that knew in its bones that real power belonged to the goliaths of big business, big media, big politics – more than fifty thousand people said that yes, they would stand for election.

There was something reassuringly old fashioned and optimistic about this response – the new virtual world staked its claim in the old representative world.

IT IS ONE thing to click 'yes' to an online survey, another to do something about it, to throw yourself into the much more troublesome and demanding world of organising, lobbying, courting rejection and failure, because you think you can make a difference, that there is another way that things could be done. It takes imagination and optimistic confidence to conjure innovative ways of thinking and responding.

The era of mass politics depended on, and cultivated, passivity. Taking action was the exception. Policy was a matter for experts and vested interests. Layer on layer of official and informal monitoring organisations may have accreted in one country after another, but still ordinary folk expected to only play their part by getting on with their lives as conscientious consumers who voted now and then.

The promise and reward was increasing material well-being for most.

The new era of participatory politics recognises that money is not enough, it values a conversation where people answer back and seek social value. The screen-based world is just the beginning, energy is now directed at getting people from online surveys to local functions where they can build new networks, get to know others who are asking the same questions and thinking about ways of doing things with social as well as material benefits. Mark Zuckerberg, Facebook's co-founder and chief executive, declared his company's mission, ‘is to make the world more open and transparent by giving people the power to share information.'

It is ironic that Big Brother's watchful screen, which George Orwell imprinted in our collective imagination as a system of control, should now promise collaboration, transparency and participation. It is doubly ironic that this paradigm shift has coincided with the world's most spectacular loss of personal wealth.

IN THE MONTHS that followed Obama's election, it was clear that the old consensus was crumbling faster than anyone expected.

It is one thing to talk about participatory politics in a campaign, quite another to turn it into action within the cumbersome checks and balances of complex societies. In Australia it did not take long for the liberating potential of the 2020 Summit to hit the brick wall of interdepartmental committees, policy hierarchies, vested interests and budgetary restraint. Its potential, which could have been the first significant international experiment in talkback politics for an engaged citizenry, languished under the demanding routines of business as usual.

It remains to be seen whether Obama's presidency will change the rulebook of ‘democratic system management' either.  Managing an empowered and engaged citizenry is profoundly different – even when the technology works.

Facebook, which likes to describe itself as the world's sixth biggest country, confronted this challenge when it sought to change its terms of use. The suggestion that it might own the information posted by members caused a spectacular backlash and provoked an extraordinary experiment – the creation of a corporate bill of rights and responsibilities, and the promise that members could vote on contentious policy changes.

Openness, participation and collaboration are the new tools ready to be road-tested in business and government – at a moment when the evil twins of economic and environmental catastrophe conspire to produce the world's greatest crisis for decades.

The British government had already begun to experiment with this approach.  Its Information Commissioner oversees a regime that puts the expectation of open access to government information at its core – a far cry from the old British model ready to defend official secrecy to the death. The Australian government has drafted legislation aimed at a similar transformation, and the Right to Know coalition of media companies is keen to flex its muscle.

Implementing such an agenda both demands and will produce profound culture change – information that was once the protected tool of insiders and vested interests becomes ‘a national asset' available to all.

In this environment, those that enable citizens and consumers to be actively involved in finding and implementing solutions – involving public, private and not-for-profit sectors – are most likely to flourish. The success of the Obama campaign in collecting small donations from countless individuals has inspired other ‘causes' to grow their own support online – the logic of the collaborative networked society is transformative.

NOW AS MUCH as much as ever, where America goes, we follow. The principles of openness, collaboration and participation have not yet been grasped with gusto in official quarters in Australia, but on the ground they are already changing lives and the way things are done.

The combination of the global financial crisis, the enabling power of technology and the potential of social enterprises (in a closely intertwined world where the winners and losers are more visible) may force thinking about a new consensus. Australia will not be immune from this and it may be to our great benefit, unleashing productive and imaginative capacity that has lain dormant for years of good times to create a new settlement. If we dare.

In one of his victory addresses President Obama described his country's best export as the ‘idea' of America – its democratic principles, its openness, its entrepreneurial spirit. This idea had become tarnished over recent decades, but the election outcome was akin to pouring a giant tin of Brasso over the grime and finding something still shiny underneath.

Almost a week after Obama's speech at Grant Park in Chicago, David Carr noted in The New York Times: ‘The founders of America wanted a government that reflected its citizens, but would be at remove from the baser impulses of the mob. The mob, flush with victory, is at hand, but instead of pitchforks and lanterns, they have broadband and YouTube. Like every other presidency, the Obama administration will have its battles with the media, but that may seem like patty-cake if it runs afoul of the self-publishing, self-organising democracy it helped create ... That's the thing about pipes today: they run both ways.'

Andrew Rasiej, the founder of Personal Democracy Forum, told Carr: ‘Any politician who fails to recognise that we are in a post-party era with a new political ecology in which connecting like minds and forming a movement is so much easier will not be around long.  Yes, we have met Big Brother, the one who is always watching. And Big Brother is us.'

That is the profound challenge and opportunity of a participation society.