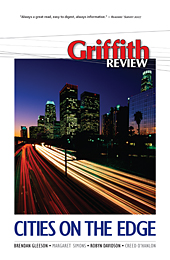 The year cities ate the world

IN 1853 GEORGES-Eugène Haussmann was given what a lesser man would have considered an impossible task – the transformation of Paris. Two years after his coup d'état Emperor Louis-Napoléon Bonaparte set Baron Haussmann a series of objectives: make it healthier, clear the slums, free up traffic, make the suburbs accessible, build new stations, provide water and sewerage, limit civil disturbance – in short, create a monumental city the world would envy.

At the time Paris was home to a million people, about half the number who lived in London where construction of the infrastructure essential to modernisation and sustainable population growth was more advanced. Paris was a vile, overcrowded, polluted, disease-ridden place with high unemployment, insufficient water, no sewerage and virtually no parks.

Fast forward 155 years and there are hundreds of cities that could be described like this but twenty-first-century emperors prepared to give ambitious, egotistical planning czars their head are hard to come by.

The master planner of Paris managed to create one of the most beautiful cities in the world, until the limits of his debt-financed model caught up with him. ‘City builders have always had to be pathological optimists, if not out-and-out fantasists,' architecture critic Deyan Sudjic recently observed.

A century before John Maynard Keynes proposed a way to ‘save capitalism from itself', as the frieze on the wall at the top of the New York World Trade Centre once declared, Haussmann devised a way to save the city from itself. His ambitious demolition and rebuilding programs generated political opposition but produced jobs and a more sanitary city.  Within a decade one in five people were employed on his projects, people flocked to Paris and they too found work. There were still slums behind the beautiful five-storey limestone façades of the apartment buildings that lined the boulevards but, on balance, life was immeasurably better. The urban age began to gather momentum.

In the process Haussmann invented an approach to city planning, regulation, suburban development and financial management that by an almost Darwinian process of evolution has since been hard-wired into generations of planners, politicians and property developers. His can-do style, grand successes and niggling failings provided the template for many successful cities: clear regulation and building codes, adequate ring-roads, efficient infrastructure and transport, access to debt finance, the possibility of speculative profits, space for parks and residential suburbs, a sprinkling of monuments and the motivational spark of global competition to get it done quickly.

The challenges facing political leaders and urban planners today are at least as great as those Napoleon and Haussmann confronted, but few of the solutions show much sign of creating elegant useable spaces that are likely to be treasured a couple of centuries hence.

At least regulation is now an accepted fact of urban life, as the great urbanist Sir Peter Hall, who is optimistic about the future of cities, wrote in his magisterial 1998 tome, Cities in Civilization (Phoenix): ‘A very important part of [urban] living, and the creativity that comes out of it, has consisted of finding solutions to the city's problems of order and organisation ... much of it is mundane, even invisible: aqueducts and sewers and subways, asylums and workhouses and gaols, laws and regulation.'

WHILE HAUSSMANN FOCUSED on the centre of the city, the people who once lived in the areas he razed were pushed to its edges, to what was described as ‘Parisian Siberia' – at least until annexation expanded the city and his sphere of influence by creating new residential arrondissements.

The outer limits of Paris are now much more distant and the stressed neighbourhoods marked by high-rise modernist buildings where recent waves of immigrants have settled lack the uniform charm of Haussmann's city of light – or the parks, or the jobs.

The shambolic edges of cities are now arguably as important to the future of humanity as the glossy centres. Even in the developing world, city centres have become consumption precincts where cultural icons stand next to corporate offices, immaculate global designer outlets and lavish locally branded department stores while on the footpaths street hawkers who travel in from the city's edges sell food, flowers and cheap sunglasses, umbrellas, handbags and perfumes that have tumbled off the backs of trucks.

At the beginning of the twentieth century 90 per cent of the globe's much smaller population lived in the country; only sixteen cities housed more than a million people. This year, for the first time in history, most people – in the developed and the developing world – will live in cities. And by 2050 nearly seven billion people are likely to do so. Homo urbanis has prevailed.

THE GRAVITATIONAL PULL of the city has become irresistibly an end in itself, decoupled from the needs of industry. Every day on every continent countless people are on the move: for nearly two decades a thousand people a week have been loading removal vans and heading over the Queensland border but that number is moving every day into cities in China and Africa and India. Whole communities move and create instant informal suburbs on the edges of the burgeoning global cities.

It is easy to underestimate the scale of this transformation and what it might mean for the millions of people clustered on the edges of the dozen mega-cities with more than eighteen million inhabitants – larger than many countries – and on the fringes of countless smaller cities where most of the growth occurs.

It is tempting to think that a visionary twenty-first-century emperor with access to money, bulldozers and cranes – Dubai's Sheik Mohammed bin Rashid al-Maktoum or Singapore's Lee Kuan Yew for instance – could transform chaotic cities in Asia and Africa, where the number of people living in cities is expected to double to 3.4 billion in the next two decades. Such authoritarian models are, however, unlikely to win widespread acceptance. The challenge of the urban age remains.

As Hall has written, ‘cities have always remade themselves in the image of political philosophies'. Today the United Nation's favoured policy settings advocate respecting the rights of the poor, people-centred development that protects the ecology within the extended ‘urban footprint' and international intervention to improve future urban expansion. The UN Population Fund 2007 report pleaded for a sense of urgency: ‘The approaching urban millennium could make poverty, inequality and environmental degradation more manageable, or it could make them exponentially worse.'

THE TENSION BETWEEN the bucolic countryside and the evil city is as old as human civilisation and has often found expression in literature and art. In 1926 Fritz Lang created enduring images of urban despair – which have inspired generations of filmmakers – in his great film Metropolis that depicts the soulless life of a city a hundred years hence with mesmerising beauty. Not long afterwards American polemicist Lewis Mumford extravagantly decried the ‘shapeless giantism' of the cities that were fast becoming the hub of the industrial economy. Mumford was not alone in believing that these cities would eventually strangle themselves on their own urban entrails – Megalopolis en route to Necropolis.

This has not happened, although it is widely acknowledged that the greatest cities are not earthly utopias but places of stress and actual misery. They are also the places that create civilisation, foster creativity, tolerate diversity and, paradoxically perhaps, also place a high value on the natural environment. The great environmental campaigners found voice and momentum in cities, first protecting neighbours and special places close by then extending their reach to more remote, wild and endangered places.

Climate change is, however, the new unknown ingredient in this cocktail. Brendan Gleeson argues global warming is the quickening of time and nature produced by urbanisation. With population increases and increasingly costly energy, there is a need for consolidated urban policy that cuts through old ways of seeing and addresses the new and urgent problems with a positive and imaginative response that recognises that the age of homo urbanis has arrived and fosters sustainable solutions in the way Haussmann was able to do in Paris in another era.

Chances are you are one of the millions who have spent most of your life in a city. But your grandparents did not. On a good day this seems like a wonderful evolution because as Hall notes, ‘throughout history cities have been places that ignite the sacred flame of human intelligence and imagination' but on a bad day the promise of a quiet life in a little village in the countryside or by the sea, unspoilt by too many people, too much traffic, too much activity, too much stress, is tantalising.

The real and present danger of climate change may provide the impetus that is needed to find solutions that put people at the centre of the cities most of us live in and also keep nature in balance. In the urban age humanity will need to devise quite different solutions to survive and flourish than our forebears adopted in the ice ages, or the ambitious planners of the industrial age.

So the next time – tomorrow probably – you are stuck in traffic that is moving impossibly slowly, don't curse the traffic lights, the other drivers, the transport engineers or even the politicians who sprint like mice on a spinning wheel but never catch their tails. Instead, turn up the music and reflect on your little role as a participant in one of the great social transformations of all time and the challenging relevance of the old German proverb: Stadtluft macht frei – city air makes you free.