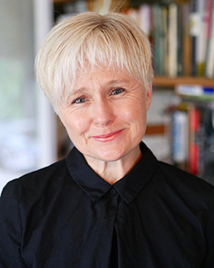 Ashley Hay, Griffith Review’s editor between 2018 and 2022, is a prize-winning author who has published three novels and four books of narrative non-fiction, an essayist, journalist and facilitator, and former literary editor of The Bulletin.

Her work has won several awards, including the 2013 Colin Roderick Prize and the People’s Choice Award in the 2014 NSW Premier’s Prize. She has also been longlisted for the Miles Franklin and the International IMPAC Dublin Literary Award, and shortlisted for prizes including the Commonwealth Writers’ Prize and the Kibble.

In 2014, she edited the anthology Best Australian Science Writing. In 2021, she was invited to provide literary interpretation for Eucalyptusdom, a landmark MAAS exhibition at the Sydney Powerhouse. A new edition of Gum: The Story of Eucalypts and Their Champions was also published that year.

‘A poem is a unicycle’
Edition 71: Remaking the Balance

Samples of gifts and giving
Edition 70: Generosities of Spirit –
The Novella Project VIII

This south and that north
Edition 69: The European Exchange

The time of our lives
Edition 68: Getting On

Foresight, hindsight and the present day
Edition 67: Matters of Trust

In the small hours
Edition 66: The Light Ascending –
The Novella Project VII

Seeing through the digital haze
Edition 64: The New Disruptors

What happens next
Edition 52: Imagining the Future

Adaptation
Edition 45: The Way We Work

Where the wild things are
Edition 21: Hidden Queensland

Beyond the frontier
Edition 76: Acts of Reckoning