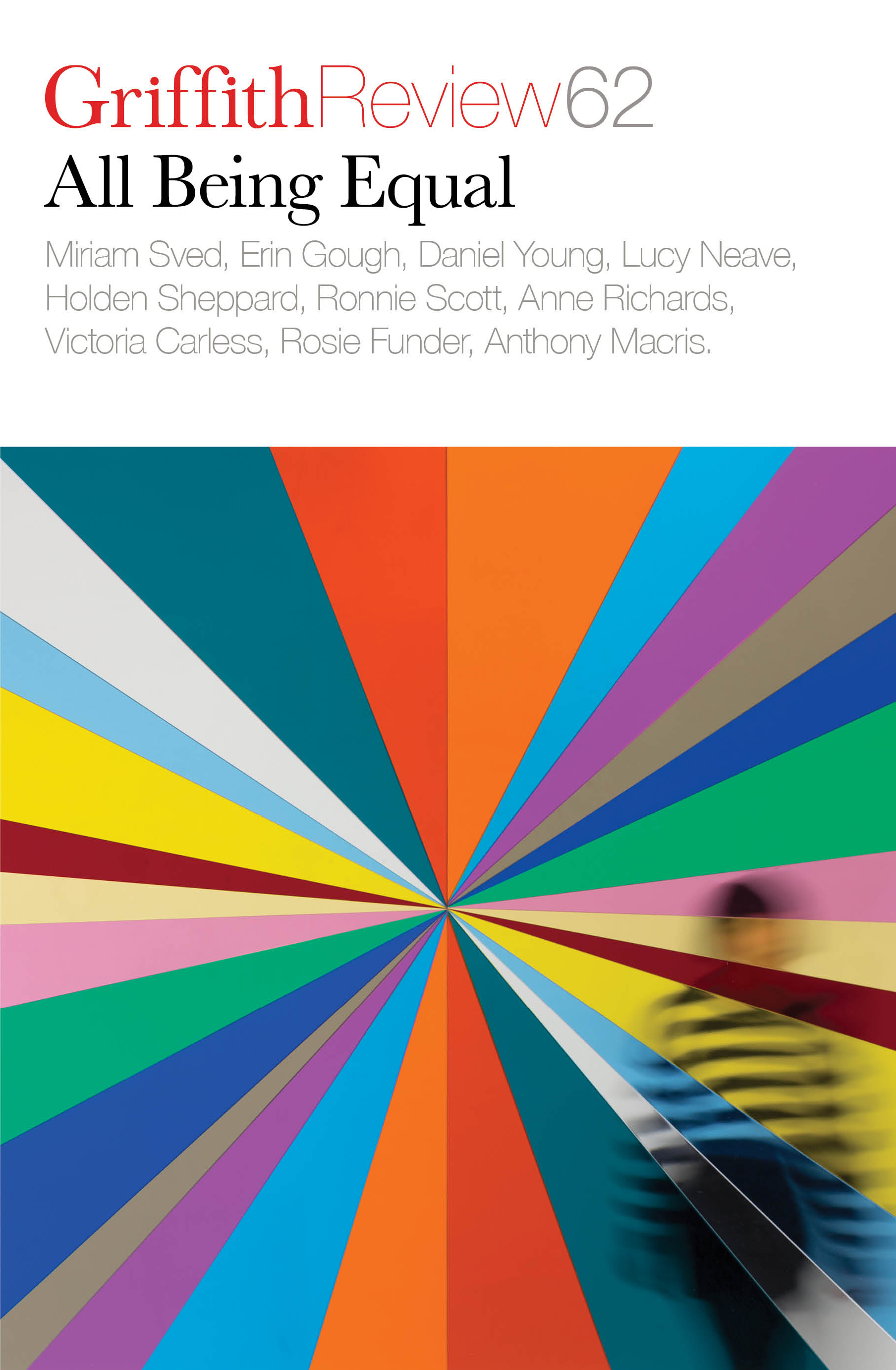 The narrative spectrum of freedom
by Ashley Hay

IN THE WINTER of 2018, the National Gallery of Victoria’s ground floor was given over to the MoMA at NGV exhibition, arranged across two suites of galleries in its iconic St Kilda Road site. The first run of rooms held a cornucopia of famous images from Matisse and Van Gogh to Warhol, and two installations of Tomohiro Nishikado’s pioneering Space Invaders game, complete with consoles. Beyond which a small dogleg of space displayed two wall paintings – a giant recycling symbol, and a giant @ – and, around the corner, the ‘Rainbow Flag’, sewn by its original designer, US artist and activist Gilbert Baker. These three pieces were drawn from MoMA’s design collection, a broader assemblage of ‘universal symbols’ that also includes the ampersand and the creative commons logo.

Baker created the first striped rainbow flag using huge swathes of purpose-dyed organic cotton fabric for the Gay Freedom Day Parade held in San Francisco on 25 June 1978. ‘I thought that we needed that kind of symbol,’ he said many years later, ‘that we needed as a people something that everyone instantly understands.’ His team of some thirty volunteers ran late-night guerilla raids on public laundromats to ‘fix’ the strips of brightly dyed fabric in their washing machines, loading bleach into the machines when they were finished so that subsequent customers wouldn’t leave with coloured smalls.

Originally made up of eight bands of colour, the flag now boasts six: red for life; orange for healing; yellow for sunlight; green for nature; blue for serenity; violet for spirit. The hot-pink stripe (originally signifying sex) was dropped when the flag went into commercial production because fabric that colour was both rare and expensive; the turquoise stripe (signifying art) was dropped to give the flag an even number of stripes that could be split in two for the 1979 Gay Freedom Day Parade. ‘I realised I would have to make some compromises in order for this to really function as a symbol,’ Baker explained.

Baker refused to apply for a trademark for the design, telling friends he saw it as his ‘gift to the world’. Four decades later it is universally recognised not only as the standard of the LGBTQI community, but also, as Baker’s obituary in The New York Times noted in 2017, as ‘a universal symbol of peace, inclusion and love’.

In one of the satisfying loops that makes for a good story, Baker gifted this flag to MoMA in 2015 and it was unfurled there for the first time on June 25 that year – the thirty-eighth anniversary of its first appearance and the day that the United States’ Supreme Court legalised same-sex marriage in that country. On that day, more than twenty-six million Facebook users worldwide altered their profile pictures to include Baker’s rainbow flag.

In the NGV in Melbourne, the flag was almost tucked away and its positioning required viewers to pause and stand with it; it transformed its corner of the gallery into a meditative space. Hung high on the wall, in the still and quiet of the gallery’s air, it was a rainbow at rest, its silken drapes folding those six bands of different colours into a kind of embrace.

To stand in its presence in the Australian winter of 2018 was to feel an extra sense of its power, and an extra sense of all that might be bound in it. By 1 June 2018, six months after the legalisation of same-sex marriage here, almost 2,500 of these unions had been registered across the country’s states and territories, according to figures on the pop-culture website Junkee. This flag nodded to those stories also.

This year’s annual novella edition of Griffith Review acknowledges, in part, these symbols and the narratives that hold them. Its theme – ‘All Being Equal’ – was conceived in late 2017, partly as a response to the resounding ‘Yes’ vote recorded in that year’s postal survey. Its call for entries pondered ‘appetites for equality’ and ‘the primacy of love’, and many of its submissions spoke directly to the idea of marriage equality.

This year’s winners of the novella competition are Erin Gough, Lucy Neave, Holden Sheppard, Miriam Sved and Daniel Young, and they were selected from an outstanding field of more than sixty entries by a judging panel comprised of Dennis Altman, Benjamin Law, Melissa Lucashenko and Aviva Tuffield, as well as the staff of Griffith Review. They hold elements of celebration and lamentation, of moments caught and moments missed. The intense intimacy of each is a vivid reminder of the many ways in which individuals and their stories often disappeared beneath the broad political sweep of the campaigning around the postal vote. These are windows into individual lives, with all their complexities and choices.

THIS ISSUE OF Griffith Review also includes three pieces written under the auspices of last year’s Queensland Writing Fellowships, with memoirs by Rosie Funder and Anne Richards, and fiction by Victoria Carless. In different ways, they open out ideas of equality in family relationships and their intersections with wider political and philosophical worlds. They occupy three distinct landscapes: the closed space of a yogic community in south-eastern Queensland, the explosions of youth and protest in Brisbane around the Vietnam War, and the dangerous reality of desertion on the Western Front in World War I. Two of these writers, Funder and Richards, are emerging writers: this is the first time either has begun to explore the telling of their stories, and these add to Griffith Review’s long history of opening space for new voices. It includes, too, Ronnie Scott’s lyrical meditation on the changing nature of queer public spaces and the lives that change within them. It’s a beautiful adjunct to this year’s novella themes.

What all these stories have in common are determined kinds of love. And it is a ferocious determination to love that sits at the centre of Anthony Macris’ triptych ‘Three poems about my son, who has autism’. It’s a suite that speaks about the power and creativity of each individual life. And it’s another story about people, and purpose, and love.

THERE’S A PHOTOGRAPH of Gilbert Baker taken back in 1994. The photographer is perched high up above Baker as he leans forward over the tiny glowing light of a sewing machine. He’s surrounded by yards and yards of rich red fabric – perhaps it’s the red stripe for the mile-long flag he made for the twenty-fifth anniversary of the Stonewall riots that year. The image captures him as a shimmer of presence and movement: this instant of the next incarnation of his rainbow as it comes into being.

Walking the other morning, I passed a house not far from mine and saw, hanging from its gutters, a vast rainbow flag that reached all the way to the ground. I don’t know who lives there, or why the flag was flying. But it was impossible not to smile to see it. It was exuberant and enormous, and it shone. It was a moment in somebody else’s story, and its brilliance made it everyone’s to see.

Coming into this collection of writing, coming into the role of editor of Griffith Review, I have an image of each piece in each edition shining like a dot-point in a shifting constellation. Each works among the others to make a slightly different whole. Those conversations between words reflect the conversations these words themselves might spark, which might spark another set of stories in the world. And these processes of making and creating are as important as the stories that they tell.