Foresight, hindsight and the present day 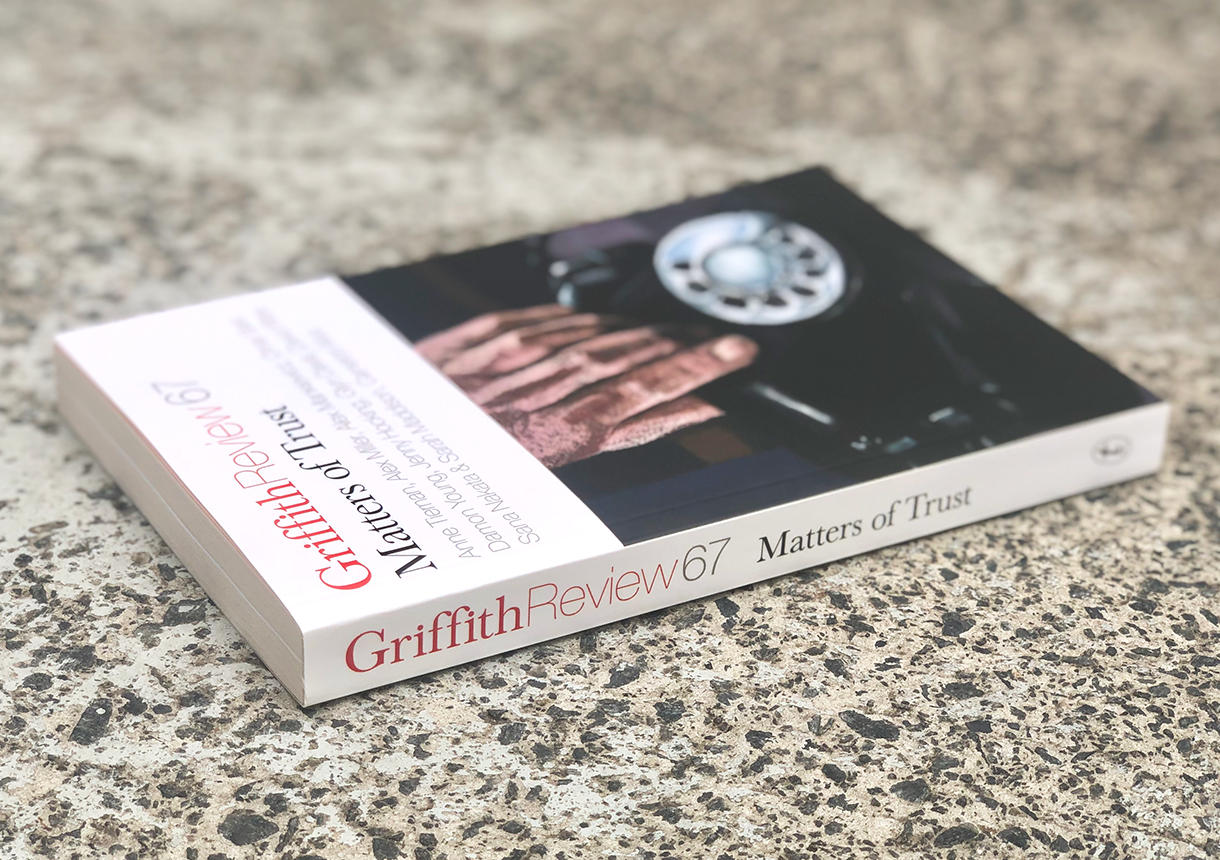 IN 2013, US-based Chinese visual artist Cai Guo-Qiang created the vast artwork Heritage for GOMA in Brisbane. This spectacular diorama features a waterhole more than a thousand square metres in size, around which are set ninety-nine replicas of different animals from all over the world, each posed in the act of drinking. Polar bears, kangaroos, zebras, pandas, ibex and a single baby elephant stand together among so many species that ordinarily would never be found in the same landscape.

This mighty piece suggests utopias on the one hand (the coming together of lion and lamb) and scarcity or precarity on the other (as if these animals had been drawn to drink from one remaining puddle of water). It lays bare the harsh potential of the division and confrontation that would occur if these animals raised their heads and saw themselves and one another as combinations of predator and prey instead of as one harmonious circle of tolerance; of trust.

WHAT WE TRUST, who we trust and how we trust are currently matters of deep consideration and passionate debate in Australia and much of the world. Our World in Data, an open-access collaboration between researchers at the University of Oxford and the not-for-profit Global Change Data Lab, has produced table after table charting perceptions of trust in different nations and between different participants, from trust in interpersonal relationships to trust in the largest institutions. These compare the difference between interpersonal trust in several Scandinavian countries (running at around 60 per cent) with several South American ones (running at around 10 per cent).[i] They point to a continuing slide in the trust Americans have towards their federal government, as measured by the Pew Centre, from a peak of 77 per cent in 1964 (President Johnson) to 17 per cent in 2019 (President Trump). They show a correlation between high levels of interpersonal confidence and civic engagement on the one hand, and ‘peaceful collective decision-making’ on the other.

Australia surveys its own ideas around trust through instruments from the Edelman Trust Barometer to the Australian Electoral Survey, and the results have charted a steady demise. According to research undertaken for the Democracy 2025 project, popular levels of trust in politicians and democracy were running at ‘an all-time low’ ahead of last year’s federal election.[ii] In this research, political trust was understood to mean ‘keeping promises and agreements’; less than a third of those surveyed had confidence or belief in their federal government.

The thinking around Matters of Trust began before that election, around the arrival of this new decade and this new year. It’s a year with a particularly evocative name – 2020 – that has implications of perfect vision (of hindsight, or otherwise) and has also worked as a shorthand phrase for some kind of far-off future. In Australian circles, that date also recalls the Rudd government’s Australia 2020 Summit, a gathering of 1,002 delegates held with bipartisan support in April 2008 to ‘help shape a long-term strategy for the nation’s future’.

And now, here we are in its time and space, in a landscape also demarcated by major reports – interim or final – from three mighty Royal Commissions of Inquiry: into the banking and finance industries; into the institutional abuse of children; and into the provision of aged care. All have exposed vast betrayals of trust, extraordinary examples of corruption and the urgent need for broad reform.

This edition of Griffith Review sought stories of change and reform. It sought optimism, epiphany and a sense of moving forward. It sought to report from the public service, various levels of government, hospitals and churches, from our families, our psyches and ourselves, to record what our future looks like now we have reached its shores.

What has come into focus are complexities and collaterals, suggestions and alternatives. There are careful dissections of the nature of trust – where it should and shouldn’t be expected or required, and the multiplicities of power and risk such complex relationships involve. These are more than semantic exercises: they form a forensic examination of one of the most critical forms of ‘social glue’ – the means by which, in increasingly divided spaces, we can perhaps attempt to connect again.

The working definitions of trust on show here come through various perspectives and prisms – from policy and diplomacy to the fallout of those explosive Royal Commissions to the dynamics of the most intimate personal relationships. They explore different voting systems; the global shape of multinational power; the potential collateral damage of institutional betrayals; the landscapes of environmental collapse and archival secrecy; the language of bullying and of abuse; the potential for revolutionary reform from within systems that appear to have lumbering structures that impede change. And in unpacking these ideas, they also investigate the corollaries of trust: risk and betrayal on the one hand, and opportunities for co-operation, collaboration and reform on the other.

Trust requires us to sit at a waterhole with creatures we may eat and that may eat us – and it requires everyone to guarantee that neither of these eventualities will occur.

We thank ANZSOG for their support as our partner for this issue and look forward to a program of events under the auspices of this partnership. We’re also excited by our exclusive new online work for this edition, from contributors including Anita Heiss, Nicholas Gruen, Terry Flew and Nance Haxton.

IN 2017, THE social scientist Toshio Yamagishi spoke with Hugo Mercier, a cognitive scientist and co-author of The Enigma of Reason (Harvard University Press, 2017), about what Yamagishi called ‘informational asymmetry’ between trusting and not trusting: it’s only by trusting someone that you learn whether you can trust them or not. ‘This informational asymmetry means that we learn more by trusting than by not trusting,’ Mercier wrote for Aeon. What makes this more complex, he notes, is that while the costs of mistaken trust are always obvious, its benefits – like the costs of mistaken mistrust – are largely hidden.[iii] ‘We should consider these hidden costs and benefits,’ he says, and ‘think of what we learn by trusting, the people whom we can befriend, the knowledge that we can gain.’

For five years, Cai Guo-Qiang’s animals were packed away in storage, their waterhole drained and dismantled. But earlier this summer, the waterhole was remade, the animals put back on display again. They look down, escaping all those definitions of who should or could trust whom. They look down, and perhaps they see their own reflections in the water, in the same way we might see ourselves revealed if we looked down also.

To stand among them is to feel a sense of reverence, to be inside a necessary story of co-existence, of exchange and of hope.

[iii] Mercier, H. (2019). The smart move: we learn more by trusting than by not trusting. [online] Aeon. Available at: https://aeon.co/ideas/the-smart-move-we-learn-more-by-trusting-than-by-not-trusting

IN THE DAYS after Labor’s unexpected defeat at the May 2019 federal election, a social media storm raged. ‘What the hell is wrong with Queensland?’ was a common starting point ahead of calls for the state to be excised from the rest of Australia. In response, two Griffith University colleagues and I wrote an article... Read more

Towards a reconception of power

IT WOULD BE disconcerting to wake up one day and discover that everything we thought was real in the world we live in was simply a fantasy constructed out of some flimsy, mismatched old metaphors. Though most of us can go through life without ever noticing, the truth is many of the things we experience... Read more