The fraught pursuit of justice
by Ashley Hay 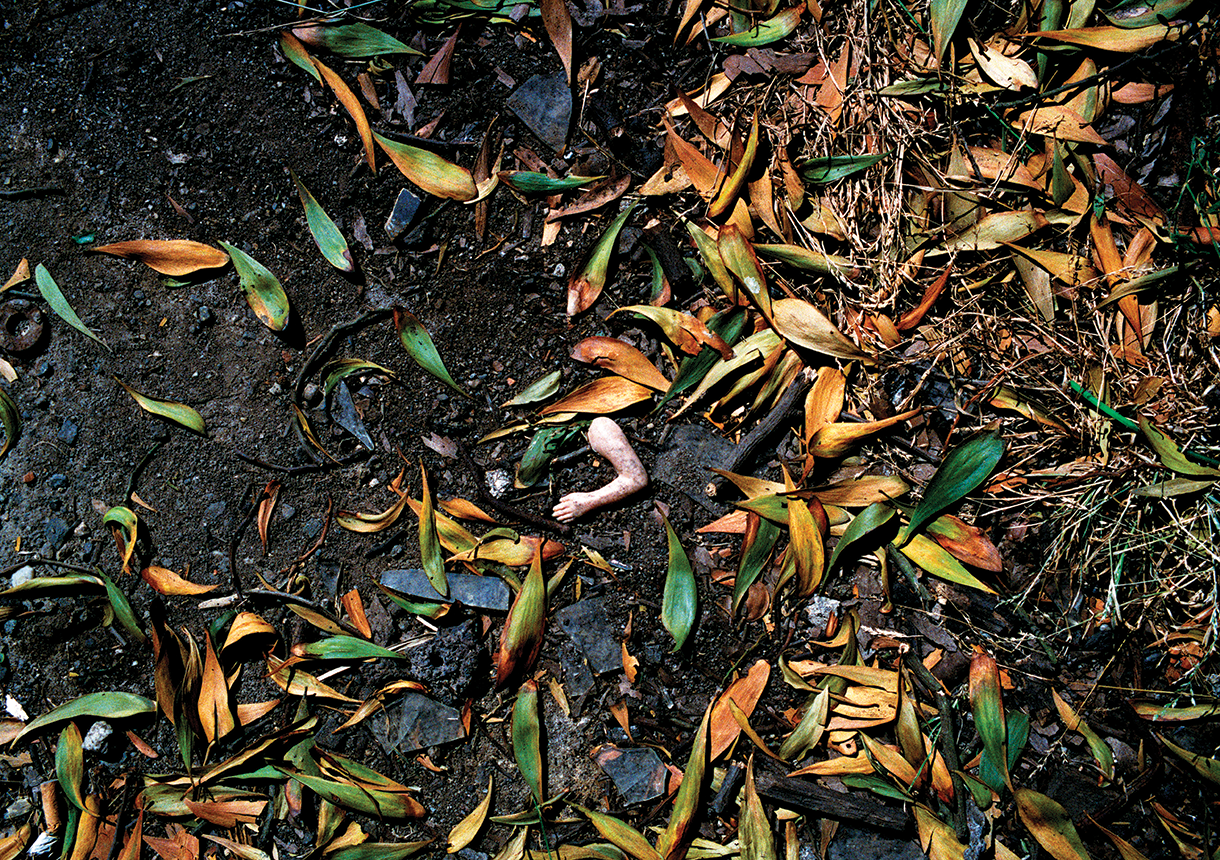 THE PERIMETER OF the New Gaol on Norfolk Island features imposing walls set with three archways, one high and two low. The setting sun throws long shadows onto vivid green grass and the light bleaches the view through the arches to a gentle haze. This is all that remains of the pentagonal panopticon built during the third phase of convict transportation (1825–1855) to this island situated some 1,500 kilometres off the east coast of Australia. And though the prison’s buildings are long gone, these arches were once a gateway into the architecture of Great Britain’s global penal system – the ‘ne plus ultra…of convict degradation’, as Robert Hughes put it in The Fatal Shore (Knopf, 1986). What is now an elegant, slightly surreal parkland – a landscape that is picture-book perfect – is also preternaturally silent: a remnant of the comprehensive system of colonial justice and punishment that first brought the authority and might of the British Empire to this part of the world.

The appropriation and settlement of Australia’s mainland, along with the establishment of outposts on Norfolk Island and Van Diemen’s Land, speak to a global trade of discipline and retribution that saw 166,000 convicts traverse the globe between 1788 and 1868, borne by more than 800 ships. The last convict transported to and incarcerated in Australia was released from Fremantle Prison in 1906. In July 2010, sites from Norfolk Island, the mainland and Tasmania were scooped into a new World Heritage listing that marked ‘the best surviving examples of large-scale convict transportation and the colonial expansion of European powers through the presence and labour of convicts’.

This was how modern Australia began.

MUCH HAS CHANGED in our ideas of justice and retribution: these are areas in which different eras very clearly try to do things in different ways. The infamous pillars of the convict system – flogging, solitary confinement, hard labour in leg-irons and the sought-after ticket of leave – have given way to approaches that include restorative justice, justice reinvestment and social-benefit bonds. Reduction of the global ‘justice gap’ is one of the seventeen Sustainable Development Goals set by the UN General Assembly for realisation by 2030. At the same time, the privatisation of incarceration services has seen a new global industry boom. Australia places a larger proportion of its prisoners in privately run facilities than any other country in the world – although, in a bid to reduce the number of assaults on staff, the management of two private correctional centres in Queensland reverted to state government control in March 2019.

The world may view the rights and wrongs of these evolutionary phases through prisms as disparate as kindness on the one hand and profit margins on the other. But whatever the changes in play, stories of crimes, punishments and the many narratives of justice continue to feed the popular imagination. Huge turnouts at public executions fed into penny-dreadful tales in the nineteenth century, and Hollywood’s later embrace of noir in the twentieth. Our more recent hunger for television’s police procedurals has led to the much-reported popularity of true crime as a genre, fed by an abundance of podcasts and docudramas.

As Annette Hill wrote in the Oxford Research Encyclopedia of Criminology and Criminal Justice (OUP, 2017), true crime is ‘flourishing in commercial zones’ such as streaming services and video-on-demand.[i] The New York Times nominates Helter Skelter: The True Story of the Manson Murders (Norton, 1974) by Vincent Bugliosi as ‘the bestselling true-crime book of all time’; it sold more than seven million copies between its publication in 1974 and Bugliosi’s death in 2015.[ii] And in Australia, a thirst for true crime drove last year’s increase in the ABC’s digital-first podcast audiences, with almost half of the total reporting that they had tuned into a true-crime podcast ‘within the last month’.

Perhaps these appetites spring from an innate curiosity, from a thirst for situations in which mysteries might be solved, from a quest for vicarious danger. Perhaps they speak to a desire for stories that can be reduced to a shorthand of good or bad, wrong or right, despite the nuance or complexity they often possess. But whatever the lure of these stories, the issues at their heart continue to play out in contemporary Australia – in parlous rates of Indigenous incarceration, the ongoing detention of asylum seekers and the twin spectres of justice denied and justice wrongly dispensed.

QUEENSLAND’S NARRATIVE OF crime and punishment is framed unlike any other in Australia. This past July marked the thirtieth anniversary of the submission of the report from the Commission of Inquiry into Possible Illegal Activities and Associated Police Misconduct. The Fitzgerald Report, as undertaken by Mr GE (Tony) Fitzgerald QC, was the result of an inquiry that ran for two years from 27 July 1987, with updates to its terms of reference ultimately allowing it to call more than 300 witnesses, and to address not only police corruption but almost every aspect of the state government’s administration.

This edition of Griffith Review opens with four stories from Queensland: an overview of the legacies of Fitzgerald by Paul D Williams; a reflection by Gary Crooke QC, the senior counsel assisting the inquiry; Bill Wilkie’s account of the notorious Cedar Bay police raid; and the story of the genesis of the five mighty true-crime volumes that award-winning writer Matthew Condon has so far conjured from the state’s past.

It also offers entry points into a range of other stories of crimes and punishments, from the frisson of a proffered gun to a war criminal awaiting trial. There are reports from different frontlines: from the pools of people now employed remotely to transcribe court cases to the potential empowerment of micro-justice and the bystander approach. It examines crimes against the environment; crimes that suffer disproportionate punishments; and convictions where innocence is still maintained.

Among these sits the story of one woman who has endured the particular assaults and betrayals of incest, and of the dogged determination of a group of legal volunteers and helpmates to secure her some recompense. Gideon Haigh’s forensic reassembling of Natasa Chris’s story is both powerful and confronting: readers should note that it contains descriptions of violence and abuse, as do several other stories in the book. Indigenous readers are also advised that some stories in this collection contain references to people who have died.

THE WORLD PRISON Brief is an online database of information detailing rates of imprisonment around the world, maintained and updated by the University of London’s Institute for Criminal Policy Research. Its most recent data affords the United States the dubious honour of the number-one spot on its list of incarcerations, with just over two million people confined. More than one-fifth of these prisoners are pre-trial detainees or on remand. Of these, almost one in ten is held in a private prison, one face of the prison-industrial complex. This term was coined in the late 1970s as the tenets of private enterprise moved into correctional services. In 1983, the Corrections Corporation of America – the first private company to operate in this space – was established, with its first facility opening the following year in Houston. By 2015, the two largest prison corporations had a combined revenue of $US3.5 billion, and by 2016 private correctional facilities were being used by twenty-seven US states and the US federal government. -These figures reflect the enormous scale of this industry, a long way from the small number of individuals featured in Angus Mordant’s photo essay from Sterling, Colorado. This story, focusing on one prison’s music program, highlights the possibility of rehabilitation through creativity, collaboration and common ground.

Australia ranks ninety-second on the World Prison Brief list, with just under 43,000 prisoners in total – nearly a third of whom are pre-trial or on remand, and just under a fifth of whom are foreign-born. The most recent Victorian state budget allocated $1.8 billion to build a new jail near Geelong and to upgrade other prison facilities, while Queensland’s state budget allocated $620 million for a new men’s jail alongside the existing Southern Queensland Correctional Centre at Gatton. In pointing out that the state’s prison population had grown by 44 per cent between 2012 and 2018, a recent report by the Queensland Productivity Commission noted that such a rate of growth would require ‘an additional 4,600 to 5,800 prison cells by 2025’.

Australia’s most stark incarceration statistic is spelled out by First Nations communities in the Uluru Statement from the Heart, referenced in the essay by Ross Homel, the Foundation Professor of Griffith University’s criminology department: ‘Proportionally, we are the most incarcerated people on the planet.’ Indigenous Australians comprise 2 per cent of Australia’s population, but more than a quarter (28 per cent) of its adult prison population.

This collection also seeks to address such issues: in Homel’s overview of his own work with young people; in an examination of the dysfunction inherent in Australia’s bush court system; in Fiona Foley’s landscape-changing memorial to the crimes of colonial violence and dispossession.

This edition is published in partnership with the School of Criminology and Criminal Justice at Griffith University, which was established in response to the Fitzgerald Report’s recommendations. We thank them for their support, and for contributions from a number of their researchers.

THE BOOK’S FINAL essay is a conversation between the Iranian-Kurdish journalist, poet and refugee Behrouz Boochani and his translator Omid Tofighian, the first public discussion they had about Boochani’s award-winning book, No Friend but the Mountains (Picador, 2018). For more than five years, Boochani has been held in the limitless detention assigned to Australia’s asylum seekers on Manus Island – men surely held ‘pre-trial’, and foreign-born.

Boochani and Tofighian reframe Manus Island as ‘Manus Prison’, a designation they insist on for the place where Boochani is held indefinitely. And they insist, too, on drawing out the essential connection between Australia’s current treatment of asylum seekers and its treatment of this continent’s First Nations people.

Another island; another prison; another landscape of impossible beauty alongside newly limitless retributions and penalties. Another story of our crimes and punishments.