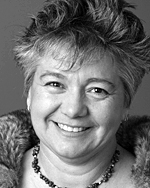 Melissa Lucashenko is a Goorie author of Bundjalung and European heritage. Her first novel, Steam Pigs, was published in 1997 and since then her work has received acclaim in many literary awards. Her most recent novel, Too Much Lip, won the 2019 Miles Franklin Literary Award and the Queensland Premier’s Award for a Work of State Significance. It was also shortlisted for the Prime Minister’s Literary Award for Fiction, the Stella Prize, two Victorian Premier’s Literary Awards, two Queensland Literary Awards and two NSW Premier’s Literary Awards. Melissa received a Walkley award for her essay ‘Sinking below sight’ for GR41: Now We Are Ten, and is a founding member of human rights organisation Sisters Inside. She writes about ordinary Australians and the extraordinary lives they lead, and her work has previously been published in GR 2, 4, 6, 8, 12, 26, 28, 34, 37, 41, 59 and 60.

Time to mention the war

Sinking below sight
Edition 41: Now We are Ten

How green is my valley?
Edition 12: Hot Air

Who let the dogs out?
Edition 8: People like Us

On the same page, right?
Edition 26: Stories for Today

Friday night at the Nudgel
Edition 34: The Annual Fiction Edition

Not quite white in the head
Edition 2: Dreams of Land