Turning things inside out 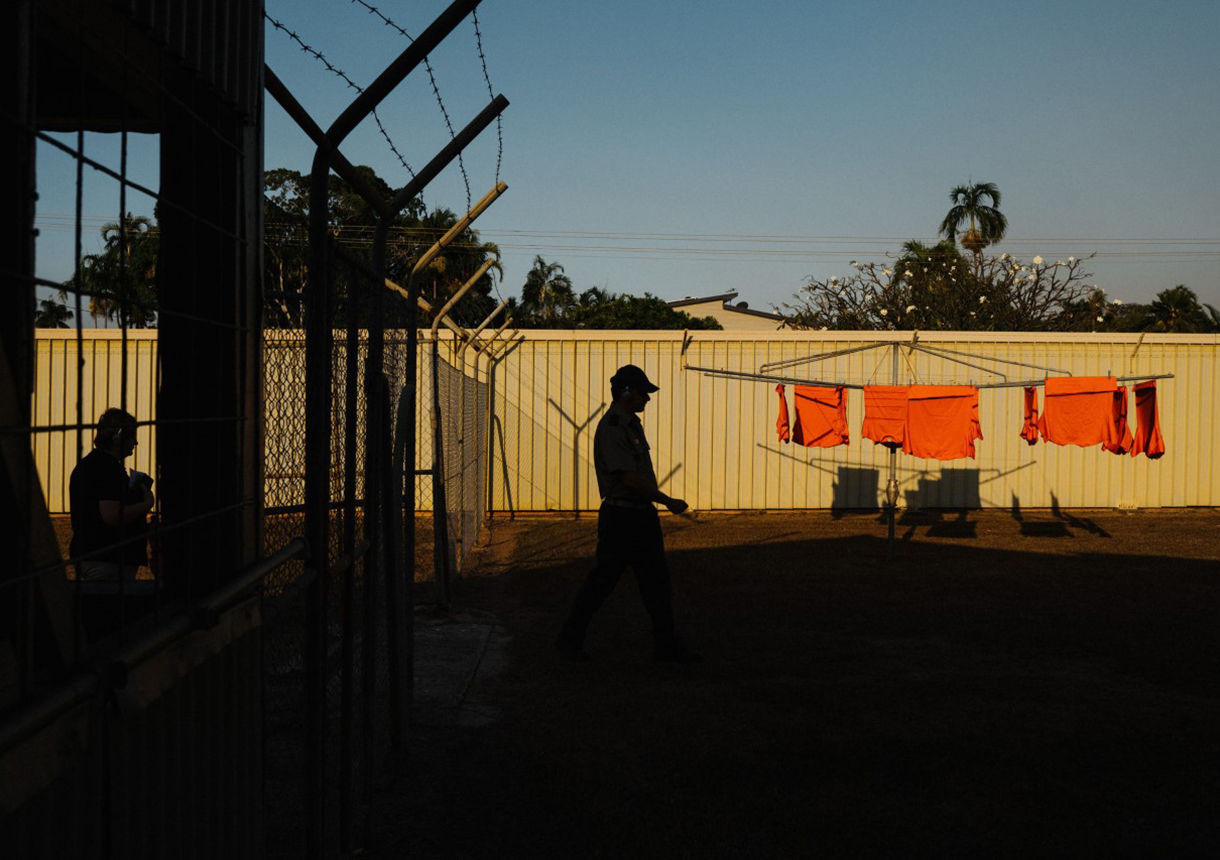 WHEN YOU'RE IN prison, every morning starts the same:

These are some of the first things that Melanie Mununggurr-Williams and I hear when we ask a group of women in the Darwin Correctional Centre why they’ve signed up to our slam poetry workshop.

We’re seated in a small, blue room on a spattering of beige plastic chairs. Behind us are a couple of shelves of dog-eared books, mostly Mills & Boon-style romances, the occasional sports biography and a rather large collection of English–Chinese dictionaries.

‘The men get to choose what we read,’ says one woman who’s serving her seventh sentence. ‘The books go through intel to the men’s library. They pick out the ones they want and then the dregs end up here.’

The Darwin Correctional Centre houses around 1,100 prisoners, about eighty of whom are women. Like a slice of pie, the female sector, also known as Sector Four, sits between industries, where the men do jobs like woodworking and food prep, and the men’s maximum security sector. A tall cyclone fence, clad in black plastic, separates the men from the women. Sometimes there is shouting and wolf-whistling through the wire but today it’s quiet.

We go around the circle introducing ourselves. The women come from all over Australia. Some are first-time prisoners and others have been in and out of jail since adolescence. One older woman is missing an eye. She tells us that she lost it in an argument over grog. Another has a severe limp from a bus rollover. Some of the younger, shyer women have found a comfy spot on a blue couch at the back of the room. They speak in whispers and giggles. Everyone wears regulation T-shirts, and I remember how an old lady from Galiwinku explained the colour coding to me: ‘Yellow and green is low security. That means you can go to work and you don’t get locked in your cell at night. Orange is for before you’re sentenced. Blue is medium security. And red, you don’t wanna be a red shirt. You get locked up in H Block and they only let you out for one hour a day.’

I look around. There are no red shirts in the room, but there’s plenty of green, yellow, blue and orange.

Melanie Munungurr-Williams, the 2018 Australian Slam Poet Champion, grew up in Yirrkala in North-East Arnhem Land and Canberra. She’s a black feminist with a reputation for writing raw and unapologetic poetry. She’s worked with young people in juvenile justice, but this is the first time she’s delivered a poetry workshop in prison.

I'm a fiction writer and the founder of StoryProjects, a creative agency that seeks to elevate unheard voices from regional Australia through storytelling. I've been working in Sector Four on an audio storytelling project, but this poetry workshop is a first for me too.

Mel starts by asking the women what they know about slam poetry.

‘Is it an angry poem?’ one woman asks.

‘It can be an angry poem,’ says Mel, ‘but it doesn’t need to be. It does need to make you feel though.’

In an environment where women are discouraged from crying (‘the officers might think we’re at risk,’ one woman says) and laughing (‘they might think we’re on drugs’), this poetry workshop offers a rare opportunity for women to be express emotion openly.

To demonstrate her point, Mel stands up, takes a couple of deep breaths and launches into her award-winning poem, ‘I run’.

The library transforms. All eyes are on Mel and there’s a hushed silence. The jigglers stop jiggling. Every woman is still.

When Mel finishes, the room erupts in applause and whistles. Faces are wet with tears, and a couple of women go to Mel and hug her. An officer taps on the window to check that everything is okay. We give him the thumbs up and he leaves. Inside, the women buzz with excitement.

‘Now, it’s your turn,’ Mel says. ‘I want you to think of a moment when you felt out of control.’

I’ve been working with these women for twelve months and I know this is a difficult ask. Many of them have complex trauma and have experienced sexual, physical and emotional violence. Remembering can be tough terrain. I check in to make sure everyone is okay and offer an out. One woman dabs at tears with the sleeve of her T-shirt, but no one leaves.

They close their eyes.

‘Think about that moment. What do you see?’ Mel asks. ‘What do you hear? Smell? Taste?’

The women are motionless.

And much to my surprise, without looking up, the women start to write. For thirty minutes, all we hear is the quiet rush of words taking shape on paper. I’ve never seen anything close to this level of concentration in the prison before.

For the next two days, we write, recite and edit our way through a collection of poems. It’s confronting work – for Mel and I, and the women in the workshop. We cry. We laugh. Sometimes, we hug. But mostly we keep turning back to the words. Always asking: how can we make this poem better?

I’m used to working with writers who are plagued by their inner critic (myself included) and one of the most refreshing things about these workshops is the lack of self-doubt. Women who have never written a poem before stand up and share their first drafts with the group. Those for whom English is a fourth or fifth language work with peers to edit their work. Someone always scribes for the old woman with one eye. No one seems to worry about not getting it right or being shamed. Yard politics dissolve and women who might not usually discuss their inner worlds share intimate details about their experiences.

It is with great excitement that we share this collection of poems – both written and read – with Griffith Review and its readers.

Author’s note: The initial workshops were such a success that the Prison Songs Impact Campaign funded a 2020 poetry pilot in Sector Four allowing women access to regular workshops, a collection of poetry texts and pathways to publication. If you would like to donate poetry texts to our program, particularly texts by Aboriginal women poets, we’d love to hear from you. Send me an email at: [email protected]. Big thanks!

My mother passed away while I was in prison

I feel manymak now
I can see
The clouds – mangan
grey and blue and green
like there’s another planet
wiripuwanga
up there
You can see yourself
up there
I can hear the ladies talking to me
Making jokes – biyarrmak
Making me happy
Don’t think about the sadness
Here, in prison
doesn’t matter we never meet
we can help comfort you
Don’t get scared no more
Don’t get sad
no more

It’s like the sound takes you away
to another place, another time
full of noise and happiness

It’s like a rushing creek, bubbling over smooth round rocks
under green shady trees
away from the heat of the day, birds and cicadas chirping

It’s like a gushing gurgling downpipe, pouring out
during a grey haze of wet season storm
that could go for minutes or days

Then the sound stops

I’m out of toilet flushes

When I die, I go back
to country

MUSTER UP, MUSTER UP, FOR FEED UP
THE RING MASTER
RESOUNDS

SOGGY SANDWICH … A SWAP ON THE SLY

Actions taken
before thoughts get thought
just one moment
an instant, that seemed like the only option

Minds clouded with spirits
of liquid and soul
offensive
action taken by me, from me
for threats so small

The torrents of life forcing me along
to the place I’m meant to be
through rapids, over cracks
barely moving in a stagnant pool