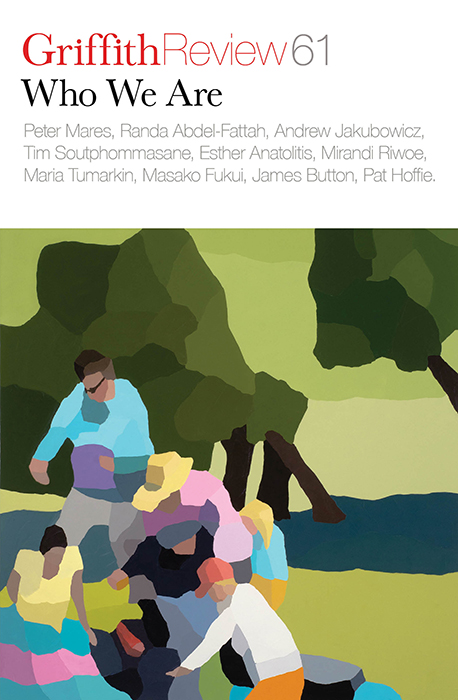 OUR FOOTSTEPS ECHO as we climb the stairs. My grandma holds my hand.

Shhhhh – be quiet! My grandpa is sleeping.

The third-floor flat, the heavy wooden door, and inside the smell of warm pipe tobacco and homemade cakes.

Take your coat off – hang it on the coat rack. Take your shoes off – put them in the shoe rack. Put on your slippers. Mine are red and my grandma’s are blue. My grandpa’s are brown, but they are in his room where he is sleeping.

Down the hall, past my grandma’s bedroom and past my grandpa’s bedroom, past the green-tiled bathroom and into the small, light kitchen. My grandma puts the cloth shopping bag on the table. It has flowers on it and zips up into a small leather wallet when it’s not being used. It is a good bag and it holds a lot. It comes from Czechoslovakia.

My grandma fills up the kettle over the sink and sets it on the stove. She lights a match and the gas ring explodes blue – pooof. That sweet smell of gas. My grandma blows out the match, then breaks it in half with her fingers. She drops the broken match into a glass ashtray. It’s full of match halves – one half clean, the other blackened and burnt.

I hear the toilet flush. My grandpa is awake.

My grandma scoops loose tea into the shiny tea pot. She smiles at me and then begins to sing:

I join in with the last line, and just like that my grandpa opens the kitchen door. He’s wearing his white singlet and striped pyjama bottoms and his brown slippers, his face still puffy with sleep. I laugh at his crazy sticking-up hair, at the way he always looks so surprised to be alive. He sits down at the green table next to me. He pats my head.

My grandma makes the tea.

I’M SAILING ACROSS space – far from Earth, and there is nothing but black and the distant light from stars that shine. But I can see her now, just in view – the little deep-blue planet. Neptune.

A flute plays. The keys of the celesta chime.

I fly faster, I move with speed and the planet gets bigger, brighter, until there is nothing else but blue.

High voices begin to sing, a dream calling me – pulling me in. I reach out my arms, my fingers. Closer, closer – I try so hard to touch the surface, but the celesta chimes again, and Neptune begins to fade. She becomes see-through, translucent, and my hand slips right through.

The singing gets softer, quieter – softer, until there is no longer any difference between sound and silence.

Dappled light through the lace curtains. The ticking of the Smiths clock.

I’m sitting on the upside-down cream footstool – my spaceship. Three wooden legs stick up in a triangle around me, little metal feet on the end of each like antennae.

The tape in the stereo runs fast to it’s end and clicks off. Everything is still. The coffee table, the TV with the lace doily on top, the sofa underneath the double windows, the gas heater, the mantlepiece, the framed tapestry of a city far away with bridges and a river and a castle and a dark sky. The old city of Prague, alive and real in the room. The third-floor flat.

My grandpa’s heavy breaths. He is asleep in his armchair. I stand up and look at him. So peaceful, his face smoothed down with sleep, his arms crossed on his lap. I don’t want to wake him, but he opens his eyes.

My grandpa sits up and taps his pipe out in the ashtray, the contents grey and long gone out.

Side two – the best side: ‘Saturn: The Bringer of Old Age’; ‘Uranus: The Magician’; ‘Neptune: The Mystic’.

Neptune was my favourite planet, and ‘Neptune’ was our favourite piece. My grandpa thinks that the celesta is a magical instrument and I always listen out for it in each different track. Holst: The Planets.

GOLD COINS IN a jar. An old Nova gherkin jar.

Nova gherkins were the best ones. After the Iron Curtain came down, you couldn’t get them anymore. I never found a gherkin that was as good as those Czechoslovakian Nova gherkins – not even close. I used to eat one everyday with my lunch and I would always save it until last, until I had finished my roll, because then the taste of the gherkin lasted longer. Sometimes when my grandma was asleep in her chair, my grandpa would sneak one out of the jar and crunch it down quickly with the fridge door open. He really loved those gherkins.

But every gherkin was rationed. And every gold coin counted.

My grandpa would sort through his coins in the late afternoon, before he had to get ready for his night shift at the factory where he was a night watchman. He’d take his dinner with him – two tin plates together like a clam shell. My grandmother’s cooking, rich with butter and salt, and fried – golden goodness.

My grandparents saved their one-dollar coins to buy aeroplane tickets. They managed to do this every three years, sometimes every two years if they were very careful. If they saved hard.

They got the cheapest tickets.

They took the longest route.

In that small, dark travel agent on Elizabeth Street, near the old market stinking with meat and cheese and fish, a Greek man held out the book of tickets for my grandpa to study. My grandma held my hand. ‘Melbourne – Sing a pore re. Sing a pore re – Athens. Athens – Frank a furt. Frank a furt – Praa g.’

My grandpa hated flying. He got claustrophobic and paced and sweated and tried to calm himself by smoking his pipe. Then smoking was banned. Things got worse for him after smoking was banned. He had to fight the urge to smash the window or open the emergency door and jump out. It was a battle to hold on. Sometimes he thought he might start screaming. But he never did. He made it – every time. He wanted so badly to go home.

No man is an island

IT WAS THE best part of the day when Mr Peters read to us.

He was reading a book that he had written and it was about some kids that had found a portal through time. I don’t remember what it was called or the names of the characters now, but I remember that I was... Read more