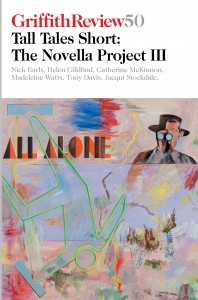 Close to the edit

THIS IS THE second year that I’ve been involved as an editor of the Griffith Review novella edition, and it’s an honour to be part of this wonderful initiative. It has certainly proved popular with writers, with a record 271 entries received this year, presenting the judges – Brian Johns, Jacqueline Blanchard and Cate Kennedy – with a demanding job.

Novellas are one of those things (like pornography) that defy simple definition. More words have been expended on trying to identify what a novella is than exist in the longest of novellas. Often the focus is on specifying their length, but it seems an unnecessary – and somewhat unilluminating – exercise to insist on pinpointing their upper and lower extents.

More helpful are the oft-cited descriptions of novellas, such as the view of Judith Leibowitz that the novella is a form with the double effect of ‘intensity and expansion’; Stephen King’s claim in relation to its commercial limitations that it is ‘an ill-defined and disreputable literary banana republic’, and George Fetherling’s wonderful remark that to reduce the novella to nothing more than a short novel is like ‘saying a pony is a baby horse’. Yet my favourite recent comment on novellas comes from author David Mitchell who, at an event in Melbourne earlier this year, said: ‘I like the length of a novella… It’s short enough to be a getaway car from the cops of boredom.’

And that’s exactly what each of the novellas in Tall Tales Short is: an escape into another time, place, consciousness, way of life and beyond, where you will be fully absorbed in that novella’s self-contained world.

Once the selection of five winners had been made by the judges, the novellas were passed over to me for editing. Editing is a largely invisible profession and that’s the way it should be: the author’s name is on the cover of the book or, in this case, at the head of each novella. As a result, many people are mystified by what editors do beyond correcting grammar and punctuation – and it’s true that we do score highly on the pedantry scale. But by the time you get to focus on that level of detail, the hard yards have been done – what you’re actually talking about at that stage is proofreading.

An editor’s role starts much earlier, and involves deep engagement with an author’s work – in my view, a truly pleasurable process. It requires tuning into the author’s wavelength and channelling their vision for their writing; I realise I’m now making it sound rather creepy, akin to being a stalker or committing a version of identity theft.

My goal as the editor of this collection was to work closely with the authors to make each of their novellas the best possible version of itself. The editor should be the ideal first reader, alerting the author to the points in their writing that might confuse or jar, that don’t ring true, that draw attention to the writing itself; most importantly, identifying those moments that potentially interrupt the reader’s suspension of disbelief, breaking the spell that an author has cast. In my mind, the editor is the champion of both the author and the reader, ensuring that the connection from one to the other is unimpeded.

It’s not for nothing that editing is often referred to as ‘invisible mending’: the trims and insertions or rearrangements should be seamless.

One fundamental tenet of editing that I could jettison between the individual novellas was the demand for consistency, and thus you will encounter a range of approaches in terms of style, tone, points of view, language and so on. What each of the novellas share, however, is a strong narrative voice, that aspect of writing that is almost impossible to impose from the outside and, I would contend, to teach. It’s up to the editor to identify lapses in that voice.

Within these pages, you will discover Nick Earls’ arrogant, self-absorbed rapper, over-compensating for his troubled upbringing and lingering insecurities, as seen through the eyes of an ageing rock journo dealing with his own family traumas; Madeleine Watts’s impressionable teenage girl who falls under the sway of an older artist, at a time when her own sense of self is fragile and her understanding of the power of desire inchoate; Catherine McKinnon’s lowly eighteenth-century ship’s boy who provides an insightful perspective on cross-cultural misunderstandings and ‘first contact’ as he accompanies Bass and Flinders on an expedition by sea; Tony Davis’s jittery digital fugitive who only has to survive a long-haul plane journey before the full extent of his explosive whistleblowing can take effect; and Helen Gildfind’s damaged and alienated protagonist who is trying to both tame his own anger and come to grips with the nature of love and friendship in a world where so many men do terrible things.

Tall Tales Short is a rich and varied collection that showcases the talents of five impressive authors and the diversity of the novella form.