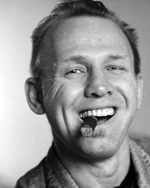 Wayne McLennan grew up in Cessnock, New South Wales, and was a professional boxer and a bank teller, amongst other things.

He left Australia in 1978 and travelled extensively throughout the world, becoming a gold miner in Costa Rica and the skipper of a fishing boat in Nicaragua. By 2005 he was living in Amsterdam with his wife Carolijn Visser, also a writer.

In one of his many adventures (retold in his novel Rowing to Alaska, Granta, 2004) he rowed from Seattle to Alaska, a distance of 1,600 kilometres. He was rightly acclaimed around the world as a brilliant new voice; the book was a New York Times Notable Book in 2005.

What made this all the more special was that McLennan, well into his fifth decade, had never harboured literary ambitions and only began writing after prompting from his wife and boredom induced by snow-bound isolation in an Estonian winter.

His book Tent Boxing: An Australian Journey was published by Granta in 2007.

A night at the fights
Edition 18: In the Neighbourhood