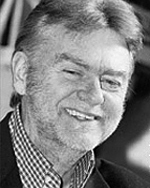 Melbourne-born Desmond O'Grady published more than a dozen books of fiction and non-fiction in America and Australia and wrote seven plays for stage and radio. His work ranged from short stories to histories and was translated into several languages.

He wrote from Rome for The Age and The Sydney Morning Herald. He also contributed to publications including The New York Times, The Washington Post, Newsweek, the London Daily and Sunday Telegraph, The Sunday Times and The Guardian. He was also the Vatican correspondent for the National Catholic Reporter during the Vatican Council.

A new normal in Italy?

At home in both places
Edition 6: Our Global Face