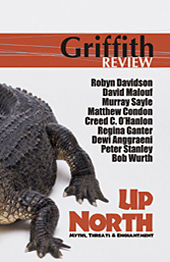 MAY 1995. AT an open-air market in Port Moresby, Papua New Guinea, brightly coloured bilums (string bags) hang from the wire perimeter fence and the concrete benches are laden with organically grown produce – oranges, sweet potato, peanuts, coconuts, cabbages and local greens. Clutching a handful of coins, I walk gingerly through the market. People say it's dangerous, but I'm weary of the constant barrage of security advice. Surely it's not so bad. Anyway, I want to buy some fresh limes.

It is only 9am, yet I can already feel the sweat soaking into my shirt. I admire the displays of fruit – with modesty and pride, the women arrange their produce like still-life paintings. The nests of peanuts are tied on the stems with twine and perfectly spaced in neat rows. The oranges are in small piles, sprinkled with drops of water. Knobs of garlic, like tiny fat moons, are laid out in delicate sequence on a banana leaf.

Suddenly, people start to run out of the open gate, along the potholed road, chasing an erratic figure amid wild shouts of anger. I freeze. Warnings about civil disturbances, personal security, violence, the vulnerability of expatriate women, all jostle for prominence in my mind.

Peter, a tough and energetic fruit seller who comes every week from the Highlands in a battered bus, is watching the melee over the fence near where I stand. "What's happening?" I ask in faltering Tok Pisin (pidgin) as the shouts and cries continue. "Wanpela stil man, em stilim bak." (A thief, he stole a bag.) He shrugs and squints through the fence. "Ol paitim em." (They are beating him.) He looks satisfied and smiles. "Yu no ken wori." (Don't worry.) "Mipela bai lukautim yu." (We will look out for you.)

THEY DO THINGS differently in Papua New Guinea. After growing up the UK and later moving to Sydney, I first came to PNG in 1993 as a foreign correspondent for Australian Associated Press. I recall well the day I arrived in the infamous city of Port Moresby, my mind full of a conflicting array of impressions of my new tropical home – the heart of a modern developing nation in the midst of ancient, complex cultures. Surrounded by barren hills, the city was dusty and dishevelled. Many roads were full of potholes, yet the buildings were modern. Although there were cars and trucks, most people were walking, moving quietly and slowly under a fiery tropical sun.

My colleague, another woman who had braved the posting alone for a year, collected me from the airport. Outside the house, we waited for the electric gate to open. I digested with mild dismay the razor wire on top of the steel fence and the security guard watching from the other side of the street. Two young men, roughly dressed, were walking towards the car. The atmosphere was suddenly heavy and oppressive, and my colleague eyed them warily until they passed. I felt nothing but registered her fear. Inside, the two-storey house was spacious and light, surrounded by towering rainforest trees. The living room was bright, louvred windows dominated every wall. I felt a rush of satisfaction.

Then I saw the bars on the windows, the alarm system, its red light blinking on the wall. A moment later I noticed the extra steel bolts on the doors to the veranda. Two dogs began barking in the garden below.

"God, there's enough security in this house," I remarked jokingly to my colleague. "No way," she replied. "The houses at the Australian High Commission have proper security. They have alarm buttons on the wall. They have 24-hour guards and internal steel doors you can lock at night so the raskols, even if they break in, can't get into your bedroom." She showed me the bolts on the bedroom door, the machete she kept by her bed and advised me to get a can of Mace to put under the pillow. I was horrified. She gave a sympathetic smile: "Welcome to Port Moresby."

Being a white woman alone, something of an oddity in PNG, I found it difficult at first to find my feet. My colleague had told me of the positive sides to expatriate life in Port Moresby – the parties were great, weekend sailing a must, the restaurants fantastic, and there were at least two clubs for swimming, sailing, and socialising, that I should join.

So I tried it. On my first evening out I went down to the local Yacht Club, and found the expatriate community very welcoming. I was new and keen to make friends, and they knew the ropes. But it was not long before I stopped going. I found it increasingly difficult to retain a positive outlook on the country as people regaled me with endless horror stories of rape, hold-ups and violence, and gave me well-meaning advice about what I could or could not do. I also felt that, in subtle but powerful ways, I was being co-opted as one of "us". While I understood and appreciated the gesture, I didn't want to compromise my ability to move freely between the black and white worlds. I wanted to make my own judgments about what I found.

Violence, I soon learned, is the daily backdrop for life, particularly in the cities and towns, and the notorious highlands. The violence is often culturally driven, with retaliatory murders, revenge rapes, and beatings as punishment for laws violated. For expatriates, the constant cycle of violence is frightening to comprehend, and the problem becomes so generalised that every Papua New Guinean is regarded with suspicion and hostility.

During my visits to the Yacht Club, I had begun to inwardly shudder – and still do – every time I heard a sentence beginning, "These people...." or "Nationals don't have a clue..." or another classic "What do you expect? They've just come down from the bloody trees." I had come to Papua New Guinea to experience the culture, not to condemn it. As a writer, I was supposed to offer insights, not just repeat prejudices. But I found in many expatriate dominated settings, very few people who had enough empathy or insight to help me understand the cultures of my new-found home.

IN MANY WAYS, this is not surprising. Most foreigners living in Port Moresby – described recently by the Economist Intelligence Unit as the worst city in the world for expatriates to live – feel they are a group under siege and develop the mentality that goes with it. Added to that, the more than 7,000 Australians living in PNG have been long-accustomed to a steady drip of alarming headlines about their former colony – the notorious raskol gangs, the crime rate, pack-rapes, and armed house robberies. In other countries, PNG hardly rates a mention.

I came into much closer contact with the expatriate community when I married in 1995. My late husband was a British-born Australian, who had lived in PNG for 16 years, and had a rather unusual attitude to security. A gentle man, he simply did not register the signals of aggression that other expatriate men reacted to. So for him, security was simply a matter of being sensible about where you went. Our house had one barbed wire fence at the top of the block, we had two (rather ineffectual) dogs, and a security guard who worked at the flats next door, but who often stood by our gate with a bow and arrow.

After two years in PNG and being bombarded with horror stories, my husband's relaxed attitude was very refreshing. It helped me realise, that although I had to live behind a barred window, I need not be a prisoner in my mind as well. For this reason we went walking most afternoons to places that were probably not recommended but were exceptionally beautiful – to the top of Paga Hill to gaze across the Coral Sea as the sun was setting or to the mountains behind Port Moresby, picking our way past small thatched houses, children running behind us yelling and screaming in delight. Casting off our fears, from time to time we felt as though we were living a reasonably normal life.

Most of our expatriate friends lived in apartments or enormous brick-built compounds with razor wire and 24-hour security. Like me, when they left home they were vigilant, locking car doors and windows, fearful as they waited for the electric gate to swing slowly open at their destination. Even going out with friends, carried the constant threat of violence. Nothing ever happened to me, or anyone close to me, but the thought was always there.