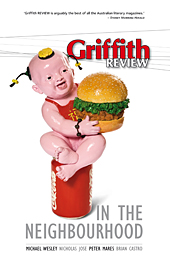 WHEN THE TINY Airnorth plane landed at Dili airport I knew something about campaigning but little about Timorese politics. Like even the most casual Australian observer, I recognise our neighbourhood is a vastly diverse one. A comfortable friend to the south-east; an arc of unstable and developing nations to the Pacific north; the largest Muslim nation on the doorstep; beyond, the former tiger economies and the world's most populous nations.

I arrived as one of four political staffers and consultants participating alongside Timorese counterparts in a seminar called 'Keeping Your Campaign on Track', a program organised and funded by ALP International Projects.

Reading the dossiers on the flights didn't prepare us for the ten-minute drive from the airport to the centre of Dili: the filth and heat, the stray pigs, dogs and goats wandering aimlessly alongside slow and battered Mitsubishis, down potholed roads cluttered on the edges by locals selling motorbike fuel in old plastic water bottles. The dossier didn't prepare us for the windowless graffiti-covered homes, the idle young men out the front, or the burned-out roofs over the shells of schools and other buildings. Or for the camp near the airport where the frightened fled a recent crisis and stayed because the food was a bit better and the children that little bit safer.

What Labor politician Wayne Swan wrote of suburban Australian society – that it comprises a patchwork quilt of winners and losers from change – applies equally to the regional neighbourhood. As the region grows in wealth and population, not all share equally. That's why political and economic engagement is so important. The major Australian political parties maintain and promote links with regional counterparts. Seminars are organised to exchange ideas on policy, media and campaign organisation. That's how I found myself landing in East Timor in May 2007 as part of our small delegation of Australian political colleagues guided so ably by well-connected and savvy Timorese friends with an Aussie twang picked up from stints in Melbourne.

East Timor is among our poorest neighbours, and the second youngest nation in the world. AusAID points to life expectancy of fifty-six, an adult literacy rate of 58 per cent, and GDP at just US$367 per person. These are the statistics brought into such stunning relief by frequent trips standing on the back tray as our guides' red ute wound slowly through town each day. If China is the sleeping giant, and Indonesia the bogey man, Timor is the bullied child of Asia. It has copped the worst: a cruel and brutal Indonesian occupation and its repercussions, democratic teething challenges, more recent troubles between the military and the police and partisan backers.

Personal insecurity exacerbates other challenges: illiteracy, poor transport, inadequate communication infrastructure, few resources or proper training. The obstacles in Timorese society are the same as those that challenge its developing politics. A fraught situation made more difficult by violence and misunderstanding in an infant democracy yet to find its rhythm or voice. Hence our seminar about professionalising campaigns.

OUR GROUP COMPRISED both Timor watchers and non-experts like me. An experienced Timor observer wouldn't have mistakenly thought the studious-looking man sitting beside him at a political gathering on the first day in town was former Prime Minister Mari Alkatiri. A seasoned Timor-watcher wouldn't be surprised to hear that Alkatiri's local reputation is far more positive than the Australian media suggests.

No expert would ask, as we did in the early hours of our seminar, about the letterboxing of political pamphlets when no letterboxes exist. Nor would those experienced with the conduct of Timorese politics be so shaken by the man who raised his hand and asked us, as political professionals, what we used to deal with constant and unrelenting threats on our lives.

A Timor expert wouldn't have been as disturbed by the street in Dili to which our guides took us to illustrate the story they told of policemen sprinting down the road, stripping off the uniforms that made them targets as they ran. No expert would have been surprised that an infrastructure budget in the hundreds of millions of dollars lay unspent, because to build new structures was to invite almost immediate destruction and vandalism.

Not being an expert, I found all these scenes and stories confronting. I was shocked, saddened and angered; constantly taken aback by what I learned while I was supposed to be teaching local party officials about campaign strategy and organisation on a hot May long weekend.

POLITICAL CAMPAIGNS AROUND the world are becomming more and more alike: more constant, more expensive, more personally negative, less relenting. Political seminars are becoming similar too, as campaigners gather to mutter darkly and nod knowingly about emerging certainties and enduring truths. The most popular observation, it seems, is that fear beats hope. In Australia it remains the chosen adage of the professional political class – the one that explains the last four federal elections and countless state campaigns.

So when accepting an invitation to participate in the Timorese seminar, my first thought was how to take these lessons and translate them across the Timor Sea to the parties of this young democracy. How to talk to these nascent political professionals about the lessons the more mature democracies have learned, but how to give them at the same time a message more aspirational, more positive than the victory of fear over hope. How to wrap up in the inevitable discussion of base political strategy and communication tools a message that professional participation can be, as Bobby Kennedy described generations ago, an honourable profession.

In one respect, politics is the same everywhere. On the first day of our trip we saw, at a gathering of all parties to sign the new code of conduct governing elections, a scene that would not have been out of place in Canberra or the other political capitals. Clusters of hangers-on, a pecking order of journalists, the constant flashing of cameras, radio microphones in front of those deemed newsworthy. Plus the confident strut of political leaders, in this case many of them the proud men of the revolutionary struggle and known to Australians: Jose Ramos Horta, Xanana Gusmao and Mari Alkatiri.

Politics is the same everywhere in another important way: it takes courage to participate. Only the brave volunteer and only the strong-willed persevere. It's the magnitude of that courage that differs, from the Timorese risking their lives and their families' safety at the extreme end, to the budding Australian politicians' courage in putting a hand up for a life separated from family and subjected to intense public scrutiny at the other. These challenges are not in the same league, but courage is required for both.

The 426,210 Timorese whose ink-covered index finger proved they voted in the legislation elections of Saturday June 30, 2007 provide us with the best available illustration and evidence that in, in politics, fear doesn't necessarily always beat hope. That 80.5 per cent of registered voters braved possible intimidation and ignored historical violence to front up with their registration cards is something that cannot be ignored. Nor can the fact that the first election conducted by Timor's own Commissao Nacional de Eleicoes, spread out over 708 polling stations to elect sixty-five deputies, went so successfully and without major incident. These are feats worth celebrating, no matter what the election outcome.

NOBODY CAN CLAIM Timorese politics is perfect, or all the challenges have been met or all the obstacles cleared. The media seminar next door to ours, for example, heard of a local press that fell well short of 'free' and listened to anecdotes of government pressuring newspapers not to publish stories of famine, and of the bullying of journalists.

If anyone has a reason to distrust politics it is the Timorese. If anyone can be excused for not participating, for not dipping their finger into the ink well at the polling station, it's them. They could easily be forgiven for putting safety and experience above participation. But they're tougher than that. More hopeful.

As is often the case, going somewhere to teach means going somewhere to learn. This was no exception. There was little use talking to the East Timorese about fear and hope when they have better conquered it. When you're a big wealthy country in the neighbourhood with powerful friends, and when you have provided $570 million to countries like Timor in the eight years to now, it's tempting but dangerous to do more lecturing than learning. Tempting to think you have more to teach than to learn from the poorer and younger democracies like our Timorese friend to the north.

But in just three days in Timor I learned more about fear and hope in politics than in a decade at home. With all their challenges, if Timorese hope can beat fear in their national elections there's no reason why optimism and the future, can't trump handouts and backwards pessimism and the politics of lowest common denominators, in Australia as well.

Three days in Timor doesn't make you an expert on its politics, but it does teach you this.