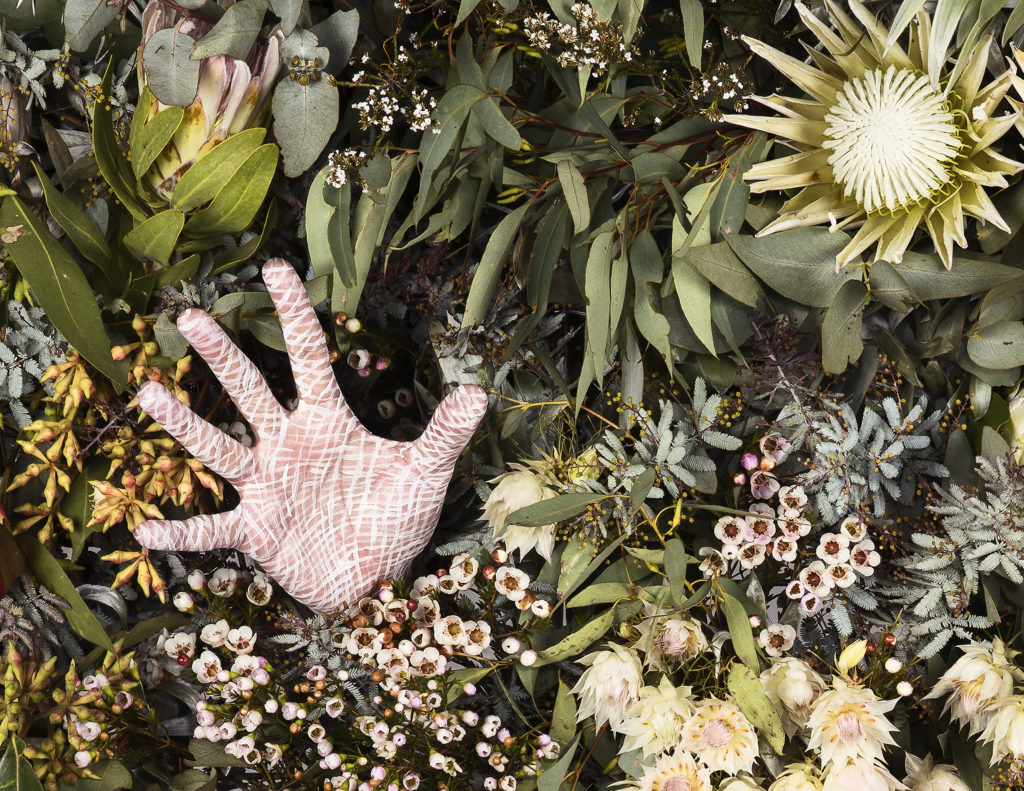 Christian Thompson’s digital photographic prints could be stills from a morality play in which he performs the sole protagonist. Composed as overtly poetic allegories with quixotic themes from the comedic to the mock tragic, they are thick with suggestion and references and ever open to interpretation. 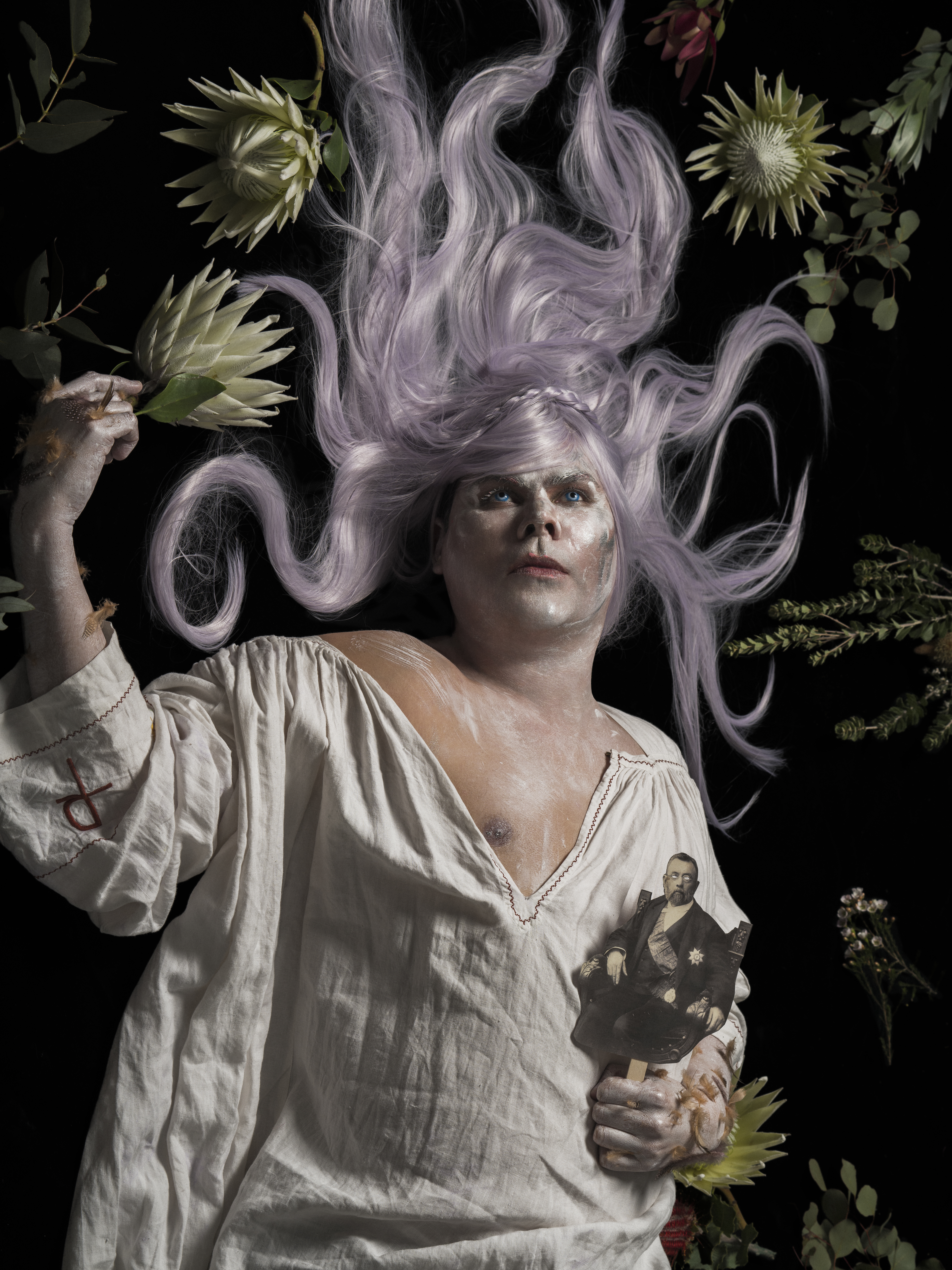 Representing arguably the oldest performance genre, solo storytellers featured prominently in traditions as different as the tribal oracle and medieval travelling troubadour and were extraordinarily popular in Victorian entertainment – all periods that Thompson’s work references. 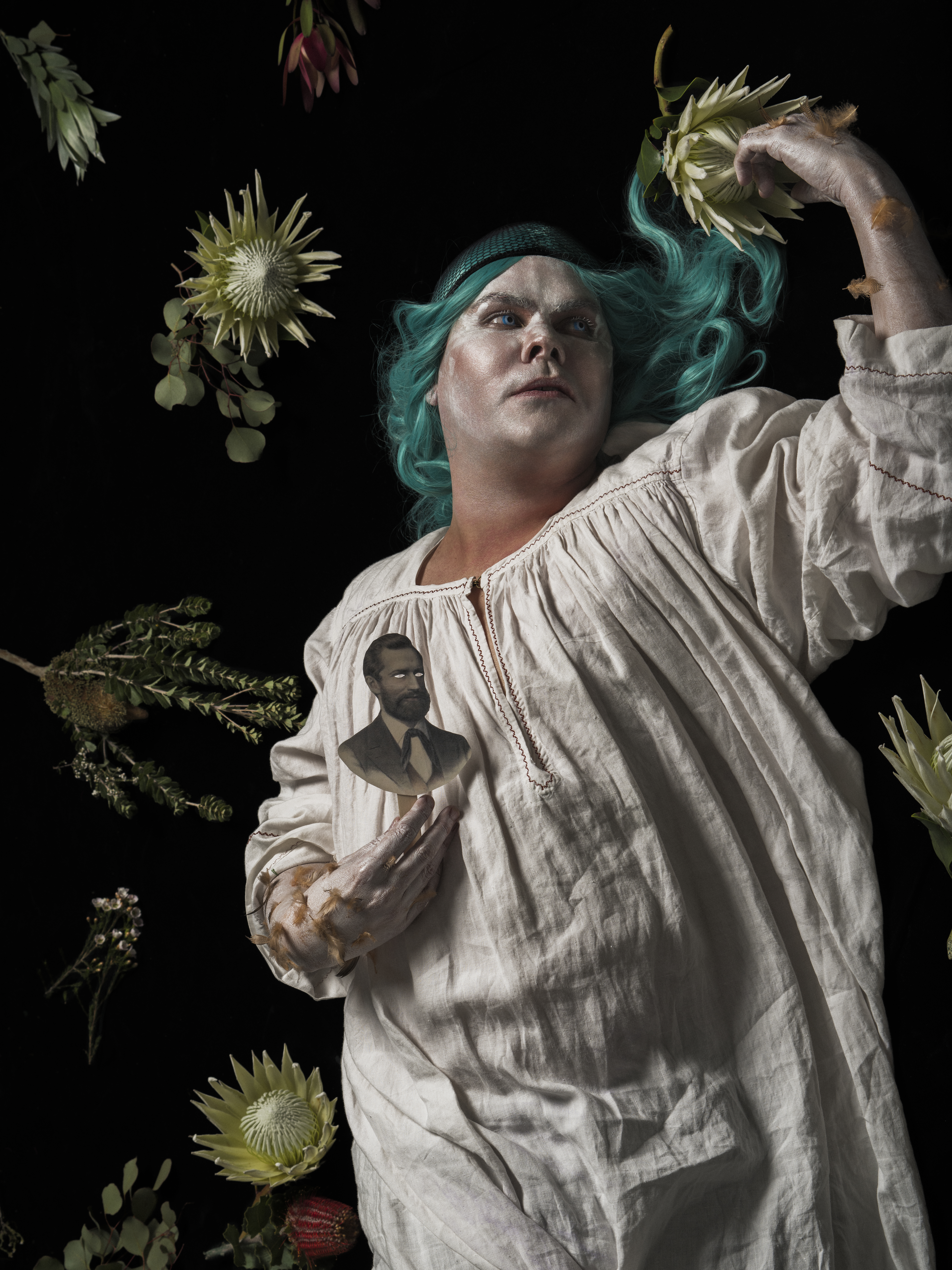 Thompson plays a spirit figure posed in his signature baroque regalia. One spirit ascends into the clouds; one is beatified in a halo of everlasting daisies; another seemingly drowns in a sea of Australian natives. The others are framed by proteas that blaze from a dark sky like Van Gogh’s stars, their hair tossed (I imagine) by the winds of an approaching storm. Cradled in their hands are the masks of three bearded, besuited Victorian gentlemen, cut from nineteenth-century prints. What, you wonder, is the moral of this play? The proteas would seem an Australian reference, but since this plant is native to the ancient continent of Gondwana, the protea is truly cosmopolitan – a native with roots in the three continents that now form the southern hemisphere. 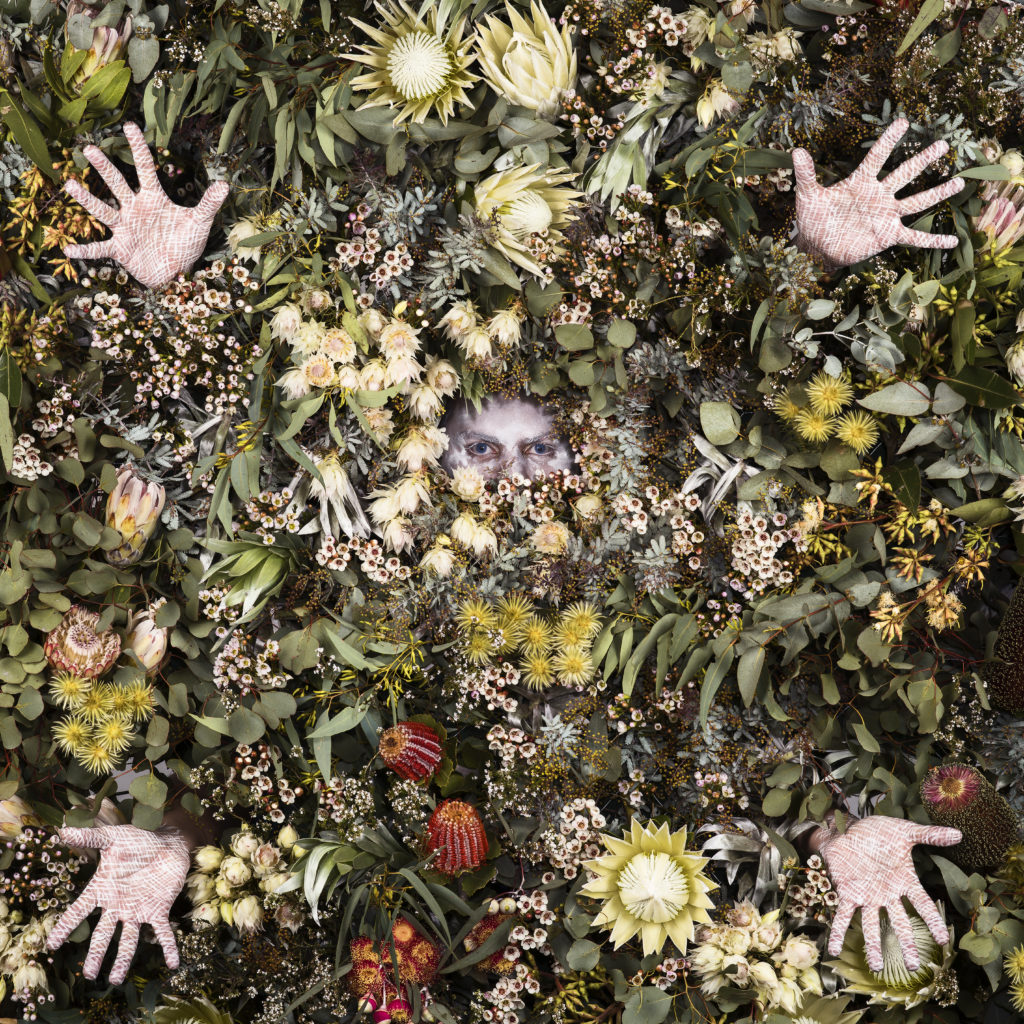 The masks are of German colonists made good in the British colonies of New South Wales and Victoria: the colonial politician Bernhardt Otto Holtermann; the botanist Baron Sir Ferdinand Jacob Heinrich von Mueller; and the explorer Ludwig Leichhardt. Each played a central role in building different aspects of the Australian colonial archive. 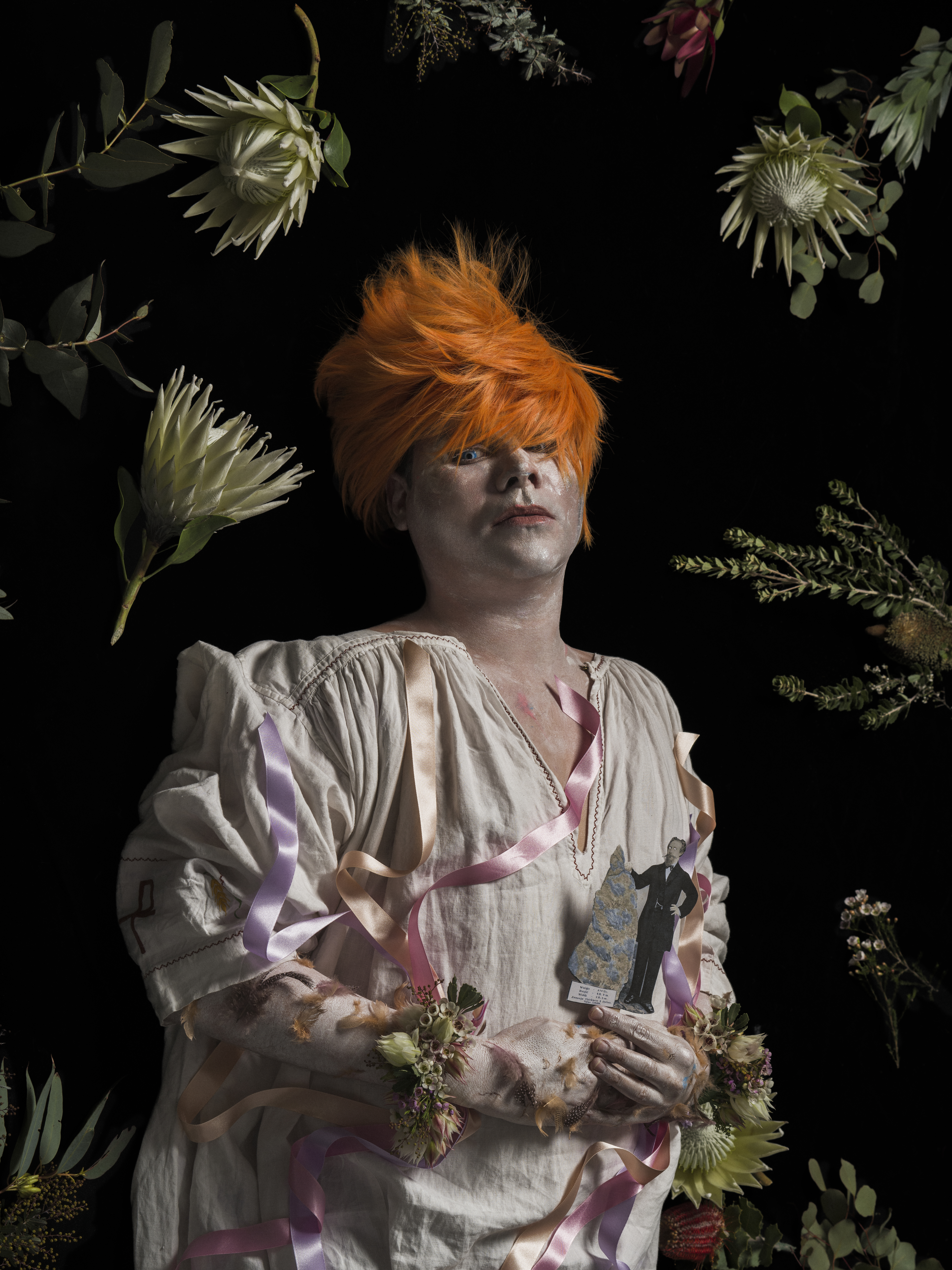 Like a seasoned actor, Thompson’s scenarios are a series of maskings and unmaskings. What we make of his rich allegory of baroque masquerade, colonial tales, Freudian and other myth depends on our own imagination. For him, the mask is a means of unconcealing, not effacing, his origins; it is a window into his Bidjara ancestry, but also into the global histories of settler colonialism in which he negotiates his other (Irish, English, German and Jewish) ancestries and peripatetic life. 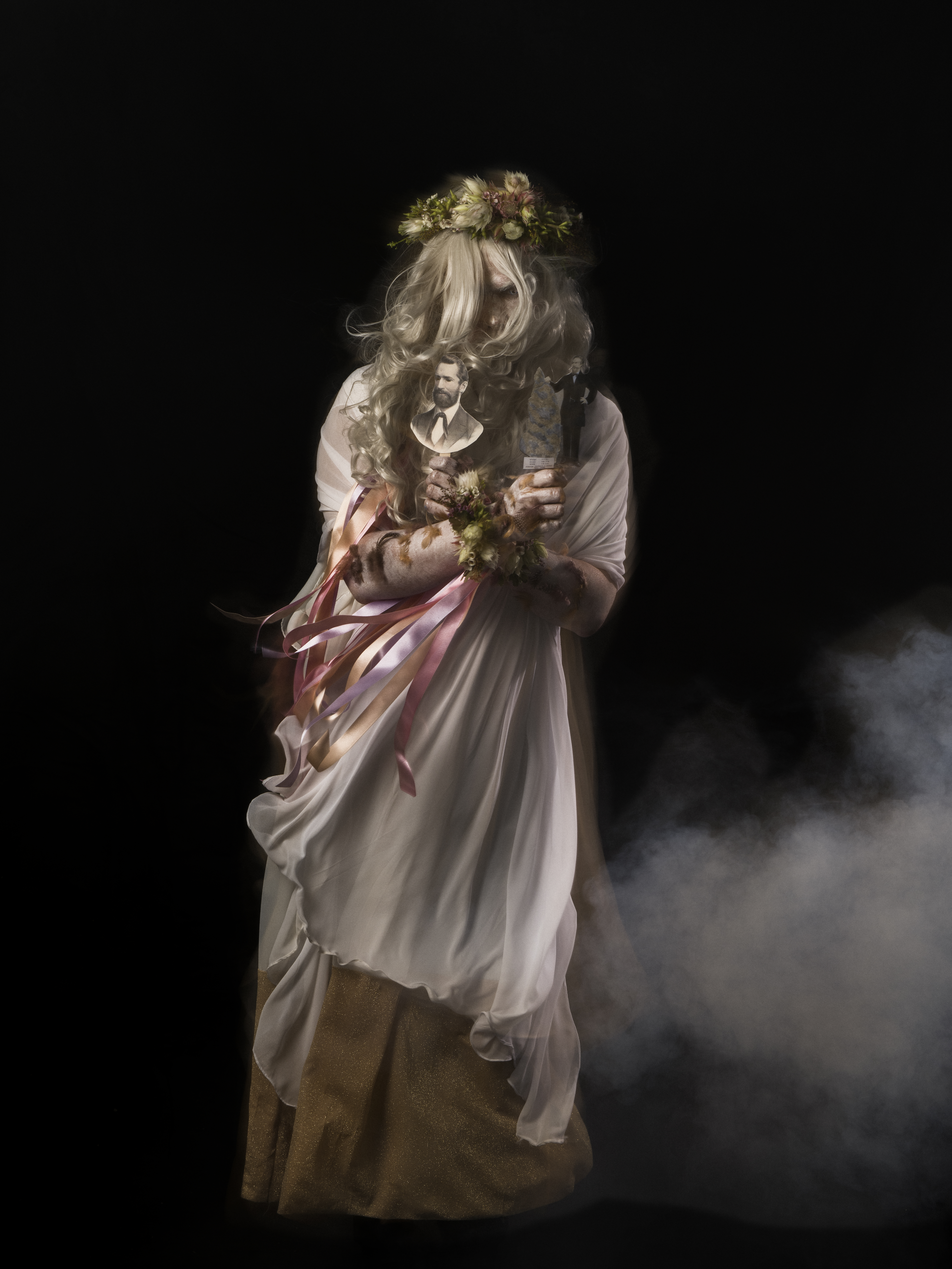 For him this rich lode of differences is to be worked and celebrated. Thus, his masks serve the ontological function of providing an imaginary space or clearing for the showing of his being, and he deploys them to surreptitiously move between the antinomies of not just race and colonialism, but the whole mix of inherited legacies that swirl in the contemporary condition. 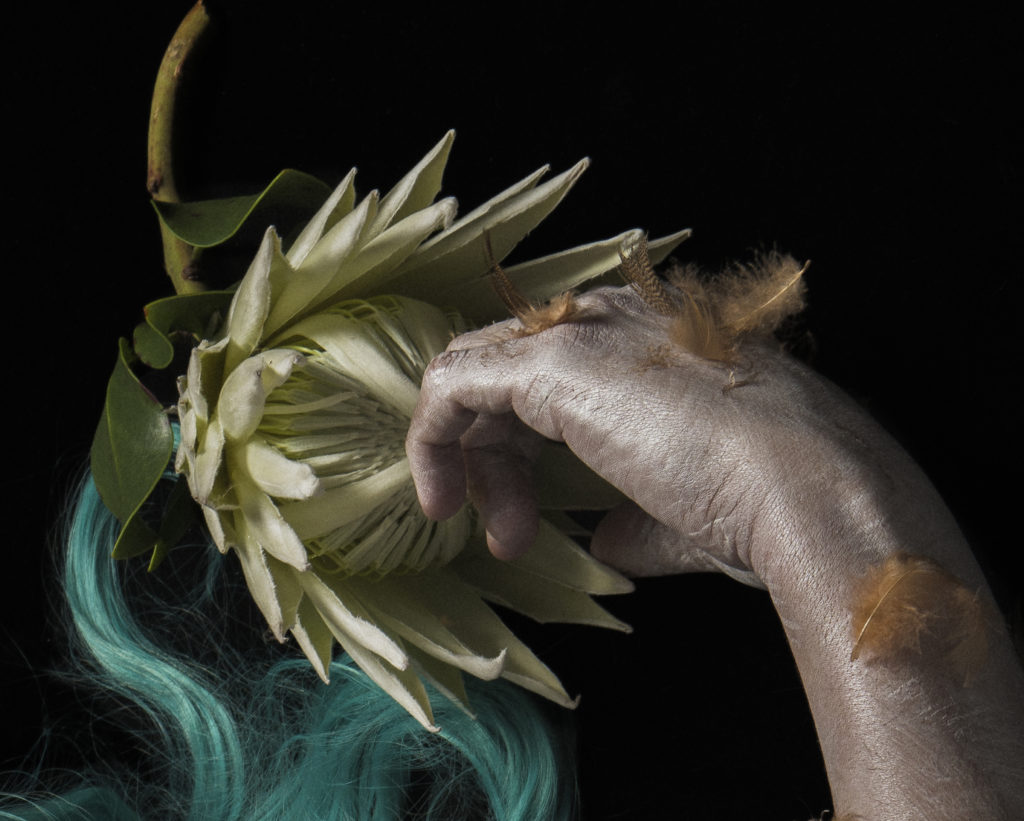 In taking us to our imagination, Thompson also leads us to the contemporary condition in which current imaginaries are nurtured.

Text extracted from a catalogue essay by Professor Ian McLean, the Hugh Ramsey Chair of Australian Art History at the University of Melbourne.

Images courtesy of the artist and Michael Reid Berlin.