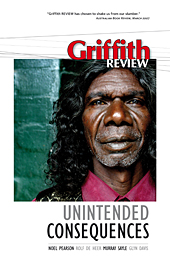 Unintended Consequences explores what happens when things don’t go according to plan – politically and personally.

It examines both the unplanned triumphs and the unexpected failures, with a particular focus on indigenous relations.

Forty years after the 1967 referendum recognised the first Australians as full citizens, Noel Pearson – Australia’s most innovative and effective Aboriginal leader – breaks new ground and eloquently advocates an agenda that learns from the mistakes of the past.

Some of the best writers and thinkers in Australia go beyond simple explanations and conspiracy theories to examine how unintended consequences shape our lives and our canon of heroes.

Murray Sayle considers how journalism can turn myths into reality, as he reflects for the first time on his chance encounters with Che Guevara in Cuba and the Bolivian jungle.

This collection moves from the big issues – war, bureaucracy, epidemics, planning and media – to compelling and quirky personal tales that reveal the long-term impact of small decisions. We are surrounded by unintended consequences.