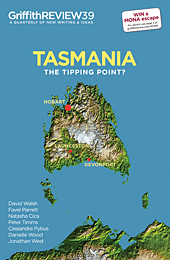 Tasmania ranks at or near the bottom among Australian states on virtually every indicator of socio-economic performance – including levels of employment, income, investment, education and health.

Where does Tasmania’s future lie? Has Tasmania reached a ‘tipping point’, politically, economically and culturally?

In TASMANIA – The Tipping Point? Griffith REVIEW serves up strategic slices of Tasmania’s past, present and future.

Thinkers, writers and doers from Tasmania and beyond, including members of its extensive diaspora, challenge how Tasmania is seen by outsiders and illuminate how Tasmanians see themselves, down home and in the wider world.