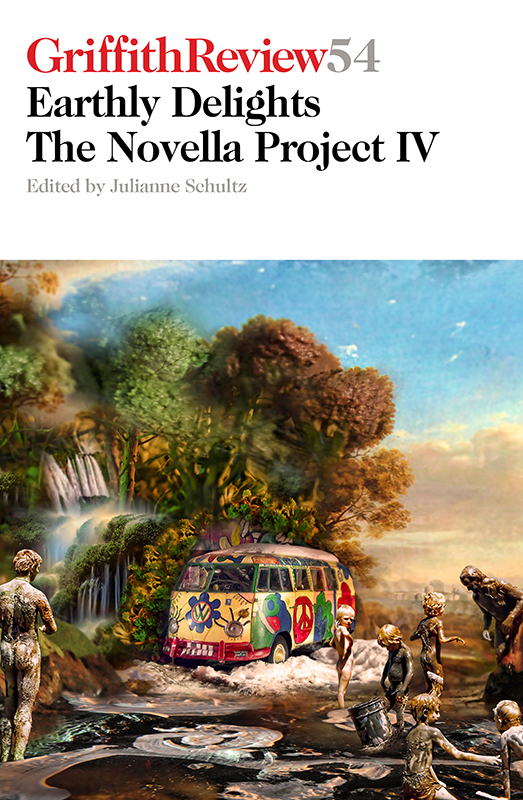 The judges of this year’s competition – Nick Earls, Aviva Tuffield and Sally Breen – were unanimous in their praise of the entries. ‘These pieces are a showcase for the strength of the novella form,’ said Nick Earls. ‘Each writer takes us deep into the inner workings of their characters.’ Aviva Tuffield commented. ‘I was impressed by the overall quality and by the range of themes, voices and styles on display.’

Numbed following the death of his wife, Evan finds himself reinvigorated when his daughter’s partner urges him to return to his long neglected talent for drawing. MELANIE CHENG follows the lonely old man’s fledgling efforts to reconnect with the world, but will Evan’s growing fascination with the nude model he sketches in life-drawing classes lead to disaster, or will it inspire him to heal what remains of his fractured family relationships?

Terminally ill Saul has exiled himself to the remote Australian interior in a final attempt to reconnect with his ancestral lands. GRAHAM LANG chronicles Saul’s decline, and his unlikely battle of wills with the landowner – an isolated and aged farmer clinging to his patch of territory in the far-flung isolation of the outback.

A newly arrived teacher at a college in the Middle East struggles to make sense of the studied silences that surround the fate of her American predecessor. DANIEL JENKINS explores the complexities of life as an ex-pat as Rachel investigates the whispers she hears about a fellow Australian teacher.

Claire is overjoyed to meet the adult son she gave up for adoption as an adolescent. However, the intensity of their first encounter upsets her hard-won equilibrium and, as the relationship develops, SUZANNE McCOURT examines how quickly the fragile certainties that have underpinned Claire’s adult life begin to erode.

In ‘Datsunland’, STEPHEN ORR focuses on William, a middle-aged teacher and failed rock star, who is fed up with his work, his lack of success and his inability to break through with his band of hopeless mediocrities. In his student Charlie, a talented 14-year-old guitarist, William spies a possibility of redemption – but can he overcome his almost nihilistic sense of detachment to forge a meaningful connection?

Alongside the five winners of the Griffith Review annual fiction competition, Earthly Delights also features ‘The White Experiment’, the final piece of fiction written by the recently deceased CORY TAYLOR.

Earthly Delights: The Novella Project IV is published with the support of the Copyright Agency’s Cultural Fund.