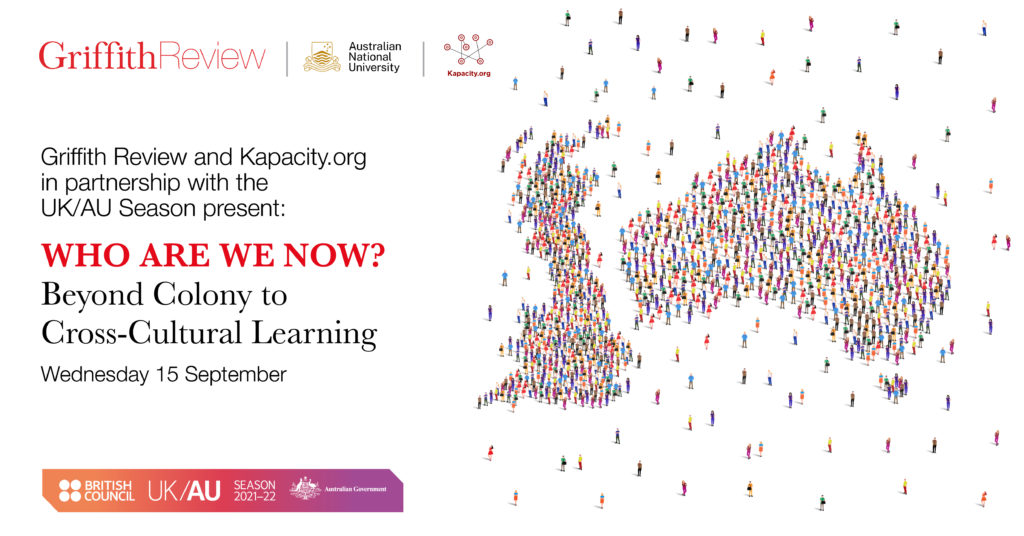 Join Griffith Review, Australia’s leading journal for new ideas and great writing, and Kapacity.org for a conversation exploring the contemporary relationship between the UK and Australia.

What are the challenges and opportunities for Australia and the UK around our shared colonial legacy? How can we generate cross-cultural learnings?

Facilitated by Natasha Cica of Kapacity.org, co-editor of Griffith Review 69: The European Exchange and featuring an exciting panel of cultural and academic leaders, this UK/AU Season event explores questions raised in The European Exchange – one of The Weekend Australian’s best reads of 2020. In our COVID-conscious times, this discussion could not be more relevant to the evolving and dynamic exchange between Australia and the UK.

Dr Natasha Cica is director of consultancy Kapacity.org. She is a former CEO of Heide Museum of Modern Art, and established the Inglis Clark Centre at the University of Tasmania. Natasha has been recognised by The Australian Financial Review as one of Australia’s 100 Women of Influence and was an inaugural Sidney Myer Creative Fellow.

Professor Carolyn Evans has been Vice Chancellor and President of Griffith University since 2019. Before this, she was Deputy Vice-Chancellor (Graduate and International) and Deputy Provost (2017-2018), and Dean, Law (2011-2017) at Melbourne University. A Rhodes Scholar who completed her doctorate at Oxford and a Fulbright Scholar, Professor Evans is an internationally recognised expert on religious freedom and the relationship between law and religion. In 2019 she was elected as a Fellow of the Academy of the Social Sciences in Australia, became Chair of the Innovative Research Universities Group and a member of the organisation, Chief Executive Women.

Cathy Hunt is a cultural strategist, Executive Producer of WOW Australia, and Executive Director of cultural enterprise Of One Mind. As co-founder and director of consultancy Positive Solutions, she has worked across Australia, Hong Kong, New Zealand and the UK. Cathy is a board member of Screen Queensland, on the advisory board of the Unus Centre for Social Business at Griffith University, and is Executive in Residence in the Griffith Business School.

Professor Stuart Ward is an expert in British Imperial history and head of department at the Saxo Institute at the University of Copenhagen. His research deals with the political, cultural and economic dimensions of global decolonisation since World War II, and the historical legacies of imperialism in contemporary Britain. Originally from Australia – with degrees from the University of Queensland and the University of Sydney – he has previously held posts at the European University Institute, King’s College London, the University of Southern Denmark and University College Dublin.

Now, more than ever, Australia’s writers
need readers for their work