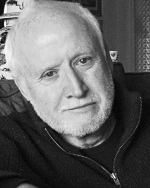 Phillip Siggins was a junior academic, teacher and university administrator. At Monash he completed an M.A under the supervision of the distinguished biographer Brenda Niall.

This led to a sojourn in America on a travelling scholarship, tutoring in the Monash English Department and later the opportunity to give some lectures in the American literature course. Whilst Phillip enjoyed these academic pursuits he did not feel he had found his vocation. He embarked on a career in university administration that occupied the next thirty years.

Phillip's love of literature however was ongoing and during the 1990s he contributed critical articles for the weekend Herald Sun and book reviews for the Australian Book Review.

'Following major surgery on both his brain and his heart in 2007 and 2009 Phillip resolved to write creatively rather than critically. Some early successes ( publication of 'The Morning Aunt' in Griffith REVIEW 26 and 'Returned' in Island, Spring 2010) have encouraged him to attempt a collection of short stories and a novel based on a stint as a carer for the elderly in the City of Richmond.