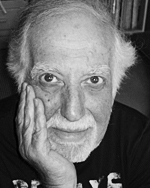 Morris Lurie is the author of some three dozen books, for adults and children.

They include Flying Home (Outback Press, 1978), selected by the national Book Council as one of the ten best books of its decade, The Twenty-Seventh Annual African Hippopotamus Race (Collins, London and Simon and Schuster, New York, 1969), winner of the inaugural YABBA Award as voted by the schoolchildren of Victoria, and his Banjo-winning autobiography, Whole Life (McPhee Gribble, 1987).

He received the Patrick White Award in 2006.

Mr Lurie was a favorite of Griffith Review not least because of the way he reached across the generations.  Younger members of our team grew up reading his children’s books in the 1980s, the most fondly remembered of which was The Twenty-Seventh Annual African Hippopotamus Race (Penguin, 1986), a book they are now sharing with their children.

Mr Lurie was part of a generation of creative Australians who emerged after World War II and made a mark we are still indebted to. He started his career in advertising and was closely associated with other literary greats including Peter Carey and Barry Oakley.

He wrote more than thirty works of fiction, his second novel Flying Home (Outback Press, 1978) was named one of the ten best Australian books of the decade by the National Book Council. In 2006 he received the Patrick White Award for his contribution to Australian literature.

‘Morris’s enthusiasm and eagerness to explore ideas, to welcome newcomers and to push the limits of what could be done with words on a page were an inspiration,’ said Griffith Review editor Julianne Schultz.

‘I am sure there will be many tributes from around the world and I hope they note his wicked eye and wit as well as his way with words, because he could be as tender as he was funny. ‘Homeopathy’ was a perfect little example of this talent.’