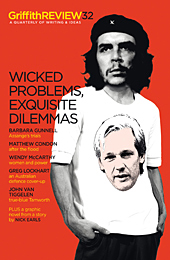 He bought or subscribed to a magazine he freely acknowledged was of at best passing or peripheral interest – society gossip, largely, such as I could gather – but with a puzzle on its inner back page he adored.

No other word for it, I'm afraid.

We inhabited together a section of partitioned alcove forty business hours a week.

As I knew too to leave him alone that day with his magazine.

'It's my one pleasure,' he excused his gruffness.

On Thursdays I ate my sandwich in the park.

Unless it was raining.

I left him alone.

Do you do crosswords? Neither do I. I don't have the interest, the aptitude, I don't know what you'd call it. The need, I suppose. Oh, stuck on a plane I might find myself reaching for my rollerball and filling in a word or two, but the answers are either so easy I feel childish or else I'm irritated not knowing so I turn to the answer on the next page and that's the end of that.

I have other avenues for my intelligence.

OUR WORK IS is telephoning.

It's not difficult. What we say is written out for us.

What else can I tell you?

I took my sandwich.

And when I came back Philip had finished his crossword, as he always did, unobserved, as he required it, left alone, but this time he spoke.

'They've made a mistake,' he said.

'The answer to last week,' he said.

He glared at me.

No other word for it, I'm afraid.

'They've printed the wrong one.'

I WENT HOME when it was time to go home.

Philip went to wherever he went.

My telephone is on the kitchen wall. I sleep naked.

HE WAS WAITING for me with both magazines.

I wasn't even out of my coat.

'One across.' He pointed. 'Hero's antagonist. I put villain. They've got badster. Then one down, using my v, the clue is repository for flowers. Vase. They've got bowl.'

'Nineteen across,' he said.

'Fourteen down,' he said. 'Where I've got Dutch uncle.'

'Thirty-six across,' he said.

'Triangular plate on arm of anchor,' he read me the clue.

'WRITE TO THE magazine,' I said.

We should have been telephoning.

'The Guinness Book of Records,' I said.

It was time to be telephoning.

I took my sandwich.

And when I came back Philip still sat with his pencil still in his hand, the magazine open to the appropriate page on the surface of work table in front of him, the squares of the adored crossword entirely untouched, not a single space filled, virgin and immaculate, completely unmarked.

He looked at me.

He wouldn't look at me.

'What if it happens again?'

'Shade from the sun,' he said.

'A picture for the afternoon painter,' he said.

'A fecund factory for the formulation of fruits,' he said.

'A cold man will carve it one way, a cabinetmaker another,' he said.

I TOOK MY sandwich.

This was a Tuesday.

I asked why he still bought it.

I suggested he not buy it.

He looked at me.

The magazine waited on his work table.

He had no words.

We stood at the corner.

And stepped out, dead before you could even utter the word, directly into an oncoming truck.

He must have seen the light as green.

TRUTH IS AS truth believes. When the piano needed tuning and the blind piano tuner came to the house, and sat down, and tuned the piano, and when he’d finished was given a cup of tea (in a plain glass cup on a plain glass saucer) and a piece of cake (on a plain glass... Read more