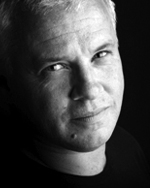 Matthew Condon is the author of ten novels and story collections, including A Night at the Pink Poodle, winner of the Steele Rudd Award for Short Fiction.  Condon has written for the Sydney Morning Herald, The Sunday Age and other leading newspapers, magazines and journals.

In Japan, Condon conducted in-depth research for a novel based on the life of the controversial Australian journalist Wilfred Burchett.  Burchett was the first western journalist to go into Hiroshima after the atomic bomb was dropped and file a first-hand report on the devastation.  Condon’s novel will hinge on Burchett’s journey into Hiroshima, his quest for the truth and his at times ‘skewed political fanaticism’.

Of the bomb
Edition 9: Up North

The knife meets the whetstone
Edition 5: Addicted to Celebrity