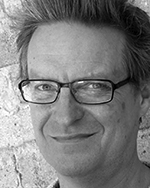 Larry Buttrose is the author of several books of non-fiction, as well as poetry, travel, and novels. He has written extensively about travels in Asia.

His second novel Sweet Sentence (2001) was set in India, in the former French colony of Pondicherry. He has recently completed a new novel, and is working on another for a PhD in creative writing. His most recent book is the non-fiction Dead Famous: deaths of the famous and famous deaths (2007), examining deaths as far back as those of Egyptian rulers Akhenaten and Cleopatra, up to those of Anna Nicole Smith and Bob Woolmer in 2007.

His latest book is From Eden to El Dorado: Tales of the Popes published in early 2009 by New Holland.

He lives in Leura in the Blue Mountains outside of Sydney.