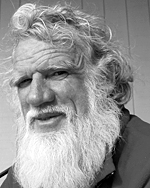 Bruce Pascoe is of Bunurong and Yuin heritage and a member of the Wathaurong Aboriginal Co-operative of southern Victoria.

He has worked as a teacher, farmer, fisherman and an Aboriginal language researcher, and was the director of the Australian Studies Project for the Commonwealth Schools Commission. His publications include Fog a Dox (Magabala Books, 2012), which won the 2013 Prime Minister’s Literary Awards (Young Adult), and Dark Emu (Magabala Books, 2014), which won Book of the Year and the Indigenous Writer’s Prize in the 2016 NSW Premier’s Literary Awards. He was awarded the Australia Council for the Arts Award for Lifetime Achievement in Literature in 2018. His most recent book, co-written with Vicky Shukuroglou, is Loving Country: A Guide to Sacred Australia (Hardie Grant).

Big Yengo
Edition 42: Once Upon a Time in Oz

Andrew Bolt’s disappointment
Edition 36: What Is Australia For?