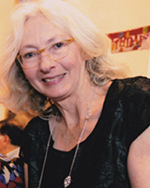 Anne Coombs has been a journalist, author, social activist and philanthropist. She is the author of five books, including Sex and Anarchy: The life and death of the Sydney Push (Viking, 1996) and Broometime (Hodder Headline, 2001), co-authored with Susan Varga.

Anne was one of the founders of Rural Australians for Refugees, and is a past board member and chair of GetUp!. From 2004 to 2014, she was executive director of the Becher Foundation, a private foundation with particular interest in supporting refugees and asylum seekers, regional communities and indigenous education. She has recently completed a feature film script set in Australia’s far north.

The limits of 'new power'
Edition 51: Fixing the System