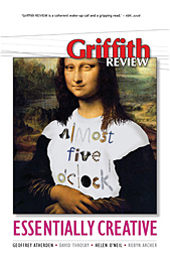 FOR THREE DAYS straight, Anna had stayed inside, limbs aching, senses dulled. She'd heard Tom come and go – mainly go. She lay on the bed, watching the fan slowly spin above her. The fever had gone. She felt drained but light. Hungry. Downstairs in the kitchen, Anna made herself toast and coffee. It was Saturday. She had a 10 am appointment. Harry. On the table in front of her sat a jar of preserved lemons, packed tightly in salt. It was 8.30 am by the clock on the oven. She knew things were coming to an end.

Tom wasn't sure why he'd followed Anna to Fremantle. They'd met in Kalgoorlie and lived there in an old miner's cottage on a wide street one back from the row of brothels in gaudy Hay Street. It was a fine life – endless, disused tracks to explore by car, frosty winter mornings, a rawness you couldn't find on the coast. Tom had never told her about his vasectomy. He'd had it done before he knew her. He'd agreed with her that children were a blessing, been attentive in the bedroom, encouraged her to become an art therapist. Tom had done what he could.

WITH HER NOTEBOOK and props arranged beside her on the upstairs balcony, waiting for Harry, Anna thought again of the last conversation she'd had with Tom before she fell ill.

Tom had come home late from work. Harry's drawings were on the kitchen table. She saw Tom looking at one of them – always the same one: Harry flying above the rooftops of the houses outside their balcony window.

‘What would be the magic power you'd most like to have?' Anna asked, and as she did so realised he'd answer as a patient answers his therapist.

Tom hesitated, and she could see how her question drew him out of his dreaminess, made him instantly defensive as if, although she could fuck him as much as she wanted, she wasn't entitled to ask anything so personal.

‘To be invisible,' he said at last, keeping his eyes on the picture.

‘All the time?' Anna asked.

HARRY KNEELED ON the verandah, a sheet of paper easeled in front of him, a row of watercolour pencils in a neat rainbow at his side. He loved this place, this upstairs veranda perched high on the hill overlooking Fremantle.

Harry ignored her, feeling the blue pigment crush under his finger as he rubbed pencil on paper to make sky. Anna took a sip of water and looked at Harry. Thin legs, small-boy shorts, black curls against a bright red t-shirt. She knew she should be trying to engage him, to find new ways to bring him out of himself. After all, it was what his parents were paying her to do. But this was clearly what he loved. Sitting above the world, drawing himself into it.

She sat cross-legged on the veranda, breathing in the smell of the jasmine entwining its rails. And they'd made real progress. Months had passed since she'd had to hold Harry to her, rubbing his back and his thin shoulders, as a tantrum subsided. The little alarm clock beside her rang loudly. Harry put his hands over his ears until Anna turned it off. He started to pack away the crayons, being careful to put each one away in the rainbow order in which they had come. Anna pointed to the picture he'd just drawn – to his hair swept back by the air rushing past him as he flew.

‘That shows you're moving,' said Harry, careful not to look at her.

TOM PULLED OUT into the traffic on the stirling highway, glad to be on his way home. He hated doing house maintenance, hated it even more for the $18 an hour it gave him. At times he felt as if he were the only person in the west earning less than $100,000 a year. Living in Fremantle, earning this sort of money, it couldn't last. In six months he'd gone through most of his savings, knew it was probably the same for Anna. In another six months he'd be in debt. He thought of going back to Kal, working on the mines for a year or two. He'd come back and put down some money on a simple two-bedroom house, as close to Freo as money would allow. The car in front slowed then turned left without indicating and he gave it a long blast with his horn.

Anna poured herself another coffee and took it out to their tiny backyard, separated from the others like it on both sides by an untidy brush fence. The young mother next door had laid on morning tea for her playgroup. Anna sat down, waiting for Tom to come home. She could hear the hungry squawking of a newborn, chatter from the new mothers.

‘Sunlight is a natural disinfectant,' she heard someone say, and she thought of the lemons on the kitchen table. She felt good, strong. The sickness nearly gone from her body, she felt on the verge of being well, and the feeling was somehow better than wellness itself.

They both went upstairs when Tom came home. The old game – the give and take of sex. Afterwards, the room full of the smell of jasmine, they both fell asleep.

Anna woke just before sunset. She pulled on some clothes and walked out into the street. Below her was the crazy, cramped roofscape of Fremantle. She started walking, the last rays of sunlight on her face, the breeze off the ocean making streamers of her hair.

The colour of kerosene

IT HAD FELT wrong from the moment he’d picked up the fare outside the hotel on Marine Terrace.

They drove on, almost to the end of Rifle Range Road. ‘That’s the one,’ said the man, pointing to a weatherboard Housing Commission home with a dying wattle tree out the front.