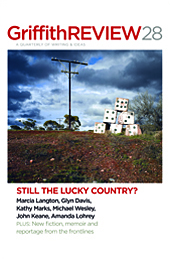 K: Kumanjayi, word that substitutes for a name that can't be spoken

WHEN K RANG the station to see if they needed her to bring anything, the manager said, ‘Yeah, good, can you pick up a couple of cartons of bread and two packets of .22 Magnum bullets. The TOs have used all my bullets shooting bush tucker. And, yeah,' he said, ‘that old Jakamarra says he's going to shoot you when you get here.'

‘Why would he want to do that?'

‘He's got some idea in his head that you're coming back with a company to take his country away from him.'

‘Where did he get that idea from?'

‘You know these fellas – someone gets in their ear and winds them up. I told him it was just you coming out to do stories with them. But the old man's adamant. I'll shoot that woman when she gets here, he reckons.'

‘As a matter of interest,' K asked the manager, ‘if they've used all the bullets, what's he going to shoot me with?'

‘Probably one of them you're bringing with you, unless he's saved one specially.'

K told him no one was getting any bullets, or bread either, until they'd convinced the old man she was no threat to him or his country.

The old man belonged to a family line she'd not had much to do with, though he'd been present the previous year when they had all discussed the project to record as much surviving traditional knowledge as possible through map-making and oral histories and stories.

The confusion about maps and stories stems from the association with land claimants and royalties accruing from the gold mines in the region. Every year when the royalties are handed out a feeding frenzy ensues, with endless arguments over who is or is not entitled by birth or tenure to claim traditional ownership to the gold-bearing quartzite ridges of the region. Light-skinned distant relatives turn up and are welcomed with open arms, until their claim of kinship entitles them to a chunk of royalty money, when relations turn sour and they beat a retreat with their booty.

K might well turn out to be one of these, given her childhood connection to the country, and the old man was taking no chances. His threat was not to be shrugged off. When he was little more than a boy he had murdered his brother with an axe.

EVERY YEAR SHE comes back; every year the questions resurface about why she does it; every year the first encounter with the light and colour of the desert presents her anew with the astonishing reach of the sky, the symmetries of termite mounds and spinifex, the subtlety that to the untrained eye looks like sameness, that is in fact a country on which the ancient story is written close to the surface.

Why does she come back? Guilt has never troubled her: it has always seemed rather useless. But she has always felt implicated in the Aboriginal story; she can't make sense of her country without its Aboriginal heart, which is neither as simple nor as welcoming as one might wish. Through some accident of association this part of Australia has come to represent something very particular for her. A little to the north is the Aboriginal community to which in the 1950s a young mother took her newborn daughter and joined her husband on what was then one of the remotest places on the continent. Maybe those first years of the child's life wired up the circuits of her brain in a way that left her half-tuned to a world that was always on the brink of audibility, its static interfering with her capacity to give her full attention to the world that she was by skin colour and education destined to inhabit.

Or maybe this is a romantic notion to make sense of the radical instability of her life in middle age, when the static is no longer the secret voice of the country but tinnitus, made more insistent in the night silences of the desert, though there have been nights when the chirrups and hums she thought were the product of her inner ear have proven to be the busy nocturnal conversations of scuttling, creeping desert creatures going about their business.

THE OLD MAN was duly placated, and K travelled with him and his family out to a part of the country where he'd walked as a boy, before he came into the mines and had his first encounter with white people. He was in pain, and grumpy, and continued to refer to K as ‘that woman'. She was merely a vehicle to drive him back to his country and give him the opportunity to sing some of the songs he'd been taught, and to claim emphatically as his own a section of the sacred dreaming track that intersected with what K later learned was a possible site for a new gold mine. He had a young wife who kept him hopping. She was a tall, glossy, confident girl, and expensive to keep.  The old man was short and froglike, with a vast mushroom of a nose that oozed sebum from its enlarged pores, and she had run away from him several times. He had hunted her down on each occasion with the connivance of her family, who did not want to lose access to his royalty money.

She wasn't impressed with the discomfort of the slow drive through the almost impenetrable wattle and over broken sandstone rubble; she wanted to be back home in the community, watching DVDs and hanging out with friends of her own age.

An account of the old man's early life records the way his people lived in the desert, and it is filled with a hard sexual jealousy that kept the young unmarried men segregated from the married couples and treated as potential predators.

K felt sorry for the old man, and there were moments when he spoke and sang of his country that were very moving. There was a rock hole he remembered, but it wasn't quite where he thought it was, and his pain and exhaustion defeated him. A wattle stake punctured a tyre on the vehicle, and while K changed it the old man and his young wife sat passive and indifferent in the fine winter sunlight. Later, when he had recovered, they sat by the freshwater claypan that marked the northern boundary of his track and K recorded his reedy voice reiterating his claim to that piece of country.

‘Mine!' he said over and over. ‘Only mine, and that other one Jakamarra. We two for this country, that's all.' He listed all the names of people who might dispute his claim, or make their own bid, and outlined the evidence against them. ‘That old man Mosquito, father for that mob, he sat down here only once. That's a liar story they telling for this country.'

‘When I was young boy anybody stranger came into our country we spear 'em, same like kangaroo.' He sounded regretful that things had changed.

Lost and found in translation

The vast continent is really void of speech…this speechless, aimless solitariness was in the air. It was natural to the country. DH Lawrence, Kangaroo

UNLIKE MANY CITY-DWELLING Australians, the desert holds no terrors for me. Instead, like DH Lawrence, I find the cathedral forests of the coastal regions oppressive and disquieting. Lawrence brought to his... Read more