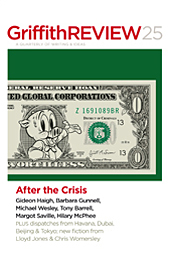 THE IDEA OF globalisation never enjoyed popular support in developed nations and for that reason it will probably become another casualty of the global financial crisis.

Even now, just two years after falling sub-prime values began melting through the tenets of free-market capitalism, the concept of a world united by the needs of business appears as far-fetched as a world where workers call all of the shots.

Fittingly, globalisation's growth as an ideology accelerated after the end of the Cold War. Calls by bankers and politicians to deregulate industries, remove competitive barriers and relax immigration restrictions grew louder after the fall of the Berlin Wall. With no viable ideological rival, the idea of globali-sation spread quickly into the absence of a narrative left by the Cold War's conclusion.

As rapidly as it might have been embraced by the world's elites, globalisation has enjoyed only an ambivalent acceptance by middle-class populations who stood to lose the most. And why does the middle class's opinion matter? Because it is the widest segment of people who are free to vote their conscience. That freedom gives their economic choices more credibility.

Few middle class citizens would want their nations to link their economic destiny with the fate of far-off countries at vastly different stages of development. Who would invite the untold risk of unlimited competition into their job market, subjecting their livelihoods and their standards of living to such an unpredictable force?

There was never any guarantee beyond the trickle down theory that wealth would be passed along. Even before the financial crisis it was clear that the true beneficiaries of global integration and the rush for deregulation were the companies. Economists in the developed world need only have a few conversations with the legions of service sector counter help, asking them how much they earn and how much their education, housing or healthcare cost them to see how untenable the economy had grown.

Hard work was rewarded with lay-offs. The surreal salaries of CEOs defied the imaginations of workers, a few years ago prompting organising unions in the US to publicise the yawning earnings gap to workers left far below on the wage scale.

Members of the once economically secure and politically stable middle class grew doubtful about their future, even as the forces of marketing told them they never had it better.

So globalisation's hold upon the imagination of the world's middle classes is tenuous at best. It took the financial meltdown to lay bare how wobbly the assumptions of the ideology were. It's hard to find a people in the world willing to set aside their economic interest for the kind of prosperity envisioned by elites over the last two decades, a time of greater inequality within the developed and developing worlds. Now the most strident voices decrying the spectre of protectionism are politicians and economists warning that trade barriers and rising tariffs will hurt all nations by slowing global growth.

LOOKING BACK OVER the end of the Cold War, it's easy to see how communism was doomed by external forces it could never control. Matters as small as western fashion and pop culture could distract and seduce citizens of the Eastern Bloc with more subtlety and force than any counterinsurgency effort.

Likewise, only a year since the scope of the global financial crisis has come into view, the shelf-life of the globalisation narrative appears to be ticking down. One of its biggest fallacies is the notion that place doesn't matter. Witness the popularity of Thomas Friedman's view that technology has rendered place irrelevant in the affairs of the world. On a balance sheet, Friedman is exactly right; products, labour and profits can be bought and sold easily from anywhere. On a human level, the placelessness of the globalised world has become a source of profound distress.

Even if people can be in constant, immediate communication with the world, the atomised existence Friedman celebrates can be dislocating and alienating. Certainly, it is as uncomfortable as holding the line for an indeterminate amount of time while waiting for a person with an inscrutable accent, located in an unnamed place, to deal unsatisfactorily with a customer service problem. To accept this as progress, globalisation demands the denial of a simple truth: People want to pertain to their world.

As dogma played a key role in the advance of communism, public relations was the best tool available for promoting globalisation. For that reason, it's arguable that ‘globalisation' is little more than a catchword conveying an optimism about the future of the world reorganised around the needs of business.

The language of the ideology, advanced by baby boomers, borrowed from the revolutionary fervor of the 1960s. In practice, globalisation demands an almost child-like faith that greed and consumption were benign and the details of world peace and prosperity would work themselves out. How else to explain the belief that the transfer of manufacturing jobs into the developing world was an effort to spread prosperity? As if justice and not cheap labour was the motivation of multinational corporations.

Just as the world settled into a generations-long division of allegiance and identity through its Cold War partition, a new stasis will inevitably emerge. The question now is what will it look like? What will supplant globalisation as an overarching idea for the peoples of the world?

THE IDEA OF sustainability has been embraced by corporate media relations departments and environmentalists alike. Cities need to be designed and managed so their citizens can move easily, breathe clean air, access alternative transportation and maintain a high quality of life. Businesses, staring at the apocalypse of the crisis, have to operate with longer term goals rather than quarterly profits. It will be interesting to see if businesses' current fascination with the idea extends beyond a few key phrases embedded in annual reports.

Ultimately, sustainability depends on the support of the world's middle classes, and whether their support runs deeper than the resigned indifference shown towards globalisation.

A renaissance in localism – the movement for communities to reassert control over governance, food, media, environmental protection and civic development – will offer a sense of power and identity to citizens around the world. Championing what is unique and distinct in a single place combats the fear among people that they are only a small part of a global economy that they can neither influence nor comprehend.

Democracy, always messy in practice, has enjoyed a small renaissance lately. Citizens worldwide can thank George W Bush for bringing South American-style politics to the US and igniting what may well be a generational response from the left in America.

But it is proving to be a mild counter-revolution, heralding a moderate tone after baby boomer politics pushed ideological battles into a fruitless, damaging state of gridlock.

The same generation responsible for the New Left of the 1960s, brought the world the conservative movement and the rise of the politically active evangelicals in the 1990s. John Howard's long tenure in office was helped by the mainstreaming and harnessing of a xenophobic urge personified by Pauline Hanson. Even the rise of the Taliban and its millennial effort to radicalise Islam are a product of the age. Politically, the baby boomers have always veered towards the extreme.

In the Arab world, a small middle-class has one foot in the west, with its bottomless drive for possessions, while casting a romantic eye towards Islam's desire for the sacred in the world. The disequilibrium between the west's commerce and the Middle East's religion gives a glimpse of the fundamental imbalance aggravated by history's drift in the past twenty years.

Yet the human desire for balance in the world is innate and it would be a mistake to think the hunger for the sacred is exclusive to the Middle East. The rhetoric surrounding the election of Barack Obama to the US presidency underscored a secular search for ideals to enshrine in the west after decades of material pursuits and reactionary religion.

Whether in rhetoric or action, there will be a need to affirm that the value in work, in life, and in the world transcends price. That has always been the missing component of globalisation.

Whatever idea emerges to supplant the globalisation narrative, it will likely carry an element of idealism necessary for people to feel meaning in the world. Environmentalism, sustainability, democracy, and localism all speak to a need for a valuing of the world that addresses not just the wallet but, to some degree, the soul. Any of these ideas will likely be imperfectly carried forward, in half-measures, coalescing into a theme that defines the years ahead.