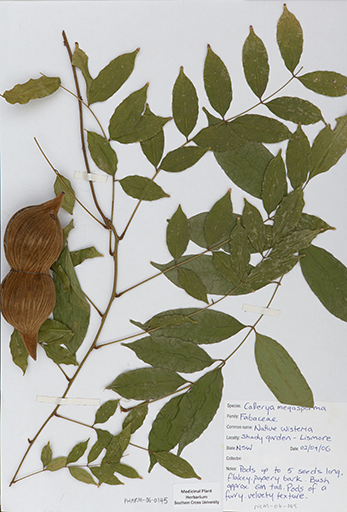 Australian-style mimesis is native daphne, frangipani, gardenia, violet … Is Callerya megasperma, native wisteria. Is the megasperma, the big dual seed pod, mimicking a long-sharp-nosed, small, bush animal, or the pointy-beaked head of a baby bird. Either could be co-joined twins, one at the buttocks, the other the neck. The pod could be velvet; could be velvet corduroy, tanned brown; could be less velvet, more fur. The sheen could be captured light and heat. Could be the orange granular stripes in the blaze which could be light but is the coloured texture of the inside of a vertical cut in a longitudinal section of bark. Could be the little seed-teeth tuck-out of the points of the pod. The beak could be tiny toes in the wrong place, buck baby teeth or fingers holding onto stem/feet to keep the leaf bracket attached. The leaves could be imitating oriental wisteria, lengthy thinness in could-be-spirited green, a memory of an imagined Robin Hood; their flapping could be fins in breeze-water leaving the branch visible. Could be leaves not-leaving. Could be mildly crinkled, lightly frilled. Could be smooth-stemmed, except for the join where the leaf stem comes off; could be open cover: an open bracket, a joint around the join(t), copying itself. Is climbing. Is food for the caterpillars of the pencilled and narrow-banded awl butterflies, the rare Richmond Birdwing Butterfly. I could see native wisteria. Could recognise it. Could plant it. Could be hard to resist as oriental wisteria is.

‘These forests are noisy. You feel enveloped in sound. Buzzes, clicks, whistles, screeches and whoops. Sound peaks at the day’s margins: the dawn and dusk choruses.’

In this interactive essay for Griffith Review 63: Writing the Country, Eddie Game of The Nature Conservancy explains how scientists can evaluate the health of an environment by measuring the... Read more

THIS IS A singular history of drinking – within one Costello family of Irish, French, Spanish and/or Italian ancestry, all of whom have associations with alcohol.

But our first drink every day was warm water with freshly squeezed lemon juice. It was our father Frank’s legacy, as are most, if not all, of our drinking habits.... Read more