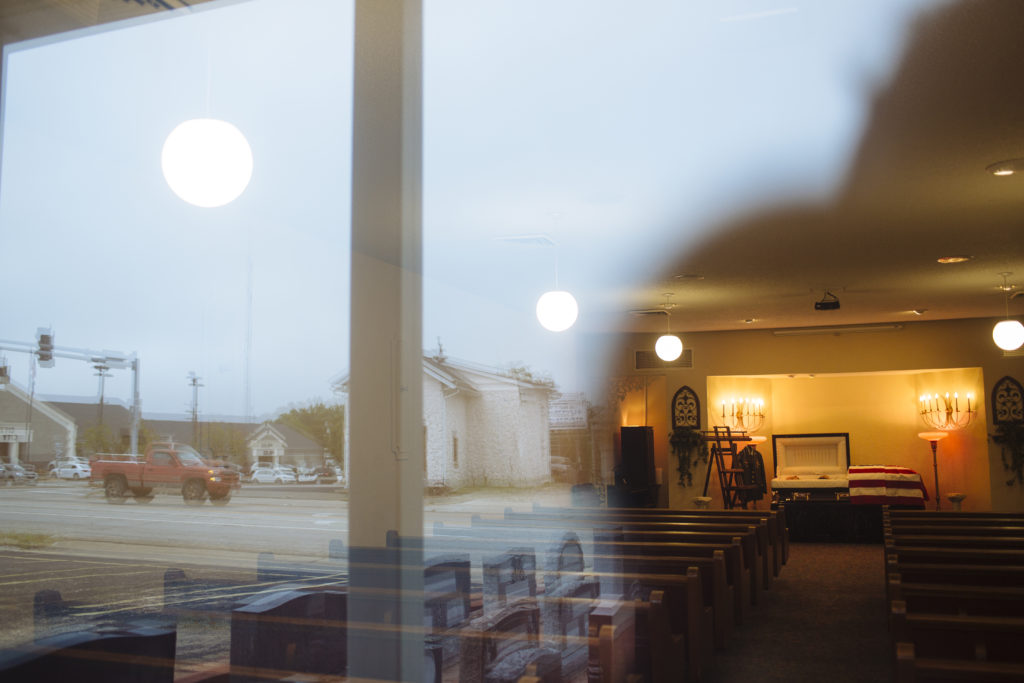 The body of Raleigh May, sixty-seven, lies in an open casket in the chapel of the Craig-Hurtt Funeral Home on North Main Street in Mountain Grove, Missouri, United States in September 2018. Raleigh was a Vietnam veteran who received multiple service accolades, including an Army Commendation Medal and a Bronze Star Medal. 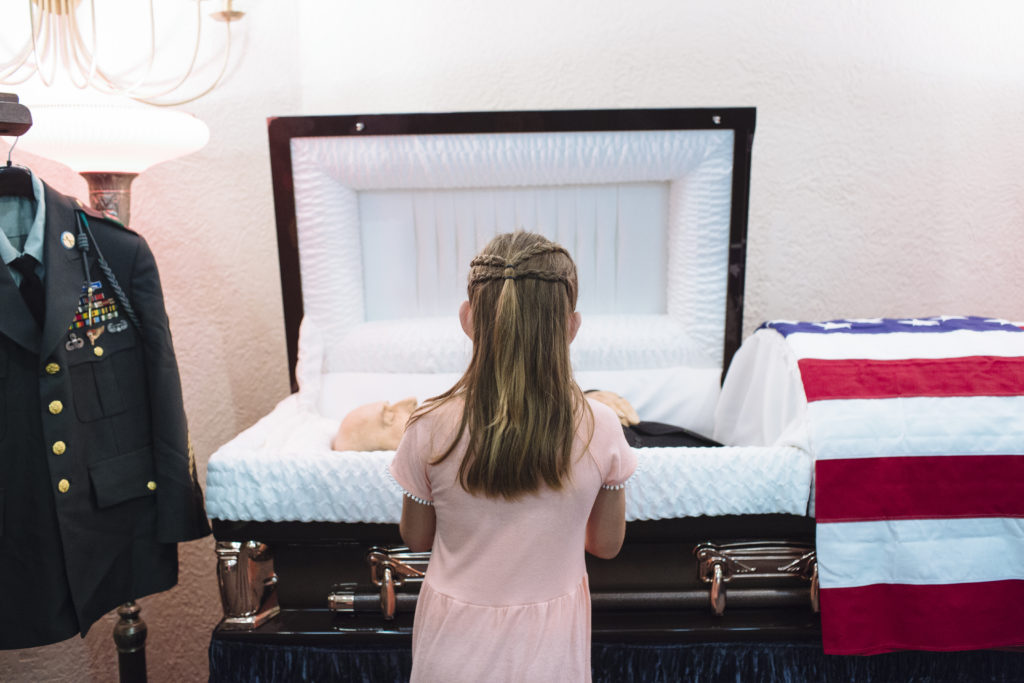 Raeleigh Mae Guzman, nine, stands over the open casket of her maternal great-grandfather and namesake, Raleigh May. He was her best friend and hero.

‘The sun rose and set on that little girl,’ said Raeleigh’s mother, Ninfa Guzman, twenty-seven. ‘He would never tell anyone, but she was his favourite.’ 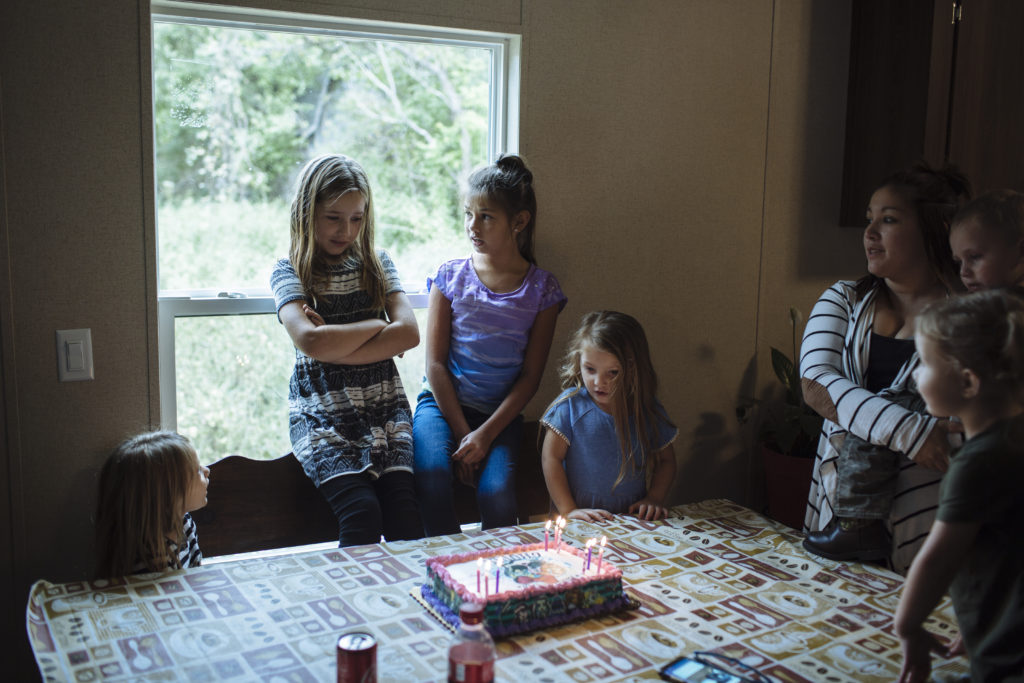 Raeleigh on her ninth birthday, surrounded by fellow great-grandchildren and other extended family members who were in town for the funeral. Raeleigh's family did not make formal birthday plans because her great-grandfather was gravely ill. He passed away three days before her birthday, resulting in a bittersweet celebration. 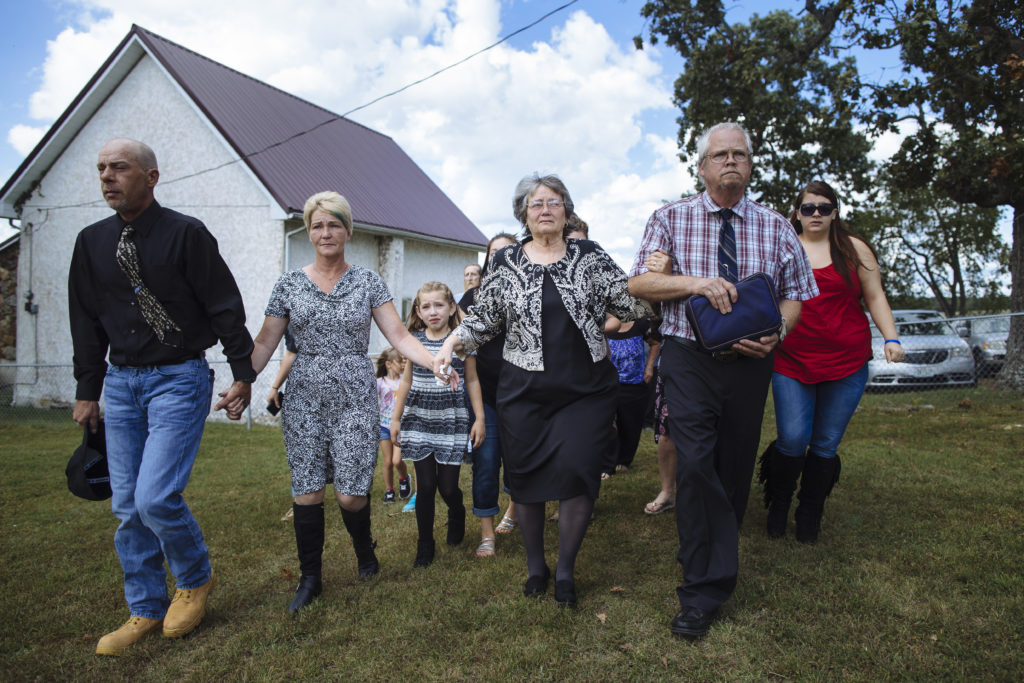 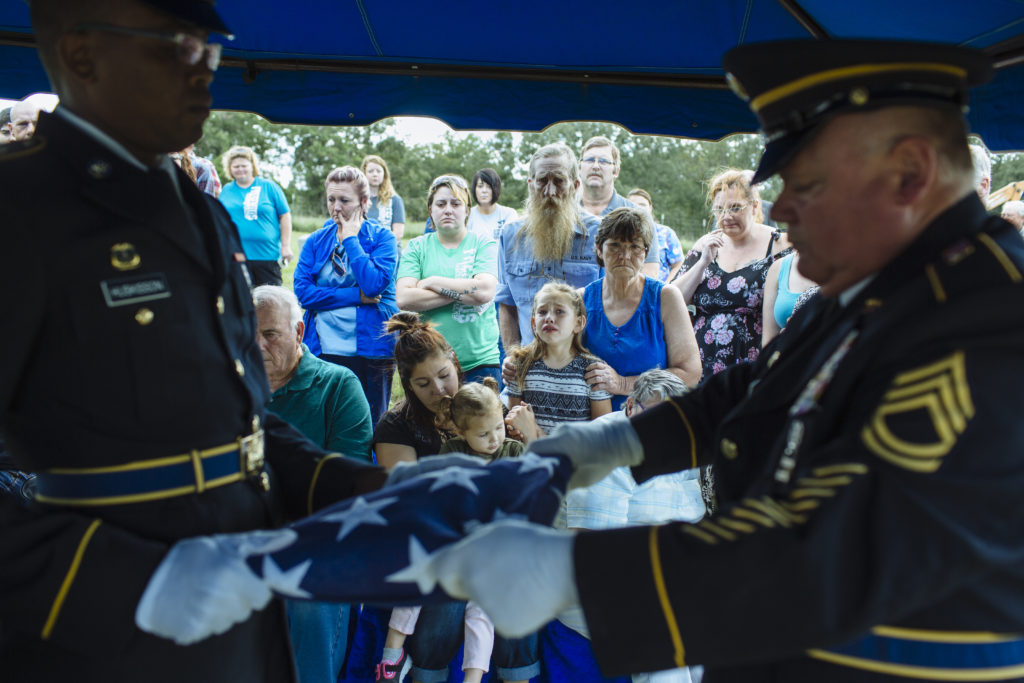 Raleigh May was buried with full military honours on Tuesday, 25 September 2018. The funeral took place behind the family’s church, one mile down an unpaved road from the property where Raleigh lived with his wife, Patsy, since they moved to Missouri in April 1990. 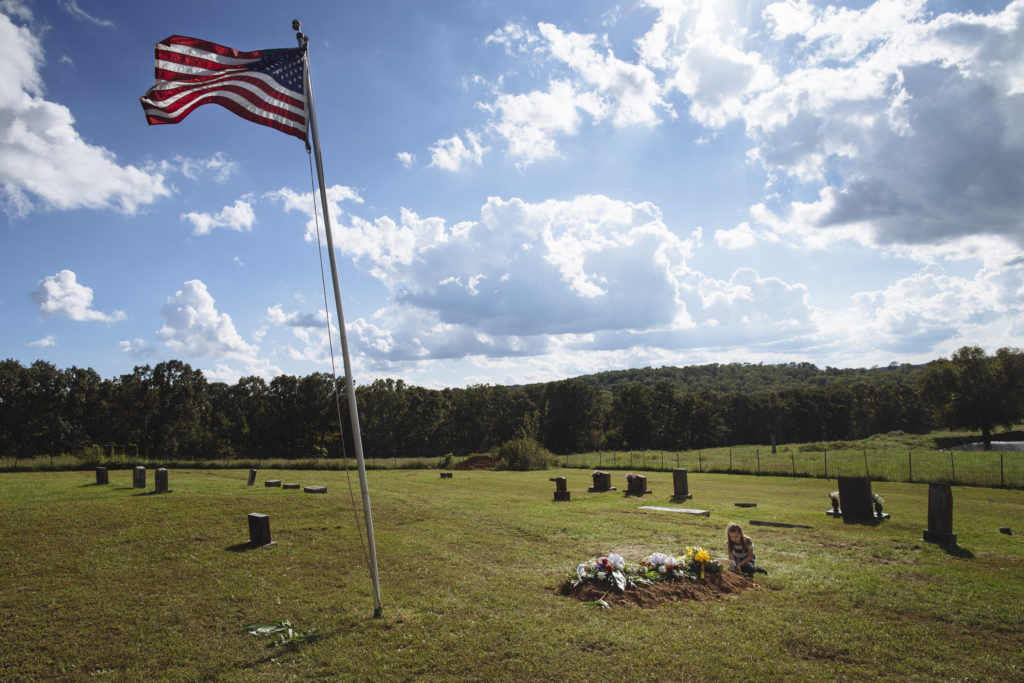 Raeleigh kneels at her great-grandfather's gravesite immediately after the burial service. Following the funeral, Raeleigh asked her mother if she could dig Raleigh back up so she could spend more time with him. 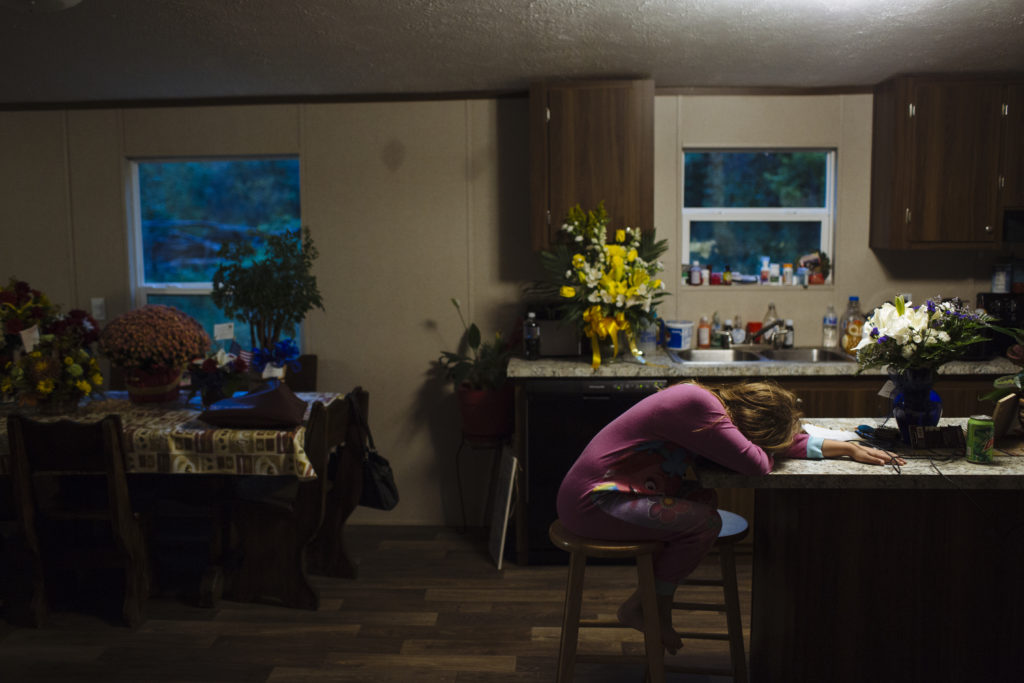 Raeleigh lays her head on her great-grandmother’s kitchen counter the morning after her great-grandfather’s funeral. She dreaded returning to school after several days off following Raleigh’s death. 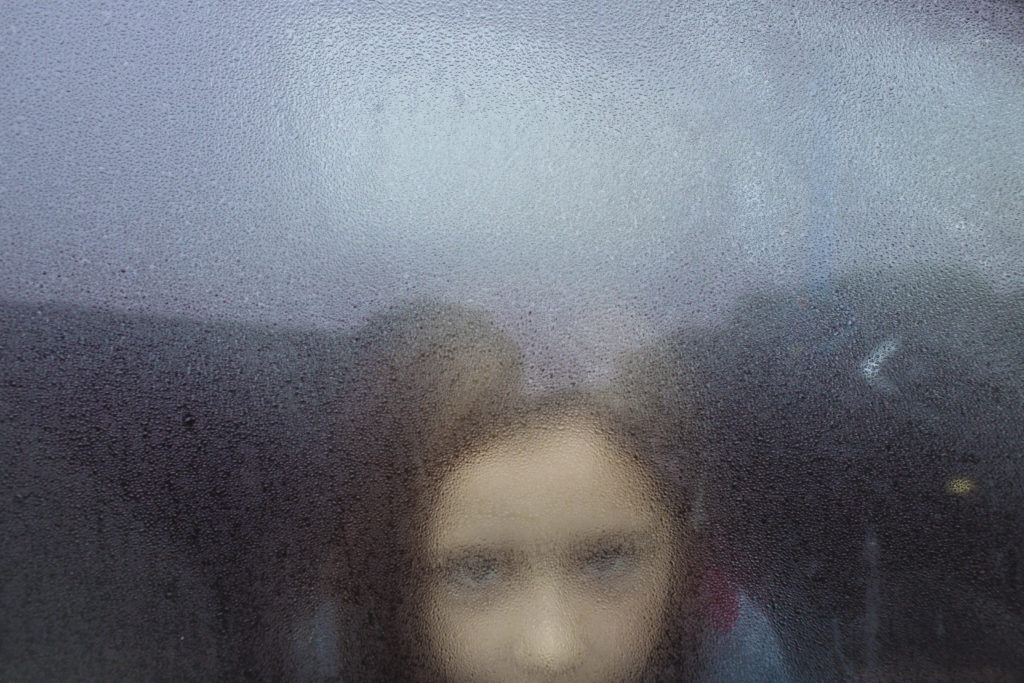 Raeleigh peers through the dew-covered window of her paternal grandmother’s car at daybreak before going back to school.

She now begins to explore life without Raleigh.

Longevity, quality and turning back the clock

MY NAN WAS an active, outgoing, engaged senior citizen. She gardened, kneeling on a foam pad to protect the skin of her knees and her fragile bones, honeycombed with osteoporosis. She read books, the newspaper, did the crosswords. She looked after her neighbours’ children for an afternoon here and there, keeping those exuberant little minds... Read more

Magical thinking and the aged-care crisis

HOW DID AUSTRALIAN aged care reach its current nadir? Countless inquiries and reviews have probed this question; postmortem after post­mortem has dissected the policy and regulatory failures that have wrought the present abysmal state of affairs; a surfeit of recommendations have been handed down; revised guidelines and principles adopted; advisory committees formed; stakeholders consulted – yet here... Read more