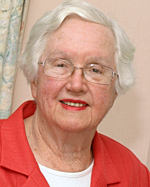 Margaret Mittelhauser (25 July 1931 – 27 December 2013) was the first woman to be registered as a stockbroker in Australia and was one of the first female stockbrokers in the world. Over her extraordinary fifty-year career, she conducted business across the globe and became a role model for women in the finance industry. She also made many significant contributions to arts and charitable institutions, including the Queensland Art Gallery and the Australian Federation of University Women, and was a great supporter of Griffith Review.

In 1996, Margaret was made a member of the Order of Australia for her service to the finance industry and to the community. She received the honorary degree of Doctor of Philosophy from the University of Queensland and in 2003 was awarded the Centenary Medal for distinguished service to business and commerce. In 2006, Griffith University awarded her the honorary degree of Doctor of the University.