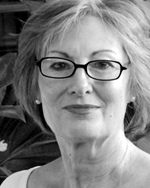 Born in Zimbabwe and based in Perth, Tangea Tansley is the author of several books including the newly released novel Out of Place (2014) and the critically acclaimed A Break in the Chain:The Early Kozminskys (2011).
Her short stories, essays and articles have been broadcast on ABC Radio National and published in national and international journals, magazines and newspapers.
She was joint-winner of the 2013 Todhunter Literary Award for one of her short stories while others have been anthologised and shortlisted in other national awards including the Julie Lewis and the A B Natoli. She is also the winner of the Launceston Tasmania Literary Award 2015 for her short story, My Mother Was A Russian Spy.
She has a background in magazine editing and publishing, journalism and university lecturing.
She can be contacted through her website.

What’s this thing called sex?
Edition 33: Such Is Life