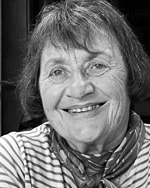 She published widely on film, media and cultural politics, and worked in print and broadcast journalism, the film industry, in universities and adult education programmes.

Her work includes the multi-award-winning The Archibald Paradox, a study of the early Sydney Bulletin and its first editor; the group of stories and essays, How Simone de Beauvoir Died in Australia, which won the Gleebooks prize for 2003, and The Outside Story, a novel centred on the Sydney Opera House.