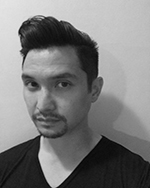 Miguel Syjuco is from the Philippines and the author of the novel Ilustrado (Vintage Australia, 2010), which won the Man Asian Literary Prize and a New York Times Notable Book of the Year.

He writes about topics unsuitable for the polite dinner table: politics, religion, sex and human folly. His forthcoming second novel, I Was the President’s Mistress!!, trains its crosshairs on the powerful and corrupt in his home country.