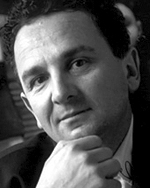 Louis Nowra was born in Melbourne and studied at La Trobe University without taking a degree. Nowra worked at several jobs and lived an itinerant lifestyle until the mid-1970s when his plays began to attract attention.

Nowra is best known for the many plays that he has written since that time, but he has also written film scripts (including adaptations of his own work), plays for radio and television, novels and autobiography.

Nowra has held administrative positions in several theatre companies, directed a number of productions and translated several plays for the Australian stage. In collaboration with his first wife, Sarah de Jong, he has written the music for his plays and other productions.

In February 2003 Nowra married writer Mandy Sayer with whom he had published In the Gutter Looking at the Stars: A Literary Adventure Through Kings Cross (2000). Nowra's work has won a number of awards and Nowra has been a writer-in-residence and lecturer at the University of Queensland.