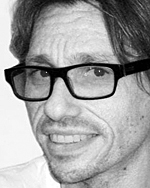 Jorge Sotirios was born in the shadow of Bradman Oval in the Southern Highlands of NSW and worked at his father's Mittagong cafe when not obsessively following the St. George Dragons.

Since then he has travelled the globe as travel journalist covering the Arts, the Environment, Politics and Culture and has written for the Sydney Morning Herald and The Australian Literary Review.

Part philosopher, part adventurer and always the clown, Sotirios has travelled to 30 countries working as a foreign correspondent.

Lonesome George Cést Moi! (Big Sky Publishing, 2012) is his first book and recounts his travels in South America during 2004-2005. A captivating story told with comic flair – romance, broken hearts and self exploration – told with wry humour while illuminating the beauty and culture of Argentina.

Lost city of the Amazon
Edition 20: Cities on the Edge

Who cares for Cohen?
Edition 29: Prosper or Perish

A good sport
Edition 36: What Is Australia For?