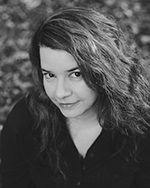 Her debut novel, Darkness on the Edge of Town (HarperCollins, 2012), was shortlisted for the 2013 ALS Gold Medal, and her non-fiction work has appeared in many Australian publications.