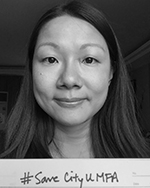 Jenn Chan Lyman is a fiction and non-fiction writer based in Shanghai. She has a BA in comparative literature from Stanford University and an MFA in creative writing from City University of Hong Kong. She has been published in the anthology The Queen of Statue Square (Critical, Cultural and Communications Press, 2014) and Salamander Magazine’s Winter 2012-13 issue. She was a finalist for Glimmer Train’s May 2012 Short Story Award for New Writers and received a nomination for the Pushcart Prize in 2013.