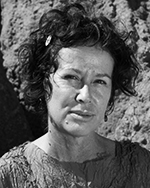 Jacqueline Wright has been published in Bodylines, Summer Readings, Kimberley Stories, Summer Lovin’, Knitting and other stories and Purple Prose. Her first novel, Red Dirt Talking (Fremantle Press, 2012), was written as part of a creative arts doctorate at Curtin University and earned her first prize in the TAG Hungerford Award (2010), and in 2013 was long-listed for the Miles Franklin Award and short-listed for the Dobbie Literary Award. Parts of Red Dirt Talking have also been adapted for radio and stage. She now works as the ABC Open producer for the Kimberley.