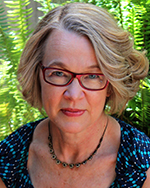 Gabrielle Carey published her first co-written book, Puberty Blues (McPhee Gribble), in 1979. She has since written In My Father’s House (Picador, 1992), a biography of her father; Waiting Room (Scribe, 2009), a memoir of her mother; and a book of personal essays, So Many Selves (ABC Books, 2006). Her most recent book, Moving Among Strangers (UQP, 2013), was the joint winner of the 2014 Prime Minister’s Award for Non-Fiction and shortlisted for the 2015 National Biography Award. She teaches non-fiction writing at the University of Technology, Sydney.

On being Australian
Edition 51: Fixing the System