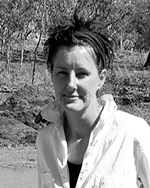 Catherine McKinnon lives in rural New South Wales and is a novelist and playwright/director.
She grew up in South Australia, and, after studying at Flinders University, worked at the Red Shed Theatre, State Theatre Company, and Adelaide Festival as a theatre director and/or writer. Her own plays produced for the Red Shed Theatre are Immaculate Deceptions, A Rose By Any Other Name, Road to Mindanao, and Eye of Another. In 2006 she won the Penguin Women’s Weekly Award for her short story 'Haley and the Sea' and in 2008 Penguin published her novel, The Nearly Happy Family. Her play Tilt was selected for the 2010 National Playwriting Festival, and As I Lay Dreaming won the 2010 Mitch Matthews Award.
Her short stories, reviews and scholarly articles have appeared in Transnational Literature, Text Journal, RealTime and Narrative. She currently teaches performance and creative writing at the University of Wollongong. Her novel Storyland (Fourth Estate, 2017), which developed from her novella 'Will Martin', was longlisted for the 2018 Miles Franklin Award.