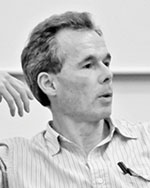 Andy Merrifield is an independent scholar based in the UK and France.

He has a doctorate from the University of Oxford and is author of numerous books, including Metromarxism (Routledge, 2002), Dialectical Urbanism (Monthly Review Press, 2002), The Wisdom of Donkeys (Walker Books, 2008), Magical Marxism (Pluto Press, 2011), The Politics of the Encounter (University of Georgia Press, 2013), and The New Urban Question (Pluto Press, 2014).

His many reviews and essays have appeared in The Nation, Harper’s Review, New Left Review, Dissent, Radical Philosophy and Adbusters.

His latest book, The Amateur, is forthcoming with Verso in 2017.

Notes from an underground future
Edition 52: Imagining the Future