THE ROAD TO the Neon Boneyard is littered with evidence that even the glitz and wealth of Las Vegas is not immune to the economic downturn so evident in other American cities. Our cab driver, Bryan, is from Denver. A sardonic white man in his sixties, he looks like he hasn't slept for a month. He came to Las Vegas looking for a job after the company he worked for in Colorado closed its doors. He is typical of the taxi drivers we encounter on this trip, all older men, often with dramatic histories, still working despite their age. We were ferried to the airport in New Orleans by an ailing but affable eighty-three-year-old former police officer who had served his country in Korea. I asked why he was driving a cab, and not retired on his police and Navy pensions. His grimace spoke volumes.

Bryan wearily points out places that might interest the kind of anti-tourist who is willing to pay $25 to be driven to a dusty lot on the edge of the desert to see a bunch of old signs. He has not visited the Neon Boneyard, but he knows of it. We pass a pawn shop with a huge queue outside, stretching around the block.

'That's where the reality show Pawn Stars is filmed,' he says dryly. 'You seen it?'

I tell him I've never heard of it.

'You ain't missing much. Folks queue out here in hundred-degree heat just to catch a glimpse of their favourite staff member. Load of bullshit, if you ask me.'

I hadn't, but I concur. I ask him if Vegas was hit hard by the recession.

'Sure, lots of places closing down and houses getting foreclosed on. Great time to snap up property if you got the money.'

As we glide through the morning traffic on Las Vegas Boulevard Bryan points out the Fontainebleau casino resort, a shimmering ice-blue tower that has lain dormant for almost two years.

'Seventy per cent complete and then they ran out of money,' Bryan snorts. 'The lobby's always the last thing they do, and it never got built. No one's ever set foot in the place.'

Further along the strip on the left is an enormous skeletal structure that stretches for several blocks. The steel girders look weather-beaten and are covered in a thick layer of red dust. Bryan tells us another casino complex was planned for the site, but its developers went bankrupt early on. In a city pregnant with possibility these metal dinosaur skeletons are an ever-present reminder that fortunes are won and lost here every day, and more often lost.

BEFORE DROPPING US off at the Neon Boneyard, Bryan warns us to get out of town before the weekend. About 220,000 people are expected to arrive for the Electric Daisy dance music festival in the desert. Despite the prospect of lucrative $50 fares from the airport to the site, Bryan is contemplating taking the weekend off. He doesn't want to see the hedonistic excess of narcotics, alcohol and violence. (In fact, the festival goes relatively smoothly for its size - no deaths and only sixty arrests.) The event would generate $16.5 million in ticket sales over the course of a single weekend. In a city that revolves around large sums of money this is nothing unusual, but it makes our entry to the Neon Boneyard more poignant. This is where the multimillion-dollar casinos and hotels of the past have come to die.

A non-profit organisation started in 1996 to preserve the many iconic neon signs that have graced Vegas billboards and frontispieces since 1930, the Neon Museum houses most of its collection in the Neon Boneyard, a haphazard and mildly dangerous plot of land at the edge of the Mojave Desert. Around 150 signs are stored within its chain-link fence, varying in size from small individual letters to enormous facsimiles of creatures and people. Because these pieces are stacked precariously against each other in the open air, volunteer guides lecture visitors to the boneyard about the museum's strict rules. You must not touch the signs under any circumstances. You must not even go near them - advice that is frequently tricky to follow given the yard's cramped conditions. Neon is easily damaged, our small group is informed, and there are lots of sharp edges that will cause injury. Also, if you back into a sign as you try to capture a wide-angle money shot for the folks back home, well, there's a fair chance you'll never see the folks back home again. If one of these signs topples, there's nowhere to hide.

Despite the museum's fifteen-year history, it is only recently that the public has been allowed access, and permission must be gained months in advance. A visitor centre is under construction in a beautiful but dilapidated futurist building that was formerly the curvaceous lobby of the La Concha Motel. The museum's local volunteers hope this will one day be a thriving tourist attraction. One glance beyond the yard's limits to the shimmering empty desert, wind whipping the sand into mini-tornadoes that dance in the heat haze, and you have to wonder who but the most foolhardy visitors to the city will venture this far from the sleaze and artifice of the main strip. This is not really why people come to Vegas.

Not one of the signs is operational. Even if they were, there is no electricity here. Though our guide has warned us about the heat inside the yard, a good 10 degrees Fahrenheit higher due to the mass of coloured metal roasting in the sun, it is still shocking. Our small group huddles under three broken umbrellas, jostling for inches of shade. The temperature is almost 45 degrees Celsius, something I have experienced in Australia but not like this, where the mere act of opening your lips to drink is enough for the heat to claw its way down your throat and greedily suck you dry from the inside. We say little, except for our guide, who talks constantly about the signs. It is hard to pay attention when you are concentrating on not passing out.

Amid the chaotic jumble of faded signage are some iconic names that recall a bygone era of gangsters in sharp suits and old Bond movies: the Algiers Hotel, the Golden Nugget, the Desert Inn. Signs are all that remain of these former destinations brought to fame by celebrity guests and Mafia connections. The Desert Inn was blown up in 2000, just after celebrating its fiftieth anniversary. The original Ocean's Eleven was shot there in 1960 and six years later Howard Hughes came to stay for ten days, renting out the top two floors. In typical Hughes fashion, he refused to leave after his booking expired, clashing with hotel management, who had several high rollers waiting for their rooms. Hughes solved the crisis by buying the hotel for $13 million.

THE TOUR IS brief but illuminating. Our guide is conscious of the extreme heat and that we have drunk all our water. She does not want anyone to drop dead. I wonder how many of the Electric Daisy ravers will die from dehydration and am later pleasantly astonished to discover that none did. After twenty minutes of Boneyard wandering we are ushered out in silence, defeated by the sun, the only visitor to Vegas who always wins.

Finding a taxi back into town is near impossible and for a while we face the prospect of a long, possibly fatal walk to the nearest bus stop until a couple on the tour offers us a lift partway back. They are locals, out for a daytrip on their day off. They lost their house a year ago, when the bank foreclosed, and are now renting a cheap apartment and licking their wounds. The ten-minute air-conditioned car ride to the bus stop feels like heaven. Behind us the gates to the Neon Boneyard are locked, its treasures safe and immobile, sentinels of desperation and bitterness, of what passes for culture in a town where hope lives eternal, and is almost always dashed.

I find myself wondering what extraterrestrial visitors might make of our civilisation should they land their spacecraft in Nevada a thousand years from now. This place with no history, where rain never falls, will still be here long after the humanity that teems through its streets is gone.

Like Ozymandias, the Neon Boneyard will be a marker of our passing, our decadence, our folly. 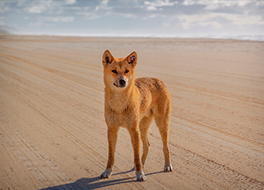 ERIN HORTLE: In Tasmania, there is a place where female octopuses emerge from the water and make their way across an isthmus, with a highway running across it, in search of habitat to extrude their eggs. Luckily, on the other side of this isthmus, there is such habitat – vast systems of sea caves – and... Read more