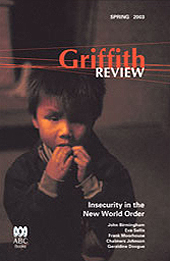 LAST YEAR, I walked through the ruins of a Crusader church high on a hill in Palestine.  A fire had burned outside this church as one link in the great chain of fire that signalled Jerusalem had been won from Muslim control. Thanks to French archaeologists, I could see mosaic images, an ancient well – signs of Christian life a thousand years ago. But a dark stain splashed across the stone under the main lintel was evidence the place still had calling power. A hook was set in the lintel and here, I learned, people continued to come, Christians and Muslims, to slaughter animals in invocation.

The church stands on the periphery of the only remaining entirely Christian village in Palestine, one that is contiguous with a Muslim village and surrounded by 19 others. Even the press of Israeli control and the urgency of their common condition do not eliminate the villagers' need to guard centuries-old habits of co-operation and friendliness: in the circumstances extremists can be persuasive. The Christian village, Taybee, works hard at hospitality, keeping its school open to Muslims, its health service responsive to the needs of everyone in all the surrounding villages. The priest urges inclusive Palestinian identity and non-violent resistance via newspaper column, website, pop song, television and street demonstration.  Since unity implies strength, in this one place Eastern and Western Christians celebrate their feasts together, Christmas according to the Western calendar, Easter according to the Orthodox.

Up on the hill though, there is no strategy: among the ruins there is just presence. Whose presence is not articulated. It is probably St George, whose willingness to intercede for all Arabs might be hoped for, despite his miraculous intervention in the Crusades. In any case, when there is something really worth praying for, the ruins are the place to go and when the animal is killed, the meat is distributed to the poor. There is too much intent and work in this for it to be mere superstition: in this sad corner of the world Christian and Muslim villagers share, at a deep imaginative level, a sense of ultimate efficacy. I hope that this powerful imagination, which thrives on inherited memory, stands them in good stead.

All over Australia there are scatterings of Christians studiously reading their Bibles and working to wrest East Jerusalem from a Palestinian future. On the way home to Melbourne I sat across the aisle from a group of Australians who turned to their Bibles in the intervals between sleep and refreshment. They had been in Israel to mark, in Christian manner, the Jewish feast of Succot; they were in Israel with 5000 other Christian visitors to celebrate the working out of God's promises in the 'ingathering' of the Jews.

These Christians read the Bible as a script for the unfolding of contemporary events and already they were looking ahead to the coming war. Their host in Jerusalem was the International Christian Embassy (ICEJ), an evangelical Christian organisation established in 1980 'to comfort Zion'. We proclaim a message to Zion that her modern day restoration is not a historical accident, but the fulfilment of God's word (Ezekiel 36:24-26; Luke 21:24). A time of great glory awaits Israel even though dark times may precede the break of day. Vision will not fail and from a Jewish Jerusalem, the Lord's law will go out and the 'nations shall not learn war anymore' (Isaiah 2:1-4).

To the ICEJ, Israel's existence through a United Nations resolution confirms the accuracy of the Bible, which is warrant then for East Jerusalem as the capital of Israel. The ICEJ has an office in Brisbane, one of 114 offices around the world that recruit support and raise funds in solidarity with right-wing Zionist ambitions for Israel.

On the surface, it looks like romance, this dream of Zion, but so focused and pragmatic a purpose requires only street directions or a map. There is no story inside the cover. As they sunder Palestinian Christians from their land and, in effect, from their texts and traditions as well as from Jews, the 'join the dots' readers of the Bible sunder story from the Bible. Story does not work for them: they do not hear – they will not hear – the stories of Palestinian Christians or Muslims.

Instead they brought 56 jumbo jetfuls of Russian Jews to Israel – and were reputedly impervious to their storytelling as well, judging by popularly held doubts about the Jewish credentials of every Russian immigrant. The ICEJ and its followers are like all fundamentalists, including those who would have us follow the rules about refugees: street maps and manuals and schema are their favoured texts. If, like them, you cannot hear stories and you are busy following directions, then you will not want conversation either, especially where you cannot just choose your conversation partner.

Critic Gabriel Josipovici, in The Book of God: A Response to the Bible, describes the Bible as full of conversation, with a God who likes to chat. Trouble comes about when people try to bypass dialogue with this God, to become like God. Uncertainty, the biblical stories are telling us, that is our condition, and finally what you have to do is walk in God's way – and talk.

THERE IS A popular schema that describes a clash of civilisations. Just two are in conflict, Christian and Muslim – Jews are left out because they do not qualify as a civilisation in the terms of this particular schema, but then neither Buddhist nor Hindu matter just yet either. A variation on this schema presents the paradox that the clash arises partly because Christian and Muslim resemble each other – in the bits that moderns do not like about either Christianity or Islam, the bits that deal in concepts such as truth and authority.

For me, the problem with this thesis is not just its failure to represent the diversity of both traditions; it actually strips them of imagination. Christianity and Islam become geography, economy, the military, imperial ambition, defeat and hegemony. The religious meaning that fuels imagination – and its capacity to imagine and even identify with the other – is left unexplored. All you are left with is geography and economy, and military.

An alternative model is also doing the rounds, that of the three Abrahamic religions. Given life in conversation between members of the three faiths, it risks clubbiness since no one else fits in but, since the conversation is propelled by a story, imagination comes into play and perspectives are widened.

At meetings in Melbourne and Sydney recently, Jews, Christians and Muslims have each told the story of Abraham, the patriarch of the biblical Book of Genesis, in fascinatingly different ways. Jews and Christians agree on the facts of the story, but here the Jewish speaker embroidered the biblical text with Midrashic tale: the story 'after the story'. For the Christian, who could be said to have read from 'within the story', Abraham was type (of fertility emerging out of sterility) and the reader or listener the antitype. For the Muslim the facts differed according to the Qur'anic version and he spoke of an idealised Abraham, an exemplar of virtues, unlike the Abraham of the biblical text. In a sense, in his telling of the tale, the Muslim speaker stood 'outside the story'.

One story, three ways of reading, multiple meanings. I have a sense that becoming familiar with these various versions of the tale will, in the end, tell me more than the 'clash of civilisations' thesis. At some point in the storytelling, eventually, we will talk about and be familiar with the points of real difference in the stories and the nuances of our relations to them.

In the absence of familiarity, imagination assumes great importance. What a pity there is a 'road map for peace' rather than a story. It struck me when I was in Palestine that many Israelis could not know what it was like to live across the road in a West Bank town or village under occupation and that to live in those Jewish settlements that gaze down on refugee camps you would have to be devoid of imagination. It worked both ways: hardly a Palestinian I met had been in an Israeli house. One or two had visited one, once, a long time ago. The lessons of familiarity take time.

THESE LESSONS HAVE been brought to Australia by some immigrant groups. Take the Ethiopians, Australia's largest African community. Muslim Ethiopians contributed to the establishment of the Ethiopian Orthodox Church in Melbourne; Christians go to their Muslim friends' houses for the meal that breaks the Ramadan fast; some times they will host the meal. Ethiopians in Melbourne want to hold on to this familiarity, against a thrust towards separation that comes both from some religious sources who warn that that is forbidden and from Australians, who expect them to keep at some distance from each other.

In fact, the Ethiopians tell stories about themselves that make the idea of distance strange. In their liturgies, for example, the Orthodox carry staffs in imitation of Moses and they use a replica of the Ark of the Covenant. They dance just as the biblical Jews might have danced before the Ark. Muslim and Christian quote the story from the Qur'an about the Christian king who gave refuge in Ethiopia to Mohammad, so that Islam lived.

Both Christian and Muslim see themselves as the children of Abraham, who journeyed out of Ur of the Chaldees. They are all descendants, with Jews, of those ancient Babylonians who had their eyes fixed on the skies and the stars, carrying an understanding of the world as limitless and of a God who embraced all. For the Ethiopians, for Iraqi people who try to build a pluralist future out of their inheritance for all of us, stories such as this unlock the imagination and prod it with narrative impulse into discernment and empathy.

Gabriel Josipovici, The Book of God: A Response to the Bible, New Haven and London, Yale University Press 1988

http://www.abc.net.au/rn/relig/enc/stories/s510312.htm  Gabriel Josipovici explains his attachment to the Bible in this Encounter program