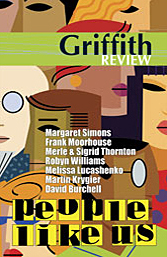 THE CURRENCY IN Australia is comedy. We rely on it, we use it in every situation, we convert everything into it. The only television programs that become part of our long-term cultural identity are comedies – Graeme Kennedy's In Melbourne Tonight, The Mavis Bramston Show, The Comedy Company, The D Generation, Kath and Kim. Light dramas like Neighbours do not enter the collective unconscious in the same powerful way as do these comedies.

We are avid for humour, we tell jokes, we are witty, we discuss Rove around the water cooler and we are delighted when we find a funny film that connects strongly with us. We feel that it unites us with acquaintances and relatives.

We don't do tragedy. Not the way the Russians or the Indians or the Chinese or the Japanese or the British do. One reason is pretty obvious. We've had a pretty easy run since 1788. The only tragedy that we've "officially" recognised and incorporated into our cultural history and understanding is the Gallipoli invasion. The best we can do with the rest is to turn it into light entertainment, shallow drama, which we enjoy and which we do well, but it doesn't charge us up the way comedy does. Ned Kelly and the Eureka Stockade are just good yarns. ABC radio continued to broadcast cricket on the day of the Bali bombing.

When you look at Australians being funny, being amused by others, swapping blonde jokes or talking about their favourite comedies on television, you see people transformed. Their bodies are energised, their eyes are alight, even the quiet and the passive start to talk.

It's easy to guess how this happened. Faced by a huge continent, so alien and desolate, knocked around by droughts and bushfires and floods, early immigrants responded with comedy. It was an intelligent response. It helped the society to survive and eventually to prosper.

Comedy has also helped to give us a national identity. The cartoons in Smith's Weekly, the humour of Mo, the movie The Castle, caused a great outpouring of delight as Australians recognised themselves and recognised that they belonged to something.

Something intangible, even indefinable, but undoubtedly Something.

For many decades the cartoon unanimously applauded as Australia's greatest was from Smith's Weekly. Stan Cross drew two workers hanging from collapsed scaffolding, high above the street. One is gripping a girder with both hands, the other, in falling, has just managed to hang onto the first man's legs, but in doing so has dragged his trousers down. This causes the first man to look so ludicrous that the second man is laughing uproariously. The first one snaps at him, "For gorsake, stop laughing: this is serious!"

In the 1970s, Len Evans, in his column in The Australian, ran a competition to find the quintessential Australian joke. The winner went something like this: Two drovers are talking. One says to the other, "I'm taking 600 head from Goondiwindi to Mudgee next week." The other asks, "What route are you taking?" The first man replies, "Oh, I think I'll take the missus. She stuck to me pretty well during the last drought."

Australians are, I think, rather pleased by the images of themselves reflected by their humorists, even in the second joke, and there is something sycophantic about the way many comedians and cartoonists give their audience what it wants.

But I'm not particularly interested in analysing why we find these jokes funny or why we like them. What does interest me about our humour, which is of course strongly based upon British comedy, is its arrogance.

ALL BRITISH AND Australian comedy is based on an arrogant view of the world, a sense of superiority. Our laughter is directed at the ignorance, the lack of awareness, of the people in the joke. There are other factors, too. In the cartoon with the two men hanging above the street, moments away from death, we are pleased to think that this shows our Australian fearlessness, our iconoclastic approach to life. But we're also laughing at the ignorance of the men, just as we are in the joke about the drovers. We recognise their stupidity. We enjoy the fact that our recognition of it makes their ignorance of it all the more delicious.

Australians love John Cleese, who always seems to play a bully, though often or ultimately a failed or impotent bully. There is one moment in Fawlty Towers where Basil's bullying is successful however, and it is the episode with the German tourists. When one of the German women breaks down under the pressure of Basil's relentless references to the war, the comedy stops. There are a few horrifying seconds before the story recovers and continues.

If it's true that the best comedy is that which goes closest to the edge, then Fawlty Towers, in this respect at least, is great comedy because those few seconds prove just how close to the edge it sails.

All our favourite comic characters have this in common: that they have no awareness how bullying or stupid or lowbrow or naive or clumsy or unpopular they are, and thus we feel superior to them, and we laugh with delight at these fools. Basil Fawlty, Dad and Dave, Hyacinth Bucket, Ned Flanders, Kath and Kim, Mr Bean, Colonel Hogan, Maxwell Smart ... I could go on forever.

It's very similar to the way we regard our children, and helps explain why we like children so much: we feel superior to them.

WE HAVE A culture of arrogance, even if it is less obvious than that of some other societies, like the British and the Indian, but it sustains us nonetheless. For most of the 1980s I taught at Geelong Grammar, which had a significant number of students from Asian countries. The school prided itself on its accepting, multiracial atmosphere. But at student level, and to a considerable extent at staff-student level, the degree of acceptance of Asian students depended on how Westernised (Australianised) they became. It was almost a mathematical relationship. If an Asian student was fully Westernised – wore Western clothing, spoke pure colloquial Australian and liked the right music, he or she was totally accepted. Such students were often pointed to by staff as examples of how tolerant and multiracial the school truly was. But an Asian student who was only 90 per cent Westernised was only 90 per cent accepted, a student who was half Westernised was half accepted, and a student who was not Westernised at all was ignored by the Anglo children.

Language is usually the key. The voice of a character in comedy quickly reveals whether we can laugh at him or her or not. The man in the cartoon who says "gorsake", the drover who speaks of his wife as a root, the nasal accents of Kath and Kim and their frequent mispronunciations, the insistence of Hyacinth Bucket on being called "Bouquet" are all signals that these people are inferior to us in class, therefore can safely be assumed to lack awareness. This, in turn, gives us a licence to laugh at them.

In about 1970, I worked for a couple of years at Sydney Hospital. I was a young law student trying to earn some extra money and I was on one of the lower rungs of the hospital's social hierarchy ladder. I was a clerk in the casualty department, where I filled in forms, took money and, when things got quiet on the nightshift, helped the nurses by holding down or bathing or feeding patients.

One of the big events of the year was the Hospital Revue, a collection of comic songs and skits put on by the staff to raise funds. This played to packed houses in the Union Theatre for a three– or four-night season. Every year posters appeared all through the hospital asking for people to help with acting, writing, dancing and backstage work. One year I decided to get involved, so I went to the first meeting. As soon as I got there I realised my mistake. This was clearly an activity for doctors and nurses. There was no one from the cleaning department, no one from maintenance, no one clerical and no one from catering. I sat there feeling quite out of place. However, when lists were compiled I put my name down as someone interested in writing and I turned up to the next meeting, as instructed, with a couple of scripts.

One of the scripts satirised the use of acronyms by medical staff. Terms like CDA, CVA, PR, PF, IV and CCU peppered the conversations of the doctors and nurses, which may have made for greater efficiency, but either deliberately or accidentally helped create and preserve a mystique and was one of the things that stopped outsiders from becoming members of the privileged group of those who wore white coats or blue and white uniforms.

In my sketch I had characters speaking to each other with sentences like, "The PF in ICU needs a CXR and an FBC SAP."

As the sketch was read aloud, heads started to turn towards me. The expressions on the faces were not friendly. They were suspicious and hostile. When the reading finished there was an awkward silence for a moment. Then someone asked me, quite aggressively, "How do you know all this?"

The problem was not only that I had used their language but also that I had used it correctly. The medical terms were in the right context. It was incomprehensible to them that a callow youth who, as far as they knew, had no particular training in anything, had learned their secret codes.